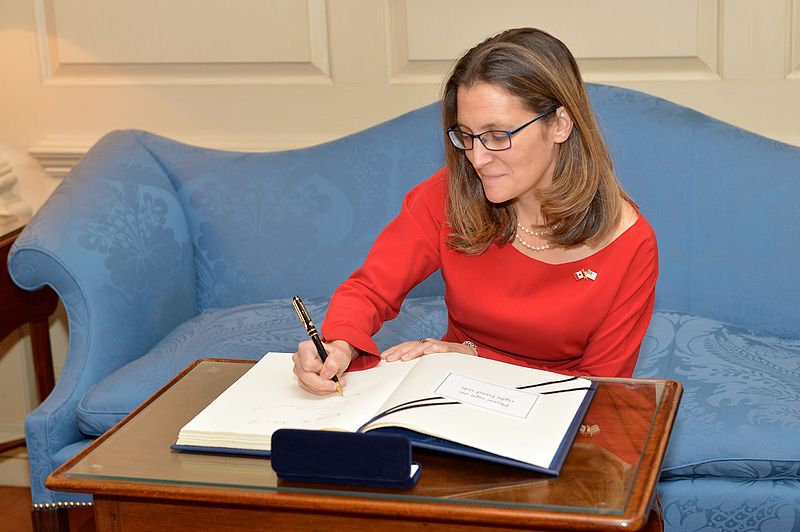 Through the numerous scandals faced by the Prime Minister and his cabinet during the last four years, Foreign Affairs Minister Chrystia Freeland has been a consistent beam of light for the Liberal banner. Over the course of her two years as Minister, Freeland has garnered praise from many for her adept handling of contentious international issues that arose during the first Trudeau mandate.

In Trudeau’s new cabinet, Freeland, who has been assigned the portfolios of Deputy Prime Minister and Minister of Intergovernmental Affairs, becomes the second most powerful politician in Canada.

Ms. Freeland was sworn in as Foreign Affairs Minister in January 2017, replacing veteran MP and former Liberal leader Stéphane Dion, who had been shuffled out of cabinet. Many analysts believed that Dion’s calm and soft-spoken demeanour was not a great fit for the position, which calls for a strong communicator and charismatic negotiator.

Freeland’s extensive experience working abroad as a journalist as well as her role in negotiating the Canada-E.U. trade deal made her a perfect fit for the position. The roles equipped her with the communication and negotiation skills necessary for this position. Additionally, Freeland had previously chaired the cabinet committee tasked with overseeing Canada-U.S. relations, making her a good bridge between the two countries.

Freeland became Foreign Affairs Ministers just days before Donald Trump was inaugurated as the 45th president of the United States. Throughout his campaign, Trump had signalled his intention to scrap NAFTA, which he saw as detrimental to America’s economic interests, and work towards a more favourable trade deal for the U.S. Against the backdrop of NAFTA – which has been the backbone of the Canadian economy ever since its creation – being scrapped, Freeland had the crucial task of renegotiating a trade agreement.

In spite of American hostility towards the renegotiation process, as well as the unpredictable nature of the administration, Freeland has been credited for achieving a new deal with her American and Mexican counterparts. With the new deal unratified, however, it is unclear whether or not it will be beneficial to Canadians.

One of the foremost legacies of Freeland’s time as Minister has been her success in expanding Canada-U.S. relations.  During the NAFTA renegotiations, Freeland developed amicable relations with key congressional leaders, governors and businesses all with strong interests in Canada to persuade a final decision on the deal.

Aside from advancing relations with the U.S., Freeland has sought to give Canada a prominent voice in South America. In the latter end of her tenure as Minister, Freeland has made political and economic crisis in Venezuela an important issue for the Canadian foreign affairs agenda.

Canada has become a central figure in the Lima Group, a bloc of nations in the Americas (excluding the U.S.), who are working towards promoting democracy in Venezuela. The group is aiming to mitigate the current crisis in Venezuela, which has also been affecting numerous neighbouring Latin American countries. Having propelled Canada to the forefront of this bloc, Freeland has portrayed her ability to extend Canada’s reach beyond the shadows of the U.S.

Despite Freeland representing a downtown-Toronto riding, she was born and raised in Alberta, with her family’s roots in the province running deep. Freeland’s grandfather was a canola farmer, while her mother has previously run for office as a New Democrat in the riding of Edmonton-Strathcona. In the wake of rising Western resentment towards the Liberals, strategists have been urging Trudeau to leverage Freeland’s popularity and Western roots in the region.

During the election, a blue wave swept Alberta and Saskatchewan which completely shut the Liberals out from representation in the two provinces. Both provinces, which make up the heart of Canada’s energy sector, have recently faced economic struggles and been the centre of environmental debates which have left many in the region feeling neglectful towards the Trudeau government. Collectively, this has sparked a growing sentiment of Western separatism which has adopted the name of Wexit.

In order to stifle the spread of the separatist movement in the region, the government’s top priority has been to address the concerns of Western Canadians. But with no Liberal representatives in either province, this is likely to be an uphill battle for the government. Yet whether Freeland’s influence will be enough to appease Western Canada will be closely monitored throughout the new government’s mandate.

Trudeau’s decision to make Freeland his Deputy – a cabinet position that has been left unfilled since 2003 – is a sign of the key influence she holds in the government. Her negotiating skills will surely be mobilized in an attempt at bridging the gaping regional divides. Furthermore, her appointment as Deputy Prime Minister could signal inevitability of a future rise to party leader.