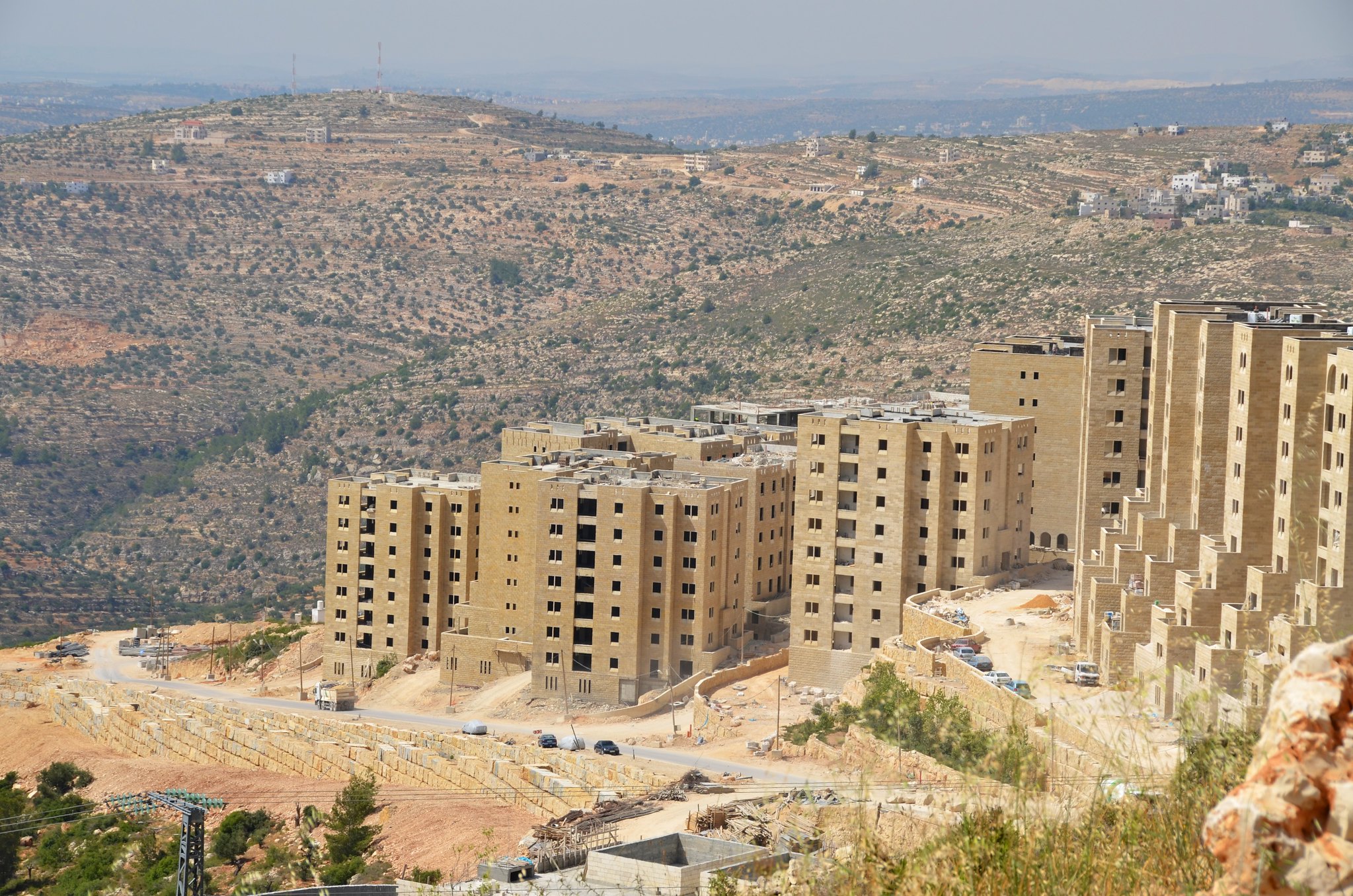 As the first planned city to be constructed within the Palestinian territories, Rawabi was but the idea of Palestinian billionaire Bashar Masri, until the beginning of its construction in 2014. With a current population of 3,000 people, Rawabi displays an infrastructural landscape that contrasts the traditional socio-economic environments that have developed under the oversight of the Palestinian Authority.

The novelty behind this Palestinian city arises out of the 1.4 billion dollars of private donation and private infrastructure that has sustained the city’s growth and functionality. Although Rawabi does have a political council connected to the Palestinian Authorities oversight within the region, services like garbage collection, water, and electricity are all provided by private industries.

The initial vision for Rawabi was provided by Palestinian-American billionaire Bashar Masri.  He has funded the project alongside the “real estate investment arm” of the Qatari government, which has donated nearly 1 billion dollars toward the project. Masri’s mission for developing such a city was to build Palestine’s new economic centre by settling middle-class families and young tech professionals within the region.

The demography for which Masri has marketed this project, alongside his utilization of private donations, has raised concerns among Palestinian activists. The primary concerns voiced by critics are based on Masri’s decision to consult and work alongside the Israeli government and Israeli firms to build the city, which they feel normalizes the Israeli occupation of the West Bank.

The private developmental framework of Rawabi has demonstrably attracted a particularly elite population. Without public infrastructure, or a public pocket to help fund this emerging city, the economy of Rawabi is primarily fueled by a commercial brand service sector, with companies like American Eagle and Louis Vuitton, alongside an ICT market comprised of American and Israeli firms.

Various economic obstacles that face Rawabi arise out of the institutional arrangements between the Palestinian Authority, the Israeli occupation and international donors. An emerging Palestinian elite, concerned less with political ideology and instead incentivized to build Palestine through globalized economic channels, is the likely inheritor of such institutional obstacles.

The Israeli military occupation has installed Israeli-only roads, as well as Israeli civilian settlements and military checkpoints throughout Palestinian territory. This has evidently created economic barriers to the political development of an independent Palestine. The consistent disruption of traffic throughout the West Bank limits the expeditious flow of resources that are needed to fuel a functional economy. The ramifications of the Israeli occupation have therefore limited the Palestinian Authority from developing its own sovereign economic institutions.

The current governing body of the West Bank, the Palestinian Authority, is run by the secular, a-militaristic Fatah party under President Mahmoud Abbas. There have been neither elections nor uprisings to challenge Abbas’ rule since he was first elected in 2005. Electoral norms are only a single facet of the many economic and political obstacles facing the institutional strength of the Palestinian state. The PA is cut off from a series of economic channels due to its loss of funding from Gulf states including Saudi Arabia as of 2012, alongside reductions in Israeli taxes being transferred in the past two years.

The West Bank is additionally severed into three separate regional jurisdictions based on the division of administrative and military jurisdictions between Israel and Palestine. Area C is controlled by the Israeli military and civilian administration, while it is additionally the largest region within the West Bank. Rawabi is part of Area A, and is under the security apparatus and civilian administration of the Palestinian Authority. However, due to the lack of free-flowing roads and public infrastructure between separate zones, Palestine receives its electricity and water from Israel. Therefore, a lack of basic infrastructural control has weakened the strength of Palestinian administrative sovereignty.

The Israeli occupation, alongside the institutional weaknesses of the Palestinian Authority, has evidently placed a set of obstacles regarding Rawabi’s urban development. Masri estimates that during construction, the Israeli occupation had delayed the project by a year and a half through the necessity of consulting with Israeli administration to oversee the implementation of an independent sewage system in Rawabi.

Rawabi’s growth through nearly 1 billion dollars from Qatar in private funding and investment from Israeli firms including Mellanox Technologies, displays a globalized city concerned with investment, rather than humanitarian relief for impoverished citizens. The city is, therefore, an appealing environment for what may be envisioned as a Palestinian elite capable of affording American luxury brands, British private schools and Israeli water treatment.

Palestinian refugees and the unemployed 15 per cent of the West Bank population are therefore excluded from the 1.4 billion dollar investment. There is no increase in welfare nor social security for the median Palestinian citizen through the creation of this master-planned city. Instead, a neoliberal ethos is migrating to Palestine through private infrastructure and international integration.

While Bashar Masri’s vision for the future economic hub of Palestine has met a series of developmental obstacles and societal criticisms, there are currently 3,000 citizens of Rawabi, with infrastructural support for 37,000 more. The influence of international brands such as American Eagle and Louis Vuitton has created service sector jobs in the region, while Masri plans to create Palestine’s silicon valley in Rawabi through the attraction of IT companies and international startups.

While Rawabi is privately funded, it is nonetheless giving rise to economic avenues for the development of the greater West Bank region. Although economic growth does not necessarily cause political-institutional development and greater governmental legitimacy, the migration of a globalized elite to Rawabi could entail the growth of international influence in Palestine.

Rather than trying to alleviate conflict through political instruments, an Israeli-Palestinian peace may find its greatest ally through economic avenues. Rawabi is a crucial step in creating a joint Israeli-Palestinian narrative for the future. With increased Israeli investments in Palestinian development, both parties’ interests are linked through a joint desire for a prosperous economy in Rawabi. This preliminary economic peace may disincentivize occupation, and could eventually lead to a place of further political cooperation between parties.