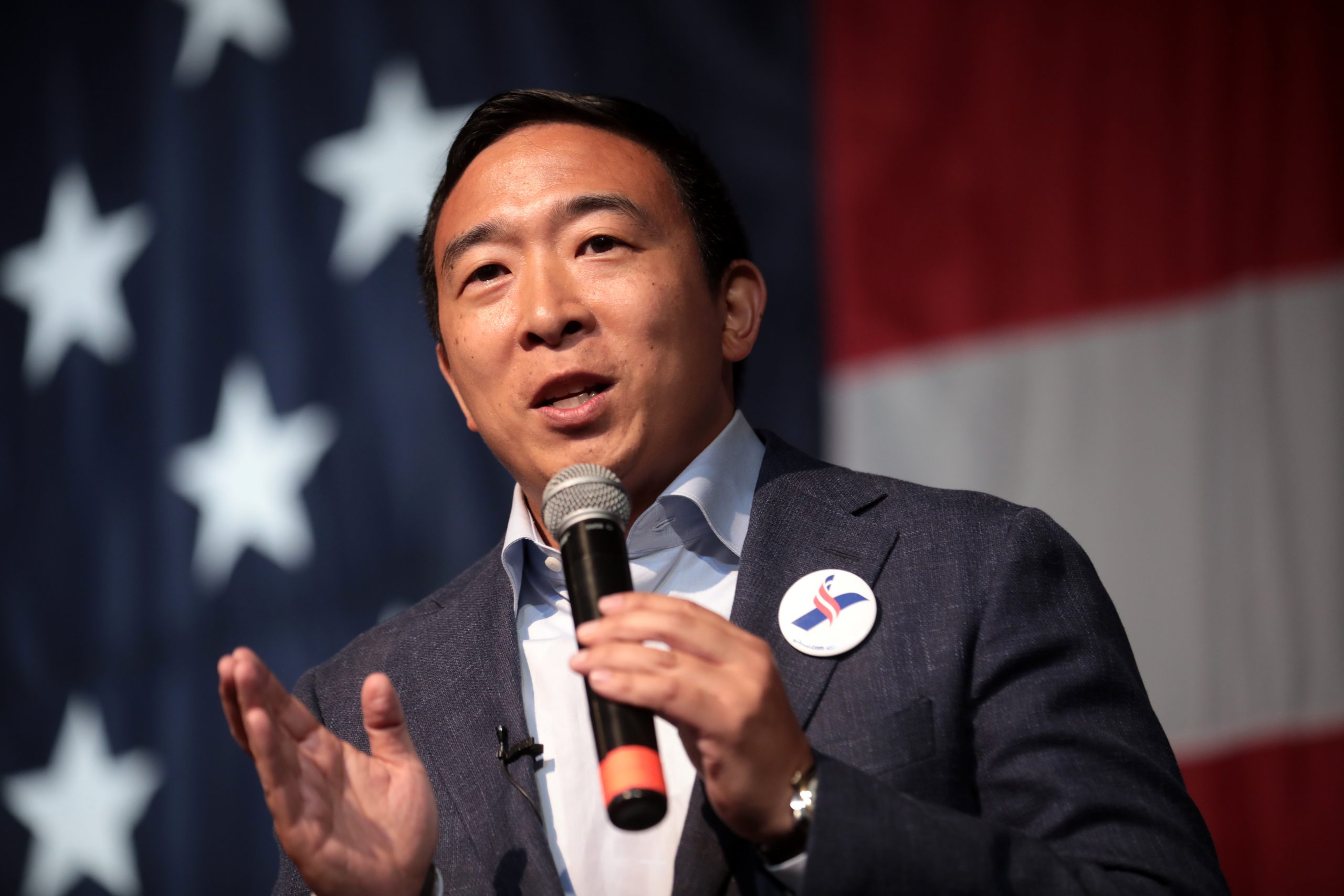 I was, like many others, first introduced to Andrew Yang, a former Democratic candidate for president, through a video on YouTube. Although it was a short ad, about 1 minute long, it was enough to peak my interest in his seemingly eccentric campaign. This led me to his famous podcast interview with Joe Rogan, which he had just completed (this was back in March of last year). What first drew me, along with millions of other people to join the group of Yang’s supporters (later to be known as the “Yang Gang”) was his unique way of approaching politics – no bluster, no rhetoric. He had a way about him, laying out problems frankly, employing facts unabashedly. It was a welcome respite from politics as usual.

When Yang first entered the field of Democratic candidates, he was a relative unknown in a group of senators, mayors, governors, and a former vice-president. His candidacy was treated by the media as a kind of weird novelty, an interesting political tidbit that they could occasionally cover, if anything, for the amusement of their readers and viewers. This sentiment was conveyed by  the title of a Washington Post article about Yang which read: “Random Man Runs for President.” For Yang, it seemed like he took this belittling media campaign as a licence to, as some commentators have put it, actually “have fun” on the campaign trail (crowd surfing with his supporters and spraying whipped cream into a fan’s mouth, for starters). After all, if the established political forces don’t take you seriously, then why bother with political convention?

Beyond his antics, Yang’s contribution to the American political discourse comes from the substantive ideas he articulated about problems facing the country and his solutions for addressing them. Yang, like most other political candidates, wrote a book before launching his campaign. And like most books, Yang’s “political treatise” if you will, is a story. Yang’s story isn’t about a particular person, political candidate, or social movement, it’s a story about what he calls “the normal person.” He creates this normal person by taking any statistical measure encompassing the American population and looking at the median value of that measurement. Then, he poses the question: how is this person, in the middle of the American statistical charts, doing? And the answer he arrives at: this person is not doing very well. [1] If you’ve ever wondered how Yang could so effortlessly sling out facts and precise statistics in speeches and debates, this knowledge was probably accrued during research for his book. The War on Normal People is chock-full of depressing statistics about the state of the American people. Things like: “41 per cent of displaced manufacturing workers between 2009 and 2011 were either still unemployed, or dropped out of the labour market within 3 years” or “For the first time, drug overdoses have surpassed car accidents as the leading cause of accidental death in the United States.” For Yang, these problems are inherently structural, and their boiling over is what led to so many Americans voting for Trump in 2016. [2]

Yang has proposed over 150 policies to solve the problems identified in his book, but his flagship proposal is undoubtedly the “Freedom Dividend” – a universal basic income (UBI) of $1000/month to every American adult for the rest of their lives. Yang runs the gauntlet in his arguments for the Freedom Dividend; it helps that UBI is a relatively non-partisan policy idea, garnering support from both “left-wing” thinkers like Andy Stern (former head of Service Employees International Union) and “right-wing” thinkers like Charles Murray (conservative economist).

The arguments that Yang gives for UBI depend on the political leanings of his interviewer. For instance, when he was on The Ben Shapiro Show, he defended UBI as a way of replacing the myriad of inefficient and demeaning welfare programs. When he was interviewed by Rising’s Krystal Ball, he argued that UBI would be a way of recognizing the work of stay-at-home parents and caregivers, in a way that the traditional economy doesn’t. The versatility of his arguments for UBI allowed Yang to talk about it non-stop. Yang’s impact in pushing this conversation forward is apparent. UBI, which only 5 years ago was a fringe idea, now has the support of 66 per cent of Democrats and 30 per cent of Republicans.

Of course, Yang is by no means the perfect candidate (who is?), and as his campaign progressed, he did do some politician-like things, like flip-flopping on Medicare for All. When I finally saw him in-person at a rally at Dartmouth College in early February, the larger-than-life figure I had envisioned from watching all those YouTube videos seemed, for lack of a better word, tired. He had suffered devastating results in the Iowa caucuses (he garnered only 1% of caucus votes) and it seemed like he knew the end was nigh. And sure enough, two days later, he announced the end of his campaign.

Ironically, Yang, who received little media attention during the course of his campaign, suddenly became a media sensation after he dropped out. But what he contributed to American political discourse is reflected with or without the media spotlight. He presented to us a new way of approaching politics, one which is laser-focused on solving the problems at hand. As Jeff Yang (no relation to Andrew Yang) wrote in a CNN op-ed: “The promise that in America ‘anyone can grow up to be President’ has never felt more real, and for that, Andrew Yang deserves our thanks.”

[1] Yang, Andrew. The War on Normal People: The Truth About America’s Disappearing Jobs and Why Universal Basic Income Is Our Future. New York, NY: Hachette Books, 2018.