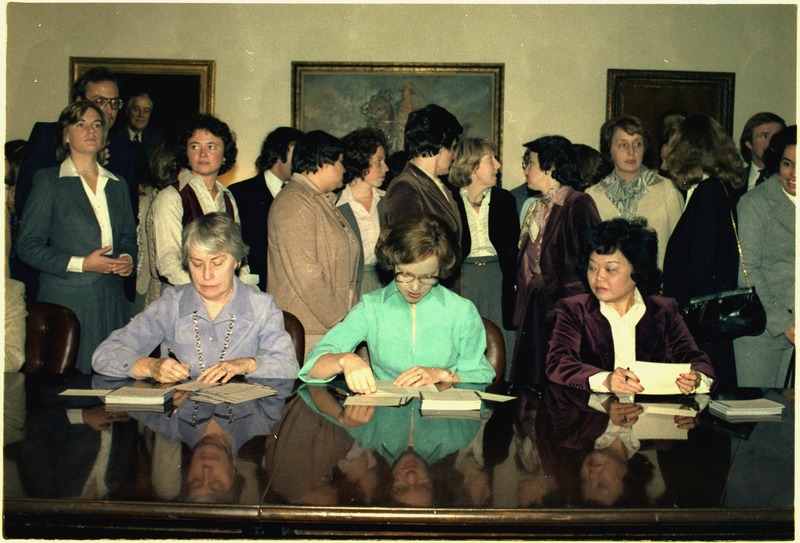 On January 12th, both houses of the Virginia legislature approved the ratification resolution of the Equal Rights Amendment (ERA). The following day, the US House of Representatives voted to extend the deadline for ratification. Nancy Pelosi, Speaker of the House of Representatives, called February 13th a “historic day” and the progression of the amendment “pretty exciting.” Meanwhile, conservative groups pejoratively dubbed the amendment the “Everything Related to Abortion act.”

In order to understand how a three-sentence-long amendment written nearly a century ago has been able to make waves across the American political scene in 2020, one must examine the complex, yet strikingly stagnant, 97-year-old debate surrounding the act.

History of the ERA

The ERA was first proposed in 1923 by the National Women’s Party. The amendment was drafted by Alice Paul, a suffragette in the early 1920s, following the ratification of the 19th Amendment to the U.S. Constitution that extended the right to vote in America to white women.

Following the rise of second-wave feminism, the ERA gained significant momentum in the legislative system in the 1970s. In 1972, Congress passed the amendment. However, in order for an amendment to succeed in becoming a part of the Constitution, three-quarters of the states (38 out of 50) must approve it.

The Case for the ERA

The case for the ERA is made clear by the first line of the amendment itself: “Equality of rights under the law shall not be denied or abridged by the United States or by any State on account of sex.”

In this way, the ERA, according to those who support it, is meant to provide explicitly equal protection of both sexes under the US Constitution.

Currently, the only right the Constitution explicitly extends to both men and women is the right to vote. The ERA would guarantee equal legal rights for all US citizens. Proponents of the proposed amendment argue that, as a part of the Constitution, the ERA would require states to intervene in cases of gender-based violence and pregnancy discrimination while also federally guaranteeing equal pay.

The Case Against the ERA

Opponents who oppose the ERA outright have argued against the amendment using many classic socially conservative talking points. Among other things, they argue that the amendment would undermine family values, impede on religious practice and lead to the outlawing of sex-segregated facilities such as bathrooms and dormitories. Many also posit that the ERA would open the door for more pro-choice abortion laws.

Many of these social conservative arguments regarding the ERA can be traced back to Phyllis Schlafly. Schlafly was a prominent anti-feminist figure in the 1970s, when the amendment was experiencing a comparable period of debate. Her arguments have resurfaced in recent state legislature debates and cultural conversations.

Additionally, arguments that do not explicitly undermine the values of the ERA have been prevalent in the debate surrounding the amendment since its beginning. Some argue that the amendment is unnecessary, because the 14th Amendment already legally ensures equal treatment for all citizens.

Most recently, opposing groups and figures have argued that the campaign for the ERA has run its course and a new, fresh legal measure should be promoted instead.

Just this month, prior to the House vote on February 13th, Supreme Court Justice Ruth Bader Ginsburg suggested that, with the deadline expired and the campaign for ERA being decades-long, the effort to ban discrimination and inequality on the basis of sex should start anew.

Justice Ginsburg exemplifies the complexities of the argument against the ERA as she is a longtime supporter of the amendment, yet she subscribes to the notion that there is too much controversy regarding states which have ratified after the deadline.

While congressional Democrats and supporters of the ERA celebrated the February 13th vote to extend a deadline for ratification, the amendment will likely be rejected in the Republican-controlled Senate. Senate Majority Leader Mitch McConnell made clear that he is “not a supporter” of the resolution when asked if he would allow it to come to the Senate floor.

Therefore, although legal precedent in legislature demonstrates that revoked ratifications tend to be counted regardless, the fact that five states rescinded their ratifications has thrown a wrench in the process to make the ERA an official part of the constitution.

Put differently, it is likely that opponents will challenge the amendment on the basis of the constitutional grey area that has resulted from Virginia’s ratification and five states revocation of the amendment.

Consequently, in the coming months, it is unclear whether or not political proponents of women’s’ equality will begin to side with an alternative or continue the fight for the ERA.