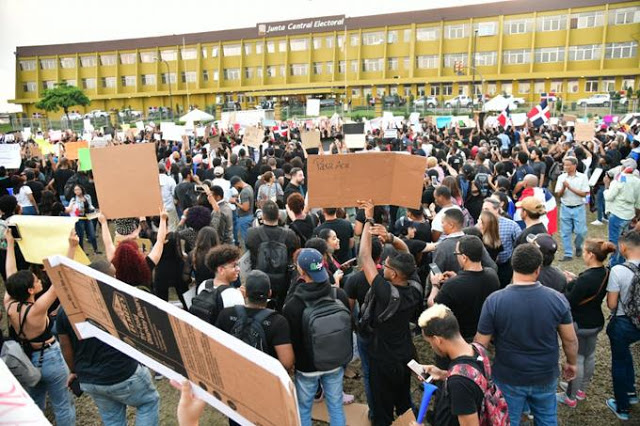 After months of debate and political tension, Dominicans woke up on February 16th expecting to cast their votes in the country’s municipal elections. Instead, voters were surprised when the Junta Central Electoral (JCE), the country’s main authority regarding electoral processes, announced that the elections were to be suspended until further notice. This event has submerged the country into an electoral crisis.

The events of Sunday, the 16th

On Saturday night, the JCE called a meeting with representatives from political parties, the Organization of American States (OAS) and the International Foundation of Electoral Systems (IFES). Announcing that failures in the voting system had been reported, it was agreed upon by all parties that the JCE would fix the issues on the morning of the elections.

Soon, however, it became clear that the problems with the voting machines could not be resolved before ballots were to be cast. Due to an apparent technological error, most candidates did not appear in the interface of the voting machines, limiting the ability of voters to choose their preferred option. Failing to fix the issue, the JCE suspended the elections at 11:11am Sunday morning, and later postponed them until March 15th.

The initial official reactions of most parties were to accuse each other of a failed attempt at electoral fraud, with or without the aid of officials from within the JCE. Civil society has responded by organizing protests against the JCE and the government since the day of the elections.

The protests have spread to several prominent cities in the country. The main one in Santo Domingo has congregated thousands of people in the Plaza de la Bandera, a national monument located directly in front of the headquarters of the JCE. The protesters demand the resignation of the JCE’s board of directors, an independent investigation into the events of February 16th led by the OAS or the IFES, and the continued participation of these organizations as observers in both the municipal elections in March and the general elections in May.

A Schism Along Technology Lines

The February 16th elections were to be the first ones in which an automated voting system was implemented. This system has been the cause of great debate and political tension in the country since the governing Partido de la Liberación Dominicana (PLD) held primary elections back in October 2019.

During the primaries, the former president, Leonel Fernandez, abandoned the PLD after losing the presidential candidacy against the businessman Gonzalo Castillo, who was supported by the current president Danilo Medina. Fernandez accused the PLD of orchestrating fraud by manipulating the automated voting system and decided to run for the presidency with a new party under his leadership, the Fuerza del Pueblo.

The failure of February 16th does not prove Fernandez’s accusations nor the inherent vulnerability of the automated voting system relative to others. It may, however, vindicate and legitimate the allegations of fraud in the public opinion, benefitting Fernandez’s candidacy and damaging the PLD.

Should the JCE Resign?

One of the main questions since Sunday has been whether the board of directors of the JCE should resign. The public confidence in the institution has been clearly damaged, and as such, it cannot represent an impartial authority over the electoral process. Yet, by law, the new elections must be carried out within the next 30 days. Starting this process from scratch with both new leadership and a new technical body puts at risk the quality of the electoral process.

While the board denied any intention of resigning, it asked both the OAS and the IFES to remain in the country as observers until the next elections. The executive also asked the OAS to carry out an independent investigation on the events of February 16th.

The JCE has cooperated closely with the different parties. It has held several meetings including all parties to navigate the crisis. In a leaked video of one of such meetings, it is clear that the parties have the ability and willingness to work with the leadership of the JCE, even if their official statements suggest otherwise.

Furthermore, the JCE conceded a public live audience, as demanded by the parties, with the delegates of all the political parties, who took turns to present publicly the failures of the JCE and their demands for the following elections.

Yet, these measures do not amount to much. The OAS and the IFES were both already present before the municipal elections and it is not clear what their extended role would be. The JCE still has greater access and knowledge to the more intricate details of the election process, which is troublesome if one does not trust the JCE in the first place.

Even if the JCE presents its resignation, it’s not clear who its replacement would be. Members of JCE must be approved by two-thirds of the Dominican Senate. Virtually all members of the Senate belong to the PLD. If one believes that the current JCE is dependent on the PLD and the government, then there is no reason to believe that its successor would be any different.

The protests should continue, of course, but their target should be greater transparency and guarantees of a fair process, as well as the involvement of civil society, not solely the resignation of the JCE. The JCE, in turn, will need great creativity in order to actually convince the public of such fairness in the March elections.

Despite public statements, the ongoing dialogue between the JCE and political parties demonstrates the ability of the main political actors to cooperate with public institutions. Additionally, while criticizing the failure of the JCE, all main candidates have reaffirmed the ideals of democracy, peace and the rule of law.