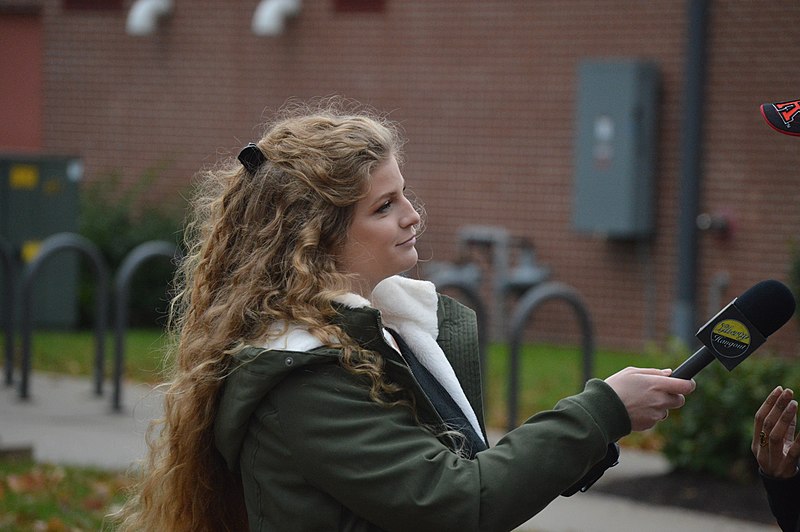 Kaitlin Bennett, America’s conservative media star, does not shy away from making headlines. Acting as a sort of “stunt activist” on university campuses, she is a proponent of many traditionally conservative talking points.

Her political activism dates back several years, as she initially rose to fame following viral photos of her graduation in 2018 from Kent State University in Ohio, where she was pictured carrying an AR-10 rifle with the words “come and take it” written on her graduation cap.

Since then, Bennett has appeared on university campuses to debate with students on current political events in America, and has been active in the U.S. online political sphere, branding herself as a “gun-rights activist.”

Bennett’s YouTube channel, Liberty Hangout, has gained her significant recognition for her political work. In approaching issues from what Bennett describes as a “libertarian” perspective, she has amassed over 420,000 subscribers. Her content mainly features her interactions and debates with mostly left-wing university students.

Indeed, Bennett’s work can be said to be reminiscent of Steven Crowder’s popular YouTube segment ‘Change My Mind,’ where he debates left-wing students from a conservative perspective. Unlike Crowder, however, much of Bennett’s technique in engaging university students leans more on the side of intimidation, rather than conversation.

This large volume of support does not come without its critics, however. Bennett has been subject to bullying both online and in-person, with prominent YouTuber James Charles writing on Twitter that Bennett “deserves” to get bullied. Her criticism is also apparent on her own Youtube channel, with the comment section on some of her videos being disabled.

In contrast to other conservative activists like Ben Shapiro or Charlie Kirk, who are generally liked among fellow conservatives but disliked among liberals, Bennett has received criticism from across the political spectrum.

The supposed difference between conservative and liberal critics is that they seemingly do not want to silence her views, even though they might disagree with them. Bennett’s activism can be said to be a reaction to what she believes are university students’ inability to accept conservative viewpoints, belligerently angering students with her on-campus debate and student questioning sessions.

In many of these interactions, her questioning style is indeed provocative and meant to demean the opinions of left-wing students. On top of this, her debating-style observably does not seem to prove her point regarding the left’s lack of intelligence, as she does not really provide proper rebuttals to the issues she is supposedly so passionate about. This fact could perhaps explain her lack of appeal to liberals and conservatives alike.

Recently, Bennett was forced to leave Ohio University after her appearance sparked a massive protest, resulting in students essentially chasing her off campus grounds. Bennett called the event a “riot,” although no violence occurred, fueling the perception of the “intolerant left” held by many conservatives.

Bennett is just one example of a conservative being forced to leave or cancel an event on a college campus for spreading their political opinions. Similar instances have occurred with Ben Shapiro, Milo Yiannopoulous, and Ann Coulter. By pushing-out or revoking conservative platforms, however, the left fails to realize how this only supports their apparent dogmatism in the eyes of conservatives.

There is evidently a lack of civil discourse between conservative and liberal students on campuses in America. Figures like Bennett, who make statements simply to provoke, do a genuine disservice in supporting an exchange of ideas from opposing parties to take place.

Bennett’s interactions observably point to the several issues that the left and right must improve upon. On a surface level, it appears as if left-wing students are willing to boot-out any speaker who doesn’t align with their views, with some right-wing figures failing to bid a good case for their presence by being outrightly insulting.

In an attempt to prove the absence of an open-mind among liberals regarding conservative beliefs, Bennett is herself intolerant to several issues. For example, she has previously stated in a video titled “College Students Have No Morals” that, while transgender bathrooms do not bother her, she “just think[s] it’s gross.”

Contrastingly, left-leaning students should not give fuel to fire by attempting to suppress conservative voices who they deem as hateful. A wiser tactic would be to ignore professional provocateurs instead of help prove their point, especially seeing that Bennett’s views are already widely disregarded by most left-wing students.

In higher-education institutions today, research supports the notion that professors are more left-leaning. Many conservatives cite this as evidence of a so-called “leftist indoctrination” which occurs on university campuses, even though there is little evidence to support the claim that there is inherently a liberal perspective being taught to students.

In watching Bennett’s political interactions, she ultimately shows us how a lack of civil discussion in the current left-right dynamic is tiring.

If students on campus are genuinely interested in debating what they are passionate about, then both left and right-wing students should do so without including provocative statements or attempting to suppress the voices of the opposing side.