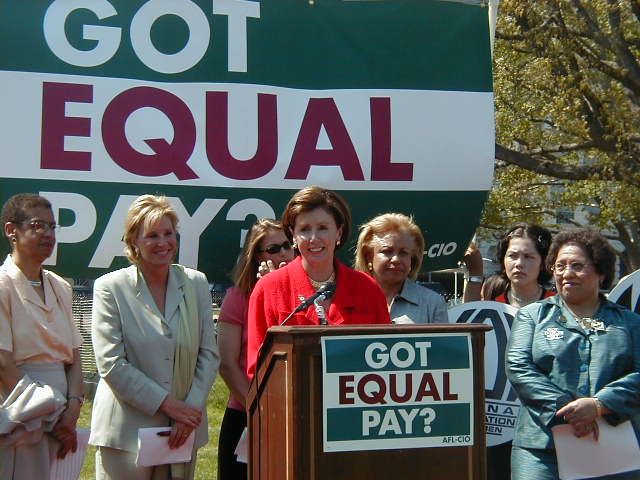 National Equal Pay Day marks how far into the next year the average woman must work in the U.S. in order to earn what the average man earned by December 31st in the previous year. According to 2019 U.S Census data, women earn $0.82 (cents) to every dollar that a man makes, meaning that, in order to match the amount  festivities will have to wait until March 31st. It should be noted, however, that equal pay figures vary widely by ethnicity; for Asian-American Women, their equal pay-day is February 11 ($0.90 cents), Black Women by Augugst 13 ($0.62 cents), Native American Women by October 1  ($0.57 cents) and Latina Women by October 29 ($0.54 cents).

However, the conversation surrounding inequality between men and women when it comes to the workplace should not just be about the cents to dollar ratios. The conversation should be focused on the root of the issue: at all the ways in which women are dissuaded and excluded from participating in the public sphere while their male counterparts are not. Morever, we should focus on the reality of gendered steroetypes and other kinds of discrimination women face when they finally do get the chance to join the public sphere.

In Susan Boyd’s “Can Law Challenge The Public/Private Divide? Women, Work, And Family”, Boyd, a Canadian feminist legal scholar, examines the way in which society is structured around an ideological divide between the public and private spheres. Here, the public-private divide can be defined as an “ideological division” that denotes “opposing spheres of public and private activities.” [1] While masculinity is structured around public sphere indicators of economic and material success, femininity is constructed in terms of private sphere indicators of childcare and domestic labour. Such gendered behaviours and attitudes are ingrained into our society and ultimately encourage men to pursue positions of power while women are indirectly discouraged away from them. This understanding helps better explain the disproportionate representation of men and women in Canada’s parliament and provincial legislatures, despite genders quotas, such as the NDP’s voluntary party quota (50 per cent) and the Liberals’ voluntary party quota (25 per cent), being are put in place.

The influence of gendered behaviours and attitudes on the public and private divide is certainly visible in how women are represented (and underrepresented) in the media, particularly in politics.

The unequal media coverage of female politicians in the news is a key hurdle to equal participation in politics. The voices of female leaders tend to be disregarded while male-led conversation dominates media coverage and, therefore, global attention, as evidenced by the disparity in media mentions between the female and male presidential candidates in 2019. Media attention is a significant driver of attitudes and participation for women in politics, and such low representation can be detrimental to young girls and women who need female role models to look up to in order to encourage political participation. It shouldn’t be a surprise that lower levels of exposure are resulting in lower perceived political competence which then further contribute to higher levels of withdrawal from political careers by females.

While having female role models in the media will encourage girls not to opt-out of politics, the importance of not only quantity, but quality in media coverage, needs to be stressed. Media coverage that perpetuates existing female stereotypes can be just as harmful, if not more harmful, than a lack of media coverage. Too often, when women are represented in the media, the attention is focused on their physical appearance or personal relationships. One need only look at the reddit thread comments about the former female candidates for the upcoming US Presidential election to see how this emphasis plays out. For example, one reddit user commented “Warren and Clinton…I don’t particularly want to grab a beer with them, but I’d love to audit a class they were teaching.” The stereotyping, sexualisation and overall gendered discrimination of female politicians teaches girls that success is only attainable for those who match society’s narrow definition of ideal femininity. This ultimately perpetuates and reinforces the idea that women just aren’t cut out for the public sphere.

Women are, however, expected to take the lead in the private sphere. This leaves women to perform unregulated, unpaid home-based labor that requires women to fight for welfare benefits in compensation. This issue is intensified by the COVID-19 pandemic in which “school closures and household isolation are moving the work of caring for children from the paid economy – nurseries, schools, babysitters — to the unpaid one,” as pointed out by the Canadian Women’s Foundation. Additionally, even if women work full time in the public sphere; mothers who at the same time raise children, wives who cater for husbands, and daughters who care for their parents are all burdened with the double role of having to fulfill and balance work between the public and private divide. Finding this kind of balance is hard to do, and conceivably puts many women off of pursuing a career.

Ultimately, as Boyd notes in her study, gendered divisions in the public and private spheres as a result of these discriminations can be seen to exist “not so much in opposition to one another, but rather in connection with one another.” [2] Women’s domestic labour in the private sphere supports the ability of men to participate in the public sphere and benefit economically and politically; this further allows men to establish dominance in society. Because the public sphere is affected by familial ideology and by privatization, and the private sphere is necessarily implicated by public relations and law, equality, and equal pay for that matter, can’t be achieved unless equality exists in both spheres.

Though addressing the private sphere might be more complex, the use of feminist strategies to resist discriminatory and stereotypical social organization are a step in the right direction.