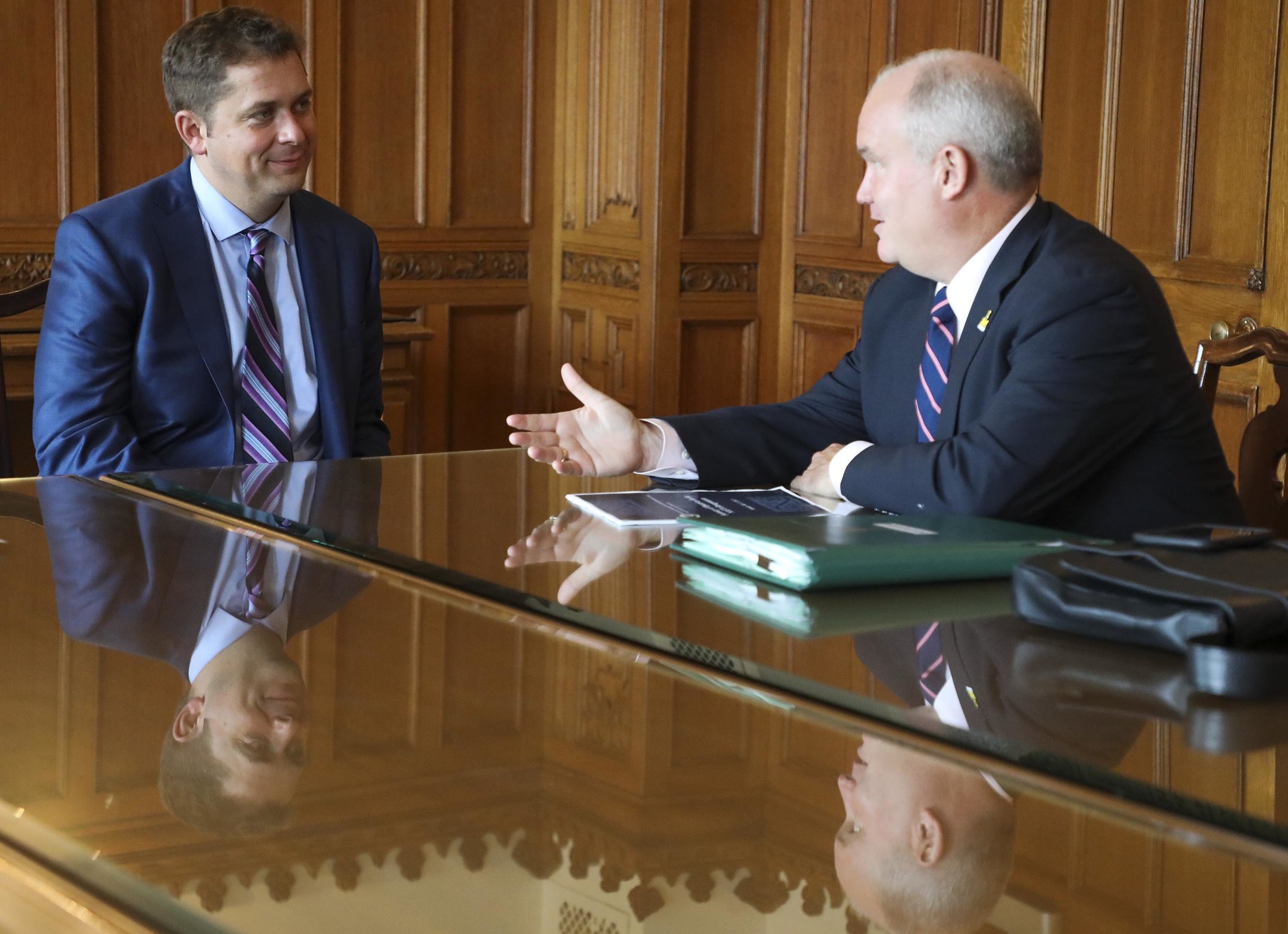 On August 24, 2020, Erin O’Toole was officially named the new leader of the Conservative Party of Canada. While many commentators have noted his relatively strong performance in the House of Commons since taking office as the Leader of the Opposition, O’Toole faces substantial voter and media pressure to differentiate himself from his predecessors.

The Conservative Party of Canada was formed in 2003, the product of a merger between the Progressive Conservative Party led by Peter MacKay and the Canadian Alliance led by Stephen Harper. The new party was formed in an attempt to solve the problem of right-wing vote splitting, and succeeded in 2006 when Stephen Harper was elected Prime Minister. Harper governed from 2006 to 2015, and his leadership style was characterized by some as an increasing centralization of powers in the Prime Minister’s Office, and a generally centre-right approach to governance. Key Harper-era policies included substantial tax reductions, tough-on-crime changes to the legal system, and strong support for Israel.

Harper, despite holding socially conservative stances personally, managed not to alienate the urban and suburban ‘swing voters’ by governing from the centre on social issues. He officially apologized for the government’s implementation of residential schools, recognized Quebec as a “nation within a united Canada,” and did not actively propose policies that would restrict same-sex marriage or abortion access (despite allowing free votes on social issues from backbencher MPs). This compromise enabled the Conservatives to use their limited political capital on popular, pocketbook economic issues rather than divisive social questions.

The question of “what now?” has loomed over the Conservatives since the 2015 Federal election, when Harper, who had arguably defined the modern Canadian conservative movement, was defeated by Justin Trudeau’s Liberal party.

Canada’s various conservative parties may have always been at a fundamental disadvantage against the Liberals, who have been so successful that they are sometimes called “Canada’s natural governing party.” The Liberals are a big-tent party, with a base of supporters ranging from wealthy downtown progressives to rural voters from the Maritimes. By contrast, the Conservatives rely on a coalition of a consistently socially conservative and wealthy base, plus a variety of middle class and rural voters to fill in the gaps. While Harper managed to bridge the divide and pick up a sufficiently broad coalition, a repeat has since eluded the Conservatives.

The insurgent candidacy of now-People’s Party leader Maxime Bernier in the 2017 leadership election threatened to demolish the big-tent project entirely. Bernier, a prominent Québec Conservative MP with a history of voting independently from the Conservative caucus, and a libertarian-populist ideology, narrowly lost to Andrew Scheer in the 13th round of the leadership election. Had he prevailed, the Conservatives would likely have become further right-wing.

Scheer, who was leader during the 2019 election, claimed to share many similarities with Harper. However, he only managed to hold the Liberals to a minority government, winning 121 seats in the 2019 election. Many Conservatives considered his failure to defeat what may have been seen as a weakened Liberal party in 2019 as an indication that Harper-era Conservatism was dead.

Going forward, the Conservatives will need to consider their options carefully. They can either maintain the status quo (which involves at least some nostalgia for the Harper era), shift rightward to rally an energized base of “True Blue” Conservatives, or veer towards the Red Toryism displayed by defeated 2020 leadership candidate Peter MacKay.

Maintaining the status quo and reminding voters of the Conservatives’ past successes under Harper may carry the least risk, especially if voters naturally tire of Trudeau’s Liberal government. It could be that status quo Conservatism can be somewhat divorced from its creator; some commentators have argued that Harper’s legacy is already dissolved. Despite this, a strategy of trying to ignore Harper rather than owning and defending his record could backfire. Many prominent Conservative MPs have hard-to-ignore links to Harper. Erin O’Toole was the Minister of Veterans’ Affairs during the final year of his 2011-2015 majority. The Liberals may succeed in digging up past scandals to remind voters of the more unsavoury aspects of Harper’s government, whether or not Erin O’Toole promotes nostalgia for the Harper years.

Energizing a “True Blue” base is another approach that would excite many Conservative voters, but faces the problem of a cap on support. Many voters may be too afraid of social conservatism, and the party relies on a base of right-wing immigrant voters in the Vancouver and Toronto suburbs in order to win elections. Giving more prominence to white, right-wing Christians within the party could risk alienating one of the most important parts of the Conservatives’ path to win the next election.

Finally, there is the option for the party to make a Red Tory pivot. While Erin O’Toole (historically a relative moderate) pivoted to a “True Blue” stance in the leadership race against MacKay, it is relatively common for leaders to change stances between leadership races and general elections, given potentially different voter priorities. O’Toole may be seen as more likeable than Harper or Scheer, and might be able to pull off a shift in messaging. This could carry the benefit of winning over voters who are frustrated with the Liberals’ repeated ethical failings. However, the weakened People’s Party of Canada is not yet dead, with Maxime Bernier currently standing in a by-election in York Centre. Alienating the right-wing base could risk depressing turnout or creating People’s Party voters in the Conservatives’ Prairie and rural strongholds.

Stephen Harper’s legacy will continue to play a part in Canadian conservative politics for the foreseeable future; it is now up to the party to decide to what extent. Their future in power depends on choosing correctly.