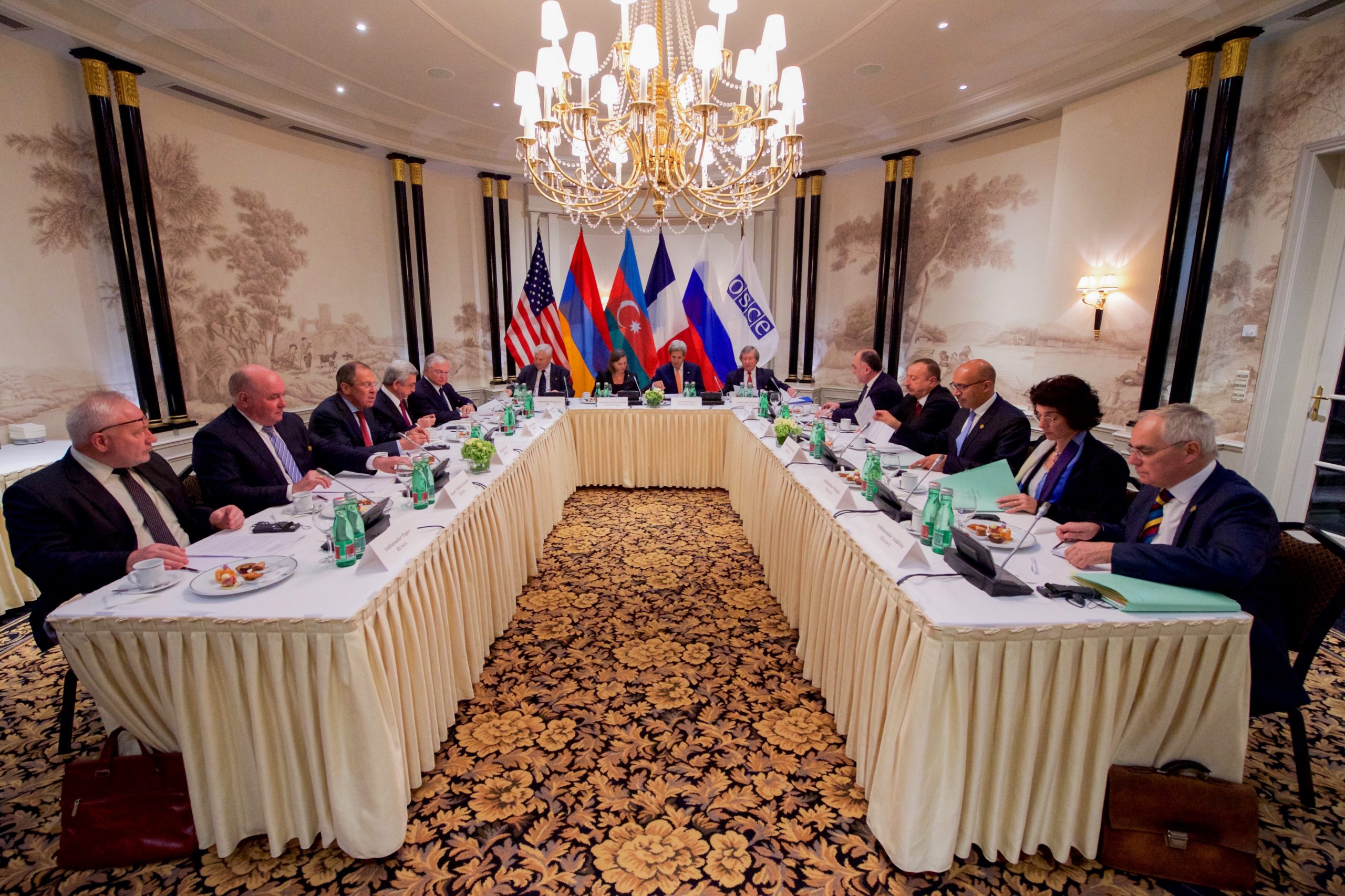 The revitalization of the historic conflict over Nagorno-Karabakh – an ethnically Armenian region controlled by Azerbaijan – erupted on September 27th as both nations began mobilizing its military forces. Relentless artillery strikes have devastated the region, as the destruction of military facilities quickly transpired into direct targeting of civilian infrastructure.

As the international community continues to appeal for an immediate ceasefire, neither Armenia nor Azerbaijan seem willing to give up the fight. Armenian Prime Minister Nikol Pahinyan declared martial law and total mobilization to maintain indirect control over the region. Azerbaijani President Ilham Aliyev said in a televised address that Azerbaijan would defend its internationally recognized land and claimed that Armenia must “unconditionally, fully, and immediately leave” Nagorno-Karabakh.

Map of the Nagorno-Karabakh Conflict Between Armenia and Azerbaijan. Licensed under CC BY-SA 4.0

Despite agreeing to a ceasefire for the third time since the eruption of violence, both Armenia and Azerbaijan have failed to uphold these commitments as destructive artillery shells and rockets continue to be fired in the contested region. The two nations are accusing each other of violating the newly agreed humanitarian truce brokered by Washington this Monday. However, reports have claimed that Armenia violated the truce after it shelled the village of Terter.

The new humanitarian ceasefire was announced following talks between US Deputy Secretary of State Stephen Biegun, Armenian Foreign Minister Zohrab Mnatsakanyan, and his Azerbaijani counterpart Jeyhun Bayramov. Despite these negotiations, reports claim that it was violated within minutes of being agreed upon. Therefore, the effectiveness of these negotiations is in question as the humanitarian truce brokered by Russia just last week was also violated within hours of being issued.

The United Nations has called for an urgent ceasefire as the Secretary-General Antonio Guterres condemned both Armenia and Azerbaijan for its war crimes – that of repeatedly and intentionally targeting civilian infrastructure. He further called for a de-escalation of tensions “without delay” as firing continues to devastate the region.

Since fighting erupted, the defense ministry of the Nagorno-Karabakh region issued a statement denouncing Azerbaijani attacks as the military death toll reaches 963, including substantial civilian casualties. Azerbaijan has yet to release its number of military casualties but claims that more than 50 civilians have been killed by Armenian strikes. Despite these numbers, Russia believes the bloodshed has cost more than 5,000 lives, accentuating the demand for effective negotiations.

Modern-day Armenia and Azerbaijan became part of the Soviet Union in the 1920s. Despite its ethnically Armenian majority, the Soviets granted Azerbaijan control over the Nagorno-Karabakh region. Consequently, ethnic conflicts emerged as tensions over who should govern the Caucasus area overwhelmed the region.

In the 1990s, the Nagorno-Karabakh legislature passed a resolution to join Armenia despite being within Azerbaijani borders. The initiative was launched by separatist ethnic Armenians and backed by the Armenian government in an attempt to become part of Armenia. The resolution erupted into a full-scale war in 1991, leaving roughly 30,000 casualties and over 1 million refugees. Armenian forces gained control over the region before Russia brokered a ceasefire in 1994. After the deal, Nagorno-Karabakh remained part of Azerbaijan despite being governed by a separatist self-declared republic.

Negotiations and peace talks have been led by the Organization for Security and Cooperation in Europe (OSCE) Minsk Group since 1994. Co-chaired by France, Russia, and the United States, they coordinated efforts to find a peaceful solution to the Nagorno-Karabakh dispute.

However, despite the 1994 ceasefire, tensions have remained high as skirmishes and artillery shelling continue to plague the region. Fighting last broke out in April of 2016, resulting in more than 300 casualties. Multiple ceasefires have been brokered since, however, there are no signs of peace.

Today, the local conflict threatens to transpire into a regional conflict as Turkey is offering direct support to Azerbaijan. Turkish President Tayyip Erdogan vowed to continue the struggle to “liberate its territories” and pledged to support Azerbaijan “in any way possible”. These commitments heighten the possibilities of a regional war, as Russia has a defense pact with Armenia.

France and Russia were the first countries from the Minsk Group to have spoken out since the commencement of missile attacks in late September. Although both ceasefires brokered by Moscow on October 10th and October 17th failed, Russia is still trying to diplomatically hold talks and negotiations. Russian Foreign Minister Sergey Lavrov released a statement that Moscow has ruled out any military intervention, as “a peaceful settlement is not only possible, it remains the only way”.

France pledged for the two nations to end hostilities and begin “credible negotiations” with due regard for international law. President Emmanuelle Macron has also called Turkey’s promises of assisting Azerbaijan as “dangerous and reckless”.

Despite being an active member of the Minsk Group, President Donald Trump was the last to condemn the war and assist diplomatic negotiations. Democratic presidential nominee Joe Biden called out the President within days of the outbreak, insisting that the United States help broker a ceasefire between Armenia and Azerbaijan. It was only until recently that the United States began to hold talks.

Taking all elements into consideration, hostility between Azerbaijan and Armenia heightens as diplomatic efforts have failed to broker a peaceful solution. The violation of three ceasefires and Turkey’s involvement is threatening to extend the conflict. Mobilization of the international community, including the United Nations and the Minsk Group, is imperative for the de-escalation of tensions in the Nagorno-Karabakh region. Although the Secretary-General of the United Nations has spoken out, mobilization of states is required to put an end to the bloody conflict and hold both Azerbaijan and Armenia accountable for its war crimes.

Featured image by the US Department of State obtained via Flickr under a CC BY-NC-ND 2.0 license.