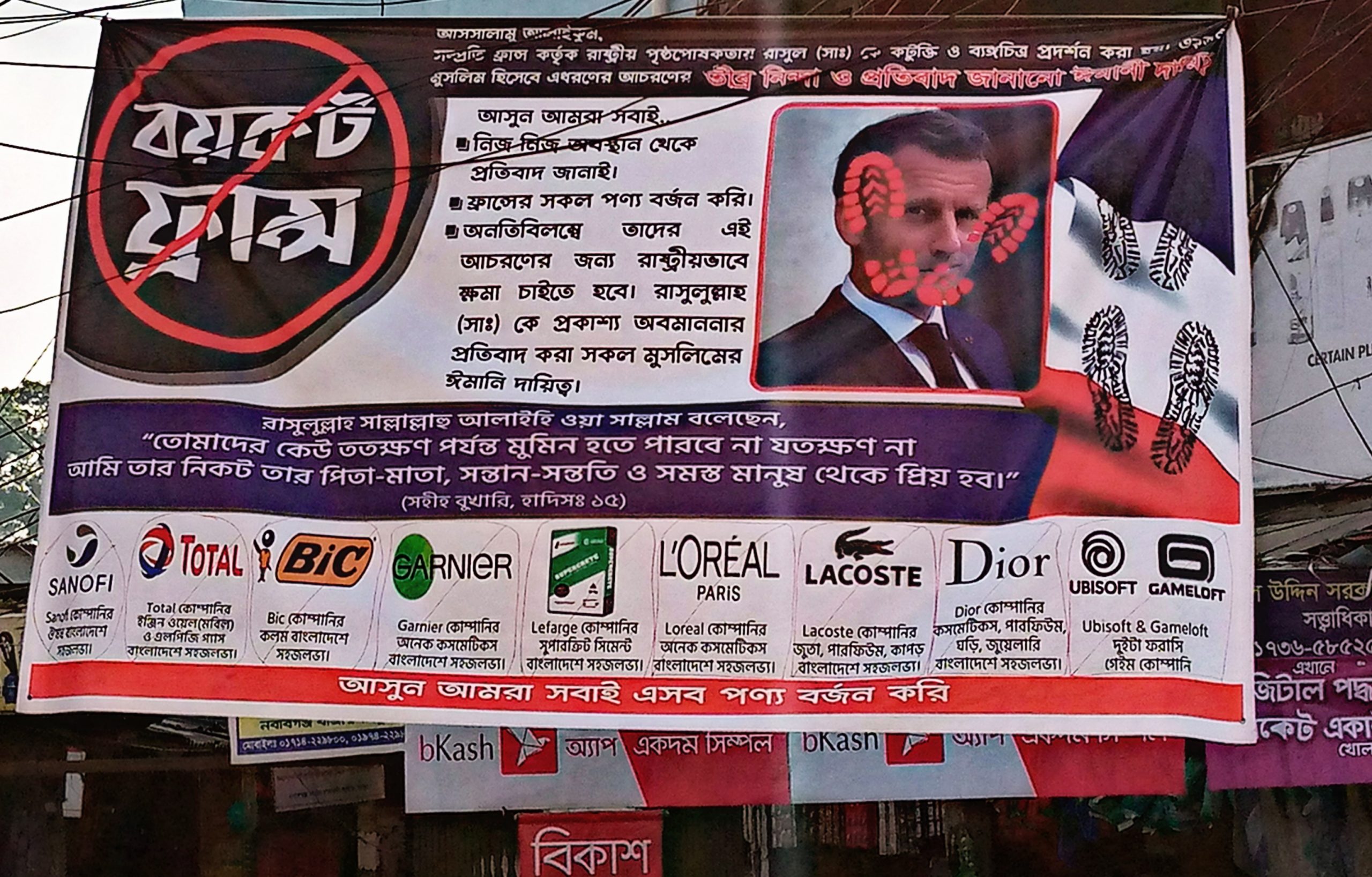 Recent tensions between French President Emmanuel Macron and the Muslim world emerged in response to the President’s allegedly divisive rhetoric during a speech in early October where he outlined a proposal to combat “Islamist Separatism”. This term was used by the President to denounce what he believes is the dissociation of the Muslim population from France’s Republic values. During his speech, the president said that Islam was “in crisis”, spurring significant backlash across the Muslim world. Later that month, tensions worsened after the President defended the publishing of a Charlie Hebdo caricature of the Prophet Mohammed – an image deeply insulting to Muslims.

In response, religious leaders are calling on governments to boycott French products and dismiss French diplomats residing in their capitals. As Muslims take the streets, images have surfaced showcasing protestors burning the French flag and waving pictures of the President morphed as the devil.

In Bangladesh, the mobilization of religious groups has reached unprecedented heights as the Islamist group Hefaza-e-Islam has given the country a 24-hour ultimatum to cut all diplomatic ties with France. The group’s leader, Junaid Babunagari, vowed that if demands were not met they would march to the French embassy and “destroy it”. The Islamic fundamentalist group further demanded that anyone guilty of insulting the Prophet should face capital punishment. Despite impending domestic pressures, the Bangladeshi government has yet to respond.

Several Arab countries have followed a path of activism as the hashtag #BoycottFrenchProducts has begun trending across social media platforms throughout the Muslim world. French goods have been taken down from supermarket shelves as religious groups continue to condemn the president’s recent comments towards Islam. In Qatar, the Wajbah Dairy company announced a boycott and promised to provide alternatives to French dairy products.

Recently, organizations such as the Gulf Cooperation Council (GCC) and the Organization of Islamic Cooperation (OIC) described Macron’s comments as “irresponsible” and fuelling hatred among people. In the United States, the Council on American-Islamic Relations has urged American Muslims to avoid traveling to France until the government stops “fanning the flames of islamophobia”.

What Exactly did the President say?

On the 2nd of October, President Emmanuel Macron announced a new law against religious separatism aimed at combating radical Islam in France. The President proposed an extension to the 1905 secularist law which would allow increased government-sanctioned surveillance. The bill would permit the state to monitor international funding of French mosques and limit the number of students home-schooled in an attempt to prevent radicalization. Muslims in France called on the government to stop stigmatizing Muslims as many perceived the President’s comments as a unilateral assault on Muslims and capable of increasing islamophobia.

Following the President’s speech, Turkish President Tayyip Erdogan launched an attack on Macron’s “impertinence” and called for the French leader to undergo mental checks. Following these comments, hostility between the NATO allies reached remarkable heights as the two nations exchanged insults while simultaneously remaining in conflict over the war in Nagorno-Karabakh. France has recalled its envoy to Turkey for consultation after the Elysee deemed Erdogan’s speech as “unacceptable”.

Macron continued to receive widespread criticism across the Muslim world after defending France’s rights to freedom of speech. The outcry emerged after a caricature of the Prophet Mohammed was published by Charlie Hebdo – a notorious satirical French magazine – in September. The President reaffirmed that it is his duty to protect French freedom and rights. According to Islam, any depiction of the Prophet is forbidden, and the caricatures published by the newspaper are seen as extremely offensive to the faith. The magazine was in fact victim of a terrorist attack in September 2015, after Islamist gunmen killed 12 people.

Emmanuel Macron reiterated his statement of upholding values of speech and expression after Samuel Paty, a school teacher, was decapitated in a Paris suburb after showing his students the Charlie Hebdo caricatures during a class about freedom of speech. The same month, France suffered its second terrorist attack after an individual knifed three churchgoers in the city of Nice.

Following these attacks, the President committed defending the caricatures published by Charlie Hebdo as he expressed that France is a country with “freedom to speak, to write, to think, and to draw”. In a televised interview with Al Jazeera, Emmanuel Macron claimed that his words had been distorted into lies and denied attacking Islam. The President said he understood that Muslims may be shocked, but that it does not justify any form of violence. When questioned about his extension of the secularist laws, Macron claimed that it was a bill to combat the violence of extremist groups fighting in the name of Islam, designed to protect “all French people”.

Emmanuel Macron’s emphatic defense has caused ripples across the Muslim world as protestors continue to mobilize throughout the world as part of an effort to reinstate their religious dignity in the face of perceived French oppression. As the President attempts to revitalize positive relations, the question remains whether countries will listen to the cries of its people and impose sanctions on France.

Featured image by Ahm Masum and obtained via Wikimedia Commons under a CC BY-SA 2.0 license.