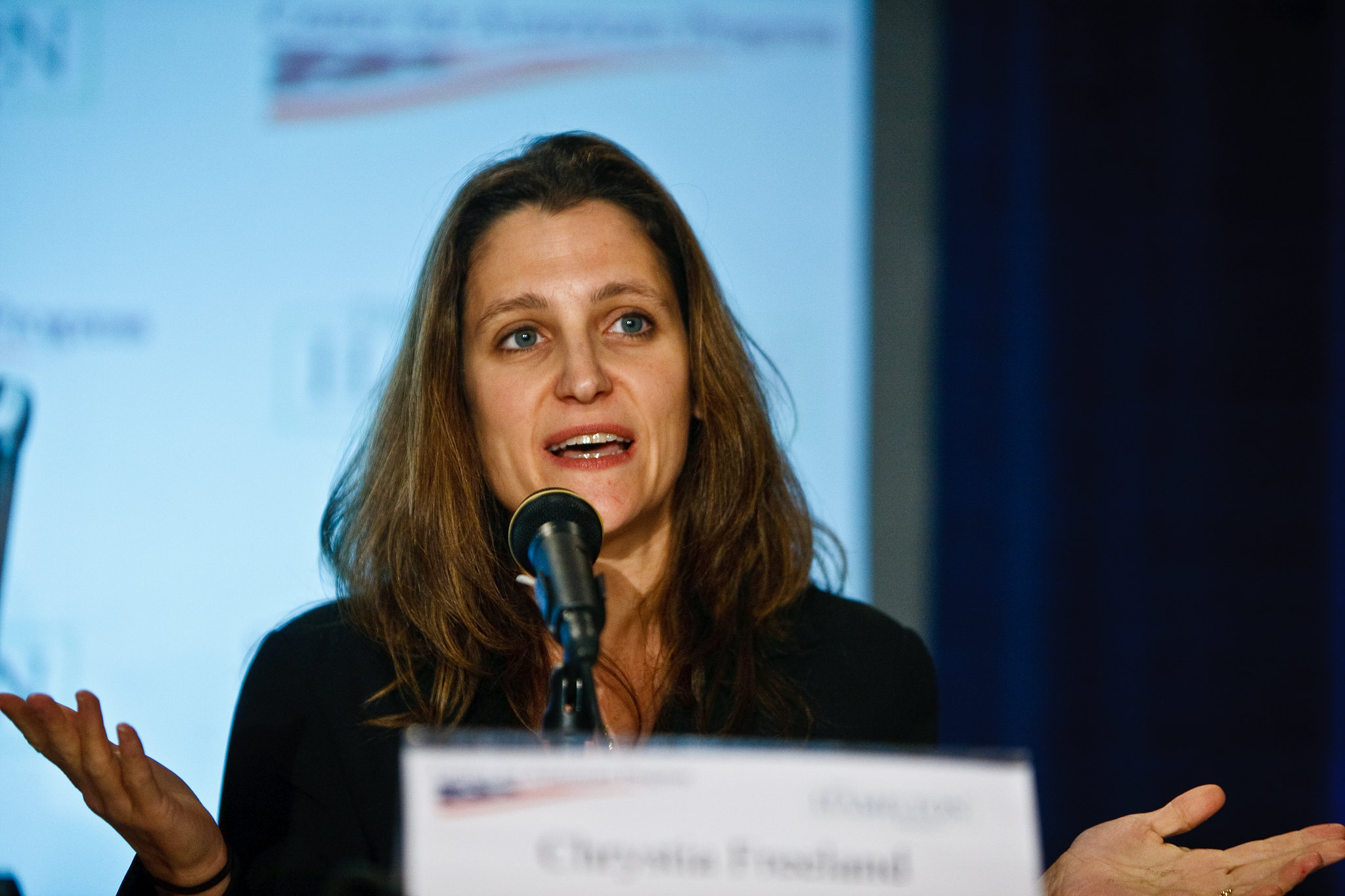 Despite only being a Member of Parliament since 2013, Chrystia Freeland has already served as the Minister of Intergovernmental Affairs, Foreign Affairs, International Trade, and Finance, in addition to Deputy Prime Minister. This game of ministerial musical chairs has led many observers to wonder why Freeland is not Prime Minister herself, and Freeland has been famously called Canada’s “Minister of Everything” by both domestic and international media. There has also been intense speculation over Freeland’s potential as a successor to Trudeau, raising big questions about her role in the Liberal government. Is Freeland’s prominence a result of her ability to clean up the Liberals’ scandals, or an attempt by Trudeau to push risky portfolios on a political rival?

Before entering politics, Freeland worked as an editor at The Globe and Mail and the Financial Times, and served as the Managing Editor at Thomson Reuters. After the resignation of MP Bob Rae, Freeland won the 2013 by-election for the Toronto Centre riding. Since the 2015 Federal election, she has served as MP for University-Rosedale, a Liberal stronghold in downtown Toronto. She was immediately named Minister of International Trade, and worked to negotiate the Comprehensive Economic and Trade agreement (CETA) with the European Union.

In January 2017, Freeland was promoted to Minister of Foreign Affairs, replacing Stéphane Dion. One of her largest tasks in this portfolio was to lead the renegotiation of NAFTA (now USMCA), the free trade agreement between the United States, Canada, and Mexico. After the 2019 federal election, Freeland was named Deputy Prime Minister and Minister of Intergovernmental Affairs. The move was seen by many as a ploy to deal with the problem of Western alienation and a resurgent Bloc Québecois; in 2019, the Liberals were completely pushed out of the Prairie provinces and the Bloc won 32 seats. Despite the change of title, Freeland remained in charge of Canada-US relations.

On August 17, 2020, Minister of Finance Bill Morneau resigned from Parliament amid the WE Charity ethics scandal. Justin Trudeau shuffled his cabinet again, with former president of the Privy Council Dominic LeBlanc becoming Minister of Intergovernmental Affairs, and Freeland becoming Minister of Finance. This made Freeland Canada’s first female finance minister, and she remained Deputy Prime Minister. Freeland’s new role may be relevant to her future in the party, as several Canadian finance ministers have gone on to serve as Prime Minister.

The context of Freeland’s rise to substantial power raises multiple questions about her future. There are two broad sets of explanations for Trudeau’s decision to grant Freeland, a potential political rival, multiple prominent roles in his government. The first is that Trudeau sees Freeland as a talented, intelligent politician, and that any risk of her usurping Trudeau in the future is comparatively unimportant relative to her present usefulness. The second is that Trudeau is deliberately keeping his enemies close, in a move reminiscent of Jean Chrétien’s decision to appoint future Liberal leader and Prime Minister Paul Martin as finance minister.

It may be that genuine respect for Freeland is the primary motivator for her influence in the Liberal government. There are no public reports of conflict between Freeland and Trudeau, and Freeland has defended Trudeau through multiple ethics scandals. She has earned praise from all sides of the political spectrum, particularly for her handling of the United States’ imposition of tariffs on Canadian steel and aluminum. As a highly educated Rhodes Scholar, Freeland conveys a message of competence and expertise that the Liberals have frequently stressed in political messaging.

More cynically, some commentators suspect that Trudeau has dumped his largest problems (dealing with the Trump administration, regional alienation, post-COVID economic recovery) on Freeland, hoping that his strongest leadership opponent will be left with political baggage or overwhelmed by her portfolio. While this may be plausible, there are some reasons to doubt this explanation. Trudeau needs Freeland to succeed as Finance Minister; the Liberals have pitched a bold and expensive plan for rebuilding the economy, and a failure by Freeland could be the scandal that breaks the camel’s back. Setting Freeland up to fail would be a high-risk strategy, given that she is a star MP who has been re-elected and promoted multiple times.

Should Freeland succeed in bringing Canada out of the COVID-induced economic crisis, her CV may look awfully Prime Ministerial.

Featured image by the Center for American Progress and obtained via Flickr under a CC BY-ND 2.0 license.