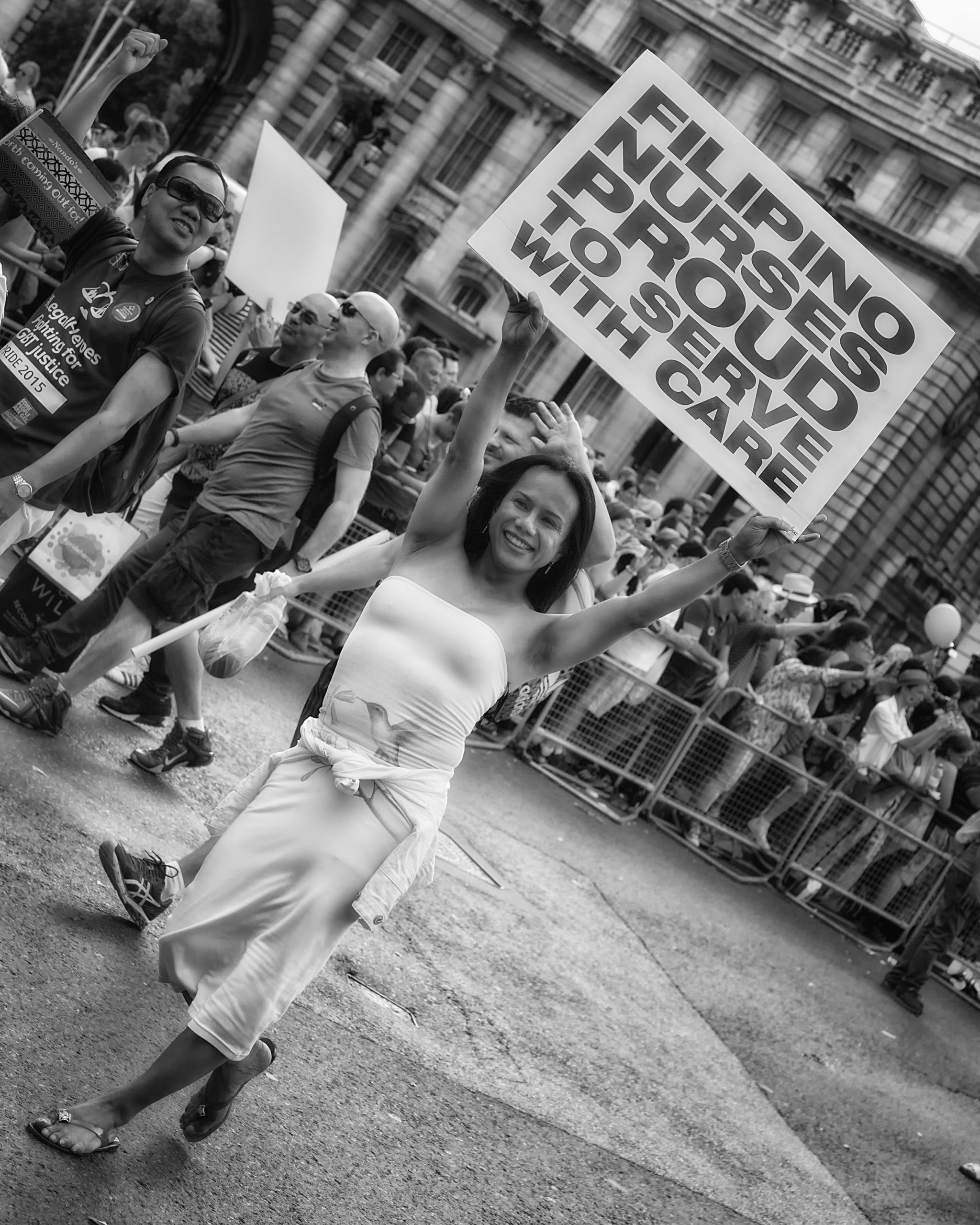 As December rolls in, celebrations are in order. Despite the immense hardships of 2020, the holidays provide time to reflect on our year and, if lucky, maybe see some friends and family. This is all the more true for Filipinos, as December marks the return home of the bagong bayani, the new heroes. December is the national month of overseas Filipino workers (OFWs) since it is often the one time a year the workers are reunited with their sons, daughters, husbands, parents. However, with the COVID-19 pandemic, an important category of ‘heroes’ will not return home for the first time. Most of them will be kept in the US or in Gulf countries, providing life-saving care. As the world’s largest exporter of nurses, Filipinos in the healthcare industry around the globe are anticipating a brutal holiday season. This specific expertise has been developed after years of American colonialism and by the Philippine government’s aggressive push for citizens to enter the international labor market, reflecting the relationship that both countries fostered to ensure a constant flow of workers or cash.

The story of how the Philippines became the most significant player in the immigrant healthcare industry begins in 1898 when the U.S. colonized the country. As Professor of Ethnic Studies at UC Berkeley Catherine Ceniza Choy explains, the U.S. legitimized the colonization by emphasizing the humanitarian aspect of their Benevolent Assimilation policy. They did not want to be associated with the harsher practices of European colonies that had been condemned by then. The authorities then constructed schools, infrastructure, and a public health system, building no less than ten nursing schools in less than a decade. Nurses were taught in English only and abandoned traditional medicine in favor of American practices.

Since the 1950s, Filipino nurses have been filling up vacancies in American hospitals. In the 1950s, the problems began as the government stopped funding World War II-era hospitals and nursing schools. The vacancy problem only worsened with the decades. In the 1960s, the creation of the Medicare and Medicaid programs and the women’s rights movement, which opened American women’s access to a broader range of occupations, meant that the need for public healthcare was growing with less and less American women willing to enter the system. By then, one out of four jobs were vacant. In 1965, the Hart-Celler Act, also known as the Immigration and Nationality Act, came as a solution. It provided easier pathways to migration to the U.S. American labor recruiters from hospitals and travel agencies especially targeted Filipino nurses to apply for visas to work in the U.S. Since then, the permanent migration route between the Philippines and the U.S. has solidified. Nowadays, 28% of immigrant registered nurses are from the Philippines. The second-largest contributor is India with only 6%.

It takes two to tango

The Philippines government did not stay complacent when a substantial part of its professional workforce started to migrate. While one might think that the government would try to prevent this ‘brain drain’, the Philippines have actively encouraged OFWs since the 1970s. Indeed, today, OFWs send home USD $35 billion dollars, much of which arrives in hard currency, making the country the fourth-largest recipient of overseas remittances in the world. It amounts to 10% of the GDP.

Seeing the enormous economic benefits OFWs money brought to the country throughout the decades, the government pushed Filipinos through a growing network of educational institutions and vocational schools to train them into easily exportable workers. The plethora of merchant marine academies, nursing schools (many of which date from the American colonization) and training centers for domestic workers are a testament to this phenomenon. Domestic workers, in particular, learn basic phrases in Chinese and Arabic, and how to set tables according to different cultures.

The Philippine government has also set up administrative structures to make the process of going abroad even more accessible. Notably, the Overseas Workers Welfare Administration (OWWA) negotiates international labor terms for their workers and even rescues them in case of a disaster. In 2012, when the Arab spring spread across Iraq and Syria, OWWA sent a rescue mission to carry home domestic workers living there. More recently, OWWA was caught in the middle of the growing US-Iran conflict stemming from the assassination of Iranian commander Qasem Soleimani. As of January, 7,000 Philippino workers were in Iraq and Iran, making their extraction extremely difficult due to such a large number. In the past, OWWA has received assistance from the International Organization for Migration (IOM) which chartered flights from Damascus or Tripoli to Manila. However, in the case of Iran, it is unclear if the IOM will get involved due to the high expenses such a mission would require.

As a result of the large presence of Filipinos in the Middle East, the Philippines’ interests in protecting the OFWs is often in conflict with their allies’ goals in the region. For example, in 2004, President Gloria Macapagal Arroyo withdrew Filipino forces from Iraq despite its commitments to the US and Australia military alliance. According to scholars, the Philippines were marking their priority as ensuring the return home of their citizens abroad as opposed to fulfilling their engagements. Another example is when the country abstained from a vote at the UN Human Rights Council condemning the Syrian government for human rights violations in 2012. Albert del Rosario, then the Philippines’ Foreign Affairs secretary, noted that the Syrian government was currently helping with repatriation efforts, therefore, as long as Filipinos were in danger, the country could not take a firm stand against the al-Assad regime.

These government measures such as OWWA have proven effective in encouraging the export of labor despite the sometimes unsafe conditions of workers abroad, despite the country itself facing a nurse shortage, it exports 20,000 nurses every year. Yet, nurses are but the tip of the iceberg. There are 10 million OFWs. Half of them live in Saudi Arabia or the Gulf, working as maids, nurses, drivers, or hotel staff. Many work in China as hotel band singers. Many more work in Hong Kong and Singapore. An astonishing third of the global seafarers are Filipino.

Money does not come easy

Despite their disproportionate prevalence in the American healthcare industry for what is now many decades, many Filipinos still face discrimination. They often work in jobs where they are overqualified and underpaid. They also face the consequences of traditional gender, race, and immigration status discrimination. Nurses have founded many associations to further their rights, such as the Philippine Nurses Association of Southern California and its sister chapter in Northern California. Through community building, networking, and sharing best practices, Filipino nurses have mobilized.

The same cannot be said for other common industries for OFWs. In Saudi Arabia, reports of mistreatment of nannies and domestic workers are mounting. Filipinas, since these jobs are mostly occupied by women, have detailed their experiences of physical or psychological abuse. Employers confiscated passports, starved their workers, or forbade them from leaving the residence. Some also state having experienced sexual assault and rape. Despite overwhelming reports of abuse, there have been no real consequences on the relationship between both countries. While, in 2018, the Philippine government banned workers from going to Kuwait after four women committed suicide due to the unbearable working conditions, the same has not been done with Saudi Arabia. Indeed, over 1 million Filipinos work in the country which is also relatively peaceful compared to its Arab neighbors, making the money flows between both countries an important source of revenue. In a recent 2018 case, Fahima Alagasi’s Saudi owner poured boiling water down her back and neck, giving her second degree burns. As she managed to escape from the hospital to reach the Filipino embassy, she was brought home. President Rodrigo Duterte is said to have discussed Alagasi’s case with prince Abdulaziz bin Saud bin Naif, but no concrete change in policy has been made to protect OFWs in Saudi Arabia.

As the second COVID-19 wave rages ferociously across the U.S., OFWs are hit particularly hard. Most of them are concentrated in bedside and critical care, making it especially difficult to social distance. A third of all nurse deaths due to COVID in the U.S. are Filipino, despite making up only 4% of the entire nursing workforce. The Philippine government will also see the impact of COVID-19 due to its OFWs-reliant economy. Seeing as 12% of households depend on OFW revenue, the country is likely to see a massive rise in poverty as many lose their jobs or experience pay cuts. With little social security measures accessible, we will likely see a significant increase in unemployment and poverty rates. It is estimated that between 300,000 and 400,000 jobless OFWs are now coming home. Only, this time, December does not spell celebration and family reunification, but fear at the incoming economic hardships.

Featured image by Ant Smith and obtained via Flickr under a CC BY-SA 2.0 license.