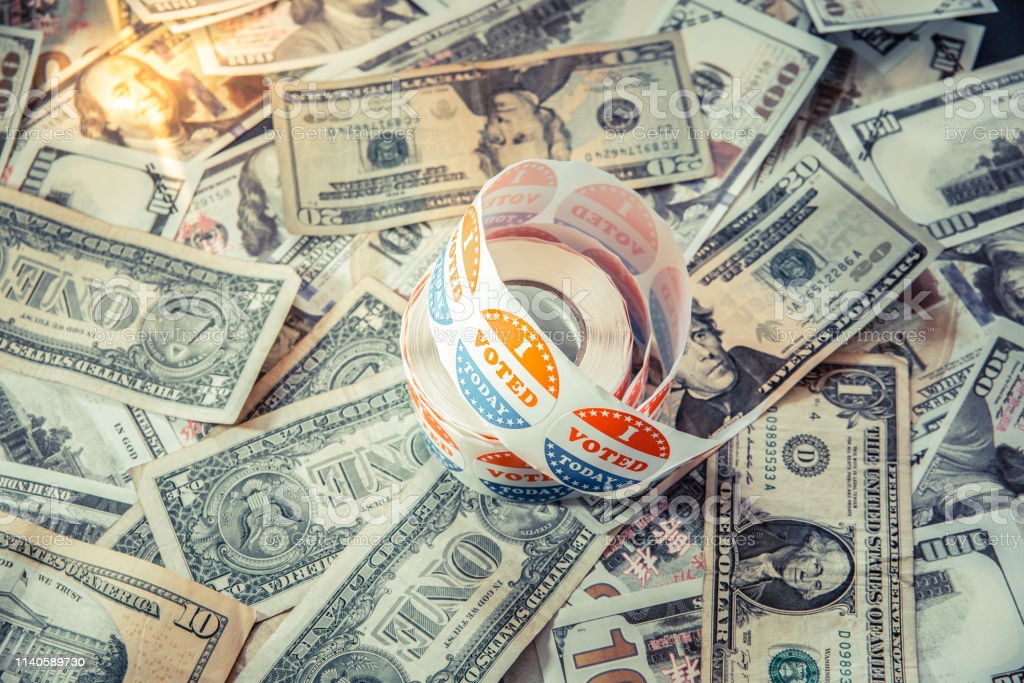 In the 2016 presidential election year, an unprecedented $6.5 billion was spent on political ads in the run-up to November. According to the Center for Responsive Politics, which tracks campaign finance patterns, the price tag for the 2020 election cycle, including campaign spending and advertisements, is set to surpass a cumulative $14 billion (including $6.6 billion for the presidential contest and roughly $7.2 billion for Congressional races). According to preliminary Federal Electoral Commission filings for 2020, Joe Biden is set to break over $950 million in external funding, compared to Trump’s $333 million, setting Biden on track to be the ‘most expensive presidential candidate’ for office ever. Overall, Democrats also outspent Republicans in an unprecedented 2-1 ratio (roughly $5.8 to $3.8 billion in total) in the 2020 races for Congress and the Senate.

This ‘Big Money’ influence is not a new phenomenon and predates 2020. Campaign finance, typically referring to monetary funds, donations, and credit that is fundraised for the purpose of political expenditure or campaigning in supporting a particular party or candidate for office has often taken a backseat in political discourse. Despite this, the recent surge in campaign spending in the 2020 elections holds deep implications for free speech and the democratic process.

In the 2010 Supreme Court case Citizens United, the court overturned pre-existing independent restrictions established by the federal government on communication and electioneering expenditures, on the grounds that it violated the Free Speech Clause of the First Amendment. As a result, multinational corporations, labor unions, non-profits/NGOs, and private sector entities, were to be treated as individuals in exercising their right to free speech through monetary donations. Furthermore, they would become virtually unrestricted on grounds of the quantity and frequency of such funding.

This court ruling may be a significant precursor to the rise of ‘Dark Money‘; Dark Money can be understood as a form of spending on political advertising or as donations to a party or political campaign. The catch is that the original source of the donation is not disclosed, meaning that any donation or advertising can only be traced to the last organization that spent the money. This means that private donors often funnel capital, or Dark Money, through opaque, third-party handlers to big super PACs that then give to political campaigns or buy attack ads. To date, over $1 billion of Dark Money has been spent in elections.

In the 2019-2020 election cycle, 2,218 groups have officially registered as super-PACs while reporting funding of over $3 billion, where roughly $2 billion was spent on political attack ads and campaigning in key swing states. Biden’s bid was backed by $132 million of these anonymous super-PAC funds, while Senate Majority Leader Mitch McConnell’s super-PAC Senate Leadership Fund saw $63 million in Dark Money from large organizations like One Nation, which was a significant portion of the $239 million funneled into the Republican Senate Campaigns. On the other hand, the Sixteen Thirty Fund gave $52 million to support Democratic bids for office. As long as legal restrictions and regulations on Dark Money are lenient and plagued with loopholes, it is clear that both parties will seek to exploit the system as much as possible; while overshadowing a transparent democratic process.

Campaign finance reformists have argued that “We the People” has often been misappropriated and exploited to mean “We the Wealthiest.” A non-partisan assessment by the Sunlight Foundation found, in the 2012 election year, that approximately 28% of all disclosed political contributions were from the ‘1% of the 1%,’ in which certain voices are distinctively elevated over other ones. However, critics of reform have been vocal about how limiting the ability to spend money in politics translates to limiting the ability of political expression itself. More specifically, if the government intentionally controls the amount of money you are permitted to spend in terms of political advertisements, it indirectly censors and controls the topic of speech. It is clear that when there is an evident gap of who can contribute to political expenditure and who cannot, government restrictions may not actually be limiting people’s ability to communicate, but rather is preventing them from silencing other ‘less wealthy’ voices.

Where do we go from here?

There are several caveats we can take away from the 2020 US election year. Firstly, empirical statistics show that fundraising and spending disproportionately large sums of capital is not only becoming normalized as an entrenched and ‘unchangeable’ aspect of US politics, but 2020 appears to be only the tip of the iceberg. ‘Dark Money’ donations and ‘Third-Party funding’ that is spent on advertising, campaign expenditures, or the reciprocity of small political favors, have seen unfettered proliferation since the 2010 Citizens United decision, with little sign of slowing down.

As seen with the Democratic presidential victory in 2020, money is not only increasingly pervasive, but it holds an important stake in influencing the chances of electoral success and victory. However, as the realm of public civic engagement becomes appropriated to fit the interests of wealthy donors and multinational corporations, votes seldom become reflective of the people’s will but more as the by-product of money’s far-reaching influence.

Thus, campaign finance reform is a bipartisan issue that may affect the political capital and speech of both parties and voters. Former President Teddy Roosevelt once stated that “There is no enemy of free government more dangerous and none so insidious as the corruption of the electorate.” As large corporations and donors continue to indirectly speak for the public instead of as an equal part of it, reform that preserves the essence of free speech in the US may become increasingly difficult to achieve.

Featured image by Joaquin Corbalan and obtained via iStock under a CC BY-SA 2.0 license.