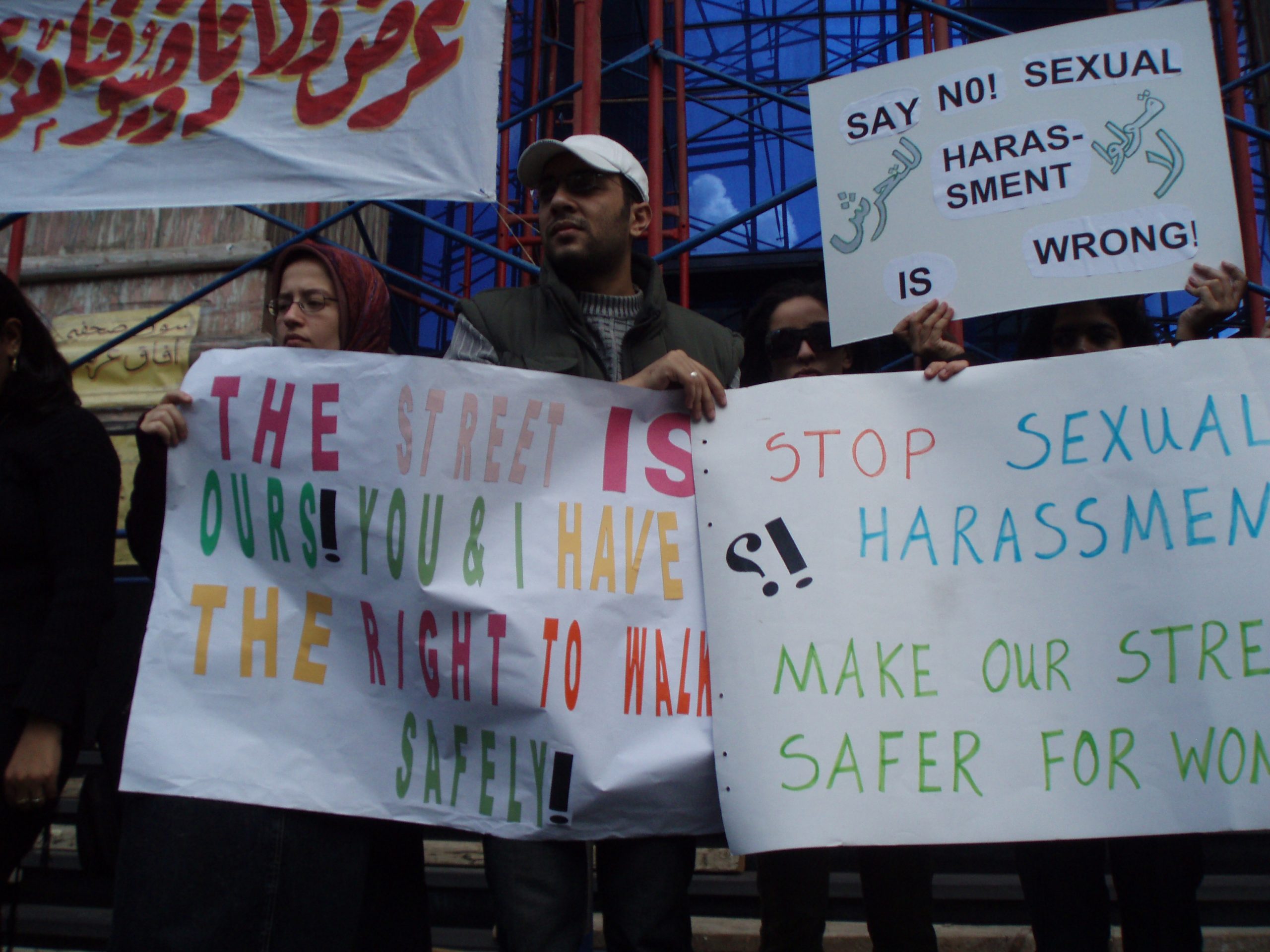 On October 14, 24-year old Mariam Mohamed was walking home from work in Maadi when three men in a car stopped her, verbally and sexually harassed her, and attempted to steal her purse. Fighting back, she was eventually dragged on the asphalt streets of Cairo until she hit a parked car, dying of her injuries later that same day.

It’s a tragic story, but not an unfamiliar one. Walking alone in the streets of Cairo carries the perpetual risk of being sexually harassed or robbed if you’re a woman. Mohamed’s death only adds fuel to an already fiery discussion about sexual violence against women in Egypt following the arrest of Ahmed Bassem Zaki in July. Zaki, a student at the American University in Cairo, has been accused of assaulting, raping, and blackmailing women for sexual favors, including three underage girls. So far, over one-hundred girls and women have offered testimonies against Zaki online.

Zaki’s arrest opened the proverbial floodgates, and the subsequent outpouring of testimonies from hundreds of Egyptian women regarding their own experience with sexual violence is being dubbed “Egypt’s MeToo movement”. It has sparked not only a public conversation on the rights of women in Egypt but also prompted the unprecedented: the reopening of a six-year-old cold case.

In 2014, a woman attending a private party at the Fairmont Nile City Hotel was drugged, videotaped, and gang-raped by at least four men. Following fresh public outcry and new testimonies, Egypt’s Public Prosecution Office announced in August that they would be reopening the Fairmont case – and eight men have since been arrested. The outrage following Zaki’s arrest and Mohammed’s death provide the Egyptian government with an opportunity to dismantle a long-standing culture of impunity and a level of violence acceptable even in the eyes of the law that has, beyond the bare minimum, gone unaddressed.

The Egyptian Constitution of 2014 introduced new amendments to the Criminal Code to reclassify the significance of sexually violent crimes. Sexual harassment remains a misdemeanor, but felonies now include female genital mutilation, rape, kidnapping, and sexual assault. Egypt has also ratified and recognized multiple international conventions pertaining to women’s rights, including the UN Declaration on the Elimination of Violence Against Women of 1993, and the Convention on the Elimination of All Forms of Discrimination Against Women (CEDAW) in 1981.

Informally, Egyptian women tell a different story. A 2013 United Nations report on sexual harassment in Egypt found that 99.3% of female respondents had experienced some form of sexual harassment.  Furthermore, in practice, Egypt barely reaches the threshold of effective legislation sanctioning sexual violence. The definition for rape is ambiguous in Egypt, where being stripped and penetrated by hands at protest does not legally count as rape. The Egyptian state does not recognize marital rape as a crime, meaning victims have limited options for support and almost no grounds for legal action.

Unsurprisingly, formal protection is lacking in a legal system that was designed to punish women more harshly than men, even when committing the same crime. The Egyptian Constitution guarantees equality before the law for both men and women, but women face much longer prison sentences for charges of adultery, for example. When a bill was introduced to amend the unequal sentences in 2016, it was met with heavy opposition and was ultimately never passed.

Zaki’s arrest as well as the Fairmont case also shed light on the corruption and classism interwoven with Egypt’s culture surrounding sexual violence. Zaki and the eight men arrested for the 2014 gang rape all come from wealthy and influential families, falsifying the notion that only poor, low-income men without the means to get married take out their sexual frustration by assaulting and raping women.

Impunity for perpetrators of sexual violence had, until recently, been codified into the law. Until 1999, a rapist could avoid criminal charges by agreeing to marry his victim, supposedly so that he could spare her the shame of having been raped. The fact that Zaki and the men in the Fairmont case come from affluent backgrounds only further reveal the pervasive culture of impunity.

Sexual violence is a daily possibility at its mildest, and weaponized political violence at its worst. During the Arab Spring, thousands of women descended every day into Tahrir Square, only to be met with intentionally organized circles of sexual harassment and rape. In these aptly named “Circles of Hell”, men would surround a woman and attack her as other men watched on under the guise of trying to help her. With the government deeply unstable and coming apart, there was little enforcement mechanism in an already inadequate system to hold perpetrators of sexual violence accountable. In 2012, after Muslim Brotherhood affiliate Mohamed Morsi came to power, activists alleged that the Muslim Brotherhood would pay to have women who gathered for protests raped. Neither Morsi nor the Muslim Brotherhood bothered to refute the claims.

Sexual violence in Egypt is not just dangerous because it’s pervasive and traumatic: legal consequences also run deep. Women have been imprisoned, arrested, and banned from re-entering Egypt for speaking up about what they have experienced, or even just witnessed themselves. Police arrested the eight men in the Fairmont case, but they also arrested witnesses who were charged with “immoral behaviour”. Egyptian legislation protects women on paper, but provides no protection beyond violent physical attacks, giving every woman reason to question how much they stand to gain – and lose – by coming forward.

Egypt still has a long way to go, both legally and socially. What’s changed, however, in the wake of social media movements that promised the anonymity the Egyptian government could not, is the emergence of an unprecedented institutional response. In August, the Egyptian parliament passed a bill guaranteeing the anonymity of any witnesses of sexual violence who come forward. Al-Azhar Mosque, one of Egypt’s highest religious authorities, released a statement in July condemning sexual assault, calling women’s clothing a “delusional excuse” for sexual harassment. These are only minor victories for women in Egypt; there is a long road ahead for women living in a country where, in the eyes of the law, a man’s promiscuity is a woman’s crime.

Nevertheless, the public discourse is changing. Though the culture may still be too deeply embedded to eradicate sexual violence completely, Egyptian authorities are slowly rising to the occasion to punish sexual predators. Ahmed Bassem Zaki’s arrest presents a critical moment for gendered legislation in Egypt; Mariam Mohamed’s killing serves as a reminder of the urgency for meaningful change. Are these markers for progress, or only performative actions from an authoritarian regime diverting attention away from a deeply-rooted problem? Only time – and women – will tell.

Featured image by Hossam el-Hamalawy and obtained via Flickr under a CC BY-SA 2.0 license.