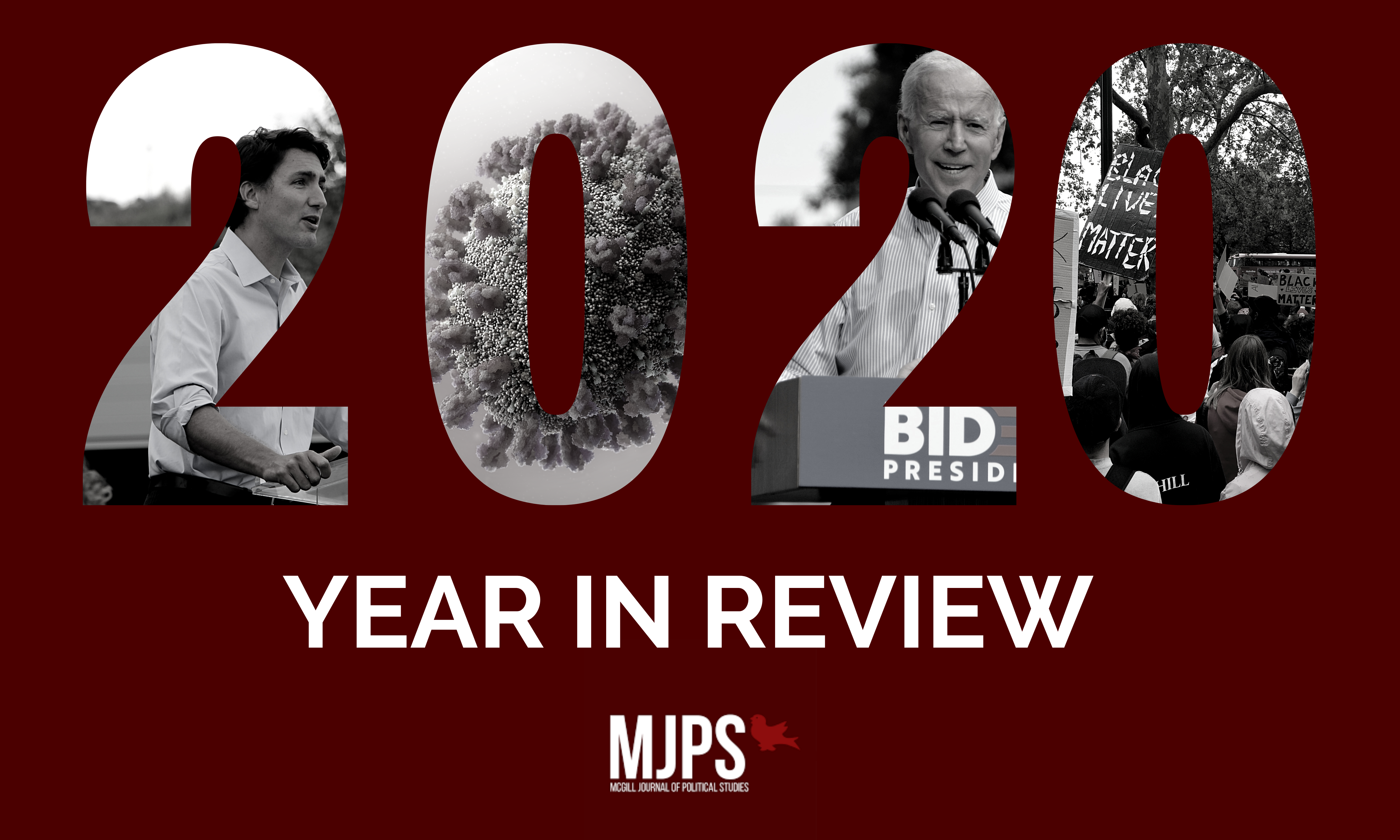 To say the least, 2020 has been a tumultuous year. From January to December, many political, economic, and social events have become landmarks in human history. As an entirely student-run publication, the McGill Journal of Political Studies (MJPS) Online has been honoured to provide insight on these landmarks to our readership in the McGill community and beyond. With over four hundred articles on international relations, Canadian politics, comparative politics, and political theory published this year alone, the MJPS has rounded up some of the major political developments of 2020.

In Australia, the year started with the legacy of a persistent and growing issue — climate change. As of January 13th, 146 bushfires devastated the country, killing 24 people and destroying at least 2 000 homes. As the leader of the largest exporter of coal in the world, Prime Minister Scott Morrison’s approach to this crisis and the argued shortcomings of global climate policy in 2020 have led some to conclude that climate change will likely reinforce the current economic and political order, rather than up-end it. Britain also ratified it’s formal exit from the European Union on January 31st, beginning a diplomatic “transition period” for 11 months.

On January 8th, Ukraine International Airlines Flight 752 was shot down by Iran, killing 176 passengers. Following a U.S. airstrike on January 3rd that killed Iranian General Qassem Soleimani and a series of ballistic missile strikes conducted by Iran on January 8th, the crash’s timing exacerbated regional and international tensions. The crisis also had implications for Canadian foreign policy, as it became one of the first significant foreign policy challenges in Trudeau’s second term as Prime Minister.

Following the World Health Organization’s declaration of COVID-19 as a global health emergency on January 31st, February saw the early political, social and economic ramifications of COVID-19. In a worldwide trend marked by the “politics of fear,” February saw the rise of scapegoating, xenophobia, and racism perpetrated against the Chinese diaspora worldwide. Against the backdrop of a U.S.-China trade war, COVID-19 also triggered significant downturns in the global economy and rising food prices.

In Canadian politics, members of the Wet’suwet’en Nation and allies formed a blockade on C.N. railway lines in British Columbia and Ontario to protest the Coastal GasLink pipeline. While provincial governments criticized the blockade for disrupting Canada’s supply-chain logistics, members of the Indigenous nation argued that the pipeline’s construction path encroached on their unceded territory.

COVID-19 continued to dominate news headlines and challenge globalization’s steady growth with arguably uncoordinated travel bans. While the virus may have been new, it exacerbated long-standing inequalities and health and welfare system deficiencies. By March, 72 per cent of residents who died from COVID-19 in Chicago, America’s third-largest city, were Black. Similar patterns across major US cities highlight how poverty, environmental pollution, and limited access to medical care, experienced disproportionately experienced by racialized communities, make them particularly vulnerable to the pandemic. In Canada, many provincial governments opted for a “colour-blind” response to the pandemic, with Ontario’s Chief Medical Officer of Health refusing to collect race-based data.

On March 3rd, with 566 delegates in the Democratic primary elections, former Vice-President Joe Biden became the Democratic Candidate for the US Presidential election. On March 6th, Mexico saw a historic protest, as hundreds of feminists and activists challenged the number and normalization of femicide in the country. On March 7th, thousands of women in Mexico also participated in a nation-wide strike from work, school, and housework, demonstrating a #DíaSinMujeres (#DayWithoutWomen) in the country. On March 20th, the G-20 teleconference also highlighted the importance of international cooperation in addressing the pandemic and the socioeconomic issues it leaves in its path.

On May 1st, Prime Minister Trudeau announced a ban on assault-style weapons in Canada. In a move that has been described as legally inadequate, the announcement came after the deadliest mass murder in Canadian history on April 18th in which Gabriel Wortman used two illegally obtained semi-automatic rifles to kill 22 people in Nova Scotia.

While in February, President Donald Trump promised to soon “have the number [of COVID-19 cases] close to zero” the steady rise to over 300 000 cases by the first week of April challenged the idea that COVID-19 was just another flu. Amid his argued mishandling of the pandemic, US-China relations continued to deteriorate as both parties worked to limit the number of American or Chinese journalists in their respective countries and officials in the Trump administrations floated conspiracy theories about the origins of the virus.

On May 25th, George Floyd, an unarmed Black man, was killed during an arrest over the alleged use of a counterfeit $20 bill by Minneapolis Police Officer Derek Michael Chauvin. In outrage over Floyd’s death, police violence, and systemic racism, protests erupted in Minneapolis the next day. By the end of the week, Black Lives Matter (BLM) solidarity protests emerged worldwide. The protests continued throughout the year and were marked by disruptive tactics and iconoclasm, as protestors tore down statutes honouring Confederate soldiers and slave traders, among others.

BLM protests were also met with further police and white supremacist violence. In June, Trump deployed thousands of National Guard troops to Washington D.C. and during a protest on August 25th over the shooting of Jacob Blake, Kyle Rittenhouse, a 17-year-old from Illinois, fatally shot two protesters during a Black Lives Matter protest in Wisconsin.

In Canadian politics, Alberta’s Critical Infrastructure Defense Act came into effect, controversially criminalizing obstructing the use or operation of “any essential infrastructure.” While Indigenous communities and workers’ unions criticized the Act for encroaching on civil liberties, David Dreeshen – Alberta Minister of Agriculture and Forestry, argued “no one is above the law,” especially when it “interferes with commerce.”

The United States-Mexico-Canada Agreement also went into effect on July 1st. With some changes for the auto sector, the U.S. access to the Canadian dairy market, and investor-state dispute settlement rules, the agreement was comparable to NAFTA, but celebrated by Trump’s administration nonetheless. Internationally, the African Union-hosted talks over the Egypt-Ethiopian Renaissance Dam collapsed on July 14th. While Ethiopia favoured a hydroelectric dam on the Nile for the prospective economic boost, Egypt viewed the dam as a threat to the 93 per cent of its population living along the Nile or in its delta.

In August, Prime Minister Justin Trudeau faced the third ethics investigation in his five years of leadership over the selection of WE, a charity Trudeau has personal and financial ties to, for a $900-million Canada Student Service Grant program. On August 18th,  Finance Minister Bill Morneau resigned and was replaced by Chrystia Freeland — the first woman to become Finance Minister in Canada. While Freeland’s appointment was celebrated as a win for women’s representation, many questioned whether her appointment’s timing was a set-up. The Federal Conservative Party of Canada also saw leadership changes in August as  Erin O’Toole was elected the new leader of Canada’s Conservative Party.

As we approached the return to school, most Canadian provinces adopted hybrid virtual and in-person activities and cohorts to avoid large gatherings. On September 28th, the death of Joyce Echaquan, a 37-year-old Atikamekw woman from the community of Manawan, in a Quebec hospital challenged assumptions about Canada’s position as a supposed haven of multiculturalism.

On September 27th, a historical conflict over Nagorno-Karabakh, an ethnically Armenian region controlled by Azerbaijan, was revitalized as artillery strikes targeted military facilities and civilian infrastructure. The two nations accuse each other of violating a series of humanitarian ceasefires.

On October 19th, Bolivians elected President Luis Arce of the Movimiento al Socialismo (Movement for Socialism) party. The election occurred one year after President Evo Morales was forcibly replaced by Jeanine Áñez of the right-wing Democrat Social Movement party.  On October 21st, French President Emmanuel Macron emphasized the importance of secularism and denounced the alleged separation of the Islamic values from the French republic in a eulogy for for Samuel Paty – a history teacher killed by a jihadist five days prior. Later in the month, Macron also defended the publishing of a Charlie Hebdo caricature of the Prophet Mohammed – an image deeply insulting to many Muslims. These statements were met with calls by religious groups and leaders to cut diplomatic ties with France and boycott French products. Debates over French and Quebec secularism continued in 2020 with Islamophobic sentiment and contradictory applications that undermined supposed ideas of religious neutrality.

On Friday, November 6th, Democratic Presidential candidate Joe Biden secured the 20 additional electoral votes needed to win the U.S. Presidency. In his victory, Biden successfully flipped traditionally Republican states such as Arizona and Georgia – a feat primarily attributed to local grassroots organizations who worked to secure access to vote for the Black electorate.

In Canadian politics, the dispute between commercial and Mi’kmaq fishers over Mi’kmaq treaty rights during the conservation season continued, leading to violent attacks against the Mi’kmaq fishermen and their property.

In a historic moment headlines have dubbed as “V-Day,” December saw the earliest administration of COVID-19 vaccinations in the U.K., United States, France, Canada, and Russia. As the vaccine promises some return to normalcy in 2021, key issues persist over the administration of the vaccine as less economically developed states have been pushed to the back of the queue by wealthier nations.

Undeniably, the economic, political, and social implications of COVID-19 have been a driving force for 2020. With the advent of a COVID-19 vaccine, it remains to be seen how the pandemic will shape 2021. In any event, the MJPS Online has been honoured to consistently Get the Insight Out to our McGill readership and beyond.

Thank you to the MJPS Editorial Board, staff writers, social media team, and contributors for their dedication to publishing quality political analysis. To our readers, thanks for joining us. See you next year!