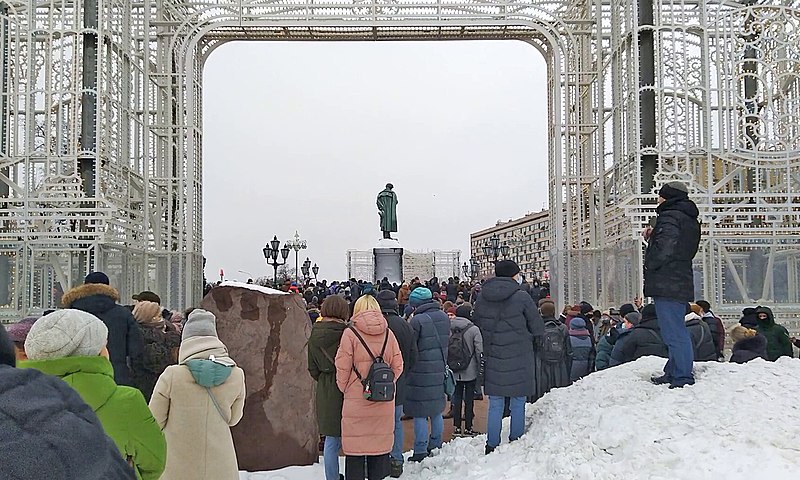 When Alexei Navalny returned to Russia from Germany on January 17, he was arrested immediately upon his arrival in Moscow. The day after, a judge sentenced Navalny to 30 days in jail on the grounds that he violated his parole. In response to his arrest, on January 23, 100,000 people across Russia came out to protest the arrest and the Russian government’s corruption, including 40,000 in Moscow.

Navalny, a lawyer, politician, and anti-corruption activist, is the current face of opposition to Vladimir Putin, Russia’s president. He has been active in Russian politics since 2008, when he blogged about corruption in Russia’s state-run companies, with his prominence growing since then. In 2011, he led the protests against alleged fraud in that year’s legislative elections. He has also been convicted of embezzlement twice — in 2013, as a candidate in Moscow’s mayoral elections, and in 2017, at a retrial for the same case, when he had intentions to run against Putin in the presidential elections. He denied the charges of embezzlement both times.

Navalny’s continued opposition to Putin and the Russian government has positioned him as a threat to the regime, leading Putin to allegedly take action against Navalny. In August 2020, Navalny was poisoned with a nerve agent from the Novichok family, which is banned under the Organisation for the Prohibition of Chemical Weapons. The poisoning nearly killed him, resulting in him being subsequently put into a medically induced coma at a German hospital. Due to Russia’s use of the nerve agent in the past, including in an attack on a former Russian spy in Salisbury, England in 2018, Navalny, as well as the UK, the US, and Germany, believe Russia is behind Navalny’s poisoning. Putin has denied these claims.

Although warned against it by Russian prosecutors, Navalny chose to return to Russia. After Navalny’s arrest, his team released a YouTube video that investigated allegations of corruption against Putin and his allies. The video, entitled “Putin’s Palace,” is almost two hours long, and claims that Putin’s cronies built Putin a luxury palace worth $1.35 billion USD. As of January 25, the video has been viewed 80 million times. Putin has denied the allegations that the palace belongs to him or his family, but has not addressed allegations that it was built and operated by friends on his behalf.

The video is partially responsible for the size of the protest, as well as Navalny’s immediate arrest at his arrival. Not everyone who protested directly supports Navalny, but responded to his call to protest his arrest due to larger grievances against the government, including declining living standards, increasing political restrictions, and corruption. A December 2020 poll from Transparency International revealed that 44 per cent of Russians believe corruption is widespread in their government at the highest levels.

Prior to the protests, Russian celebrities spoke out against Navalny’s arrest, some even encouraging people to join the protests. These celebrities include actors, authors, athletes, and social media influencers. Information about the protests also spread on social media, particularly TikTok, with videos with the hashtag Navalny being viewed over 800 million times by January 22. One of these videos included a young woman teaching English phrases for those attending protests, in order to sound American and potentially evade arrest.

In response to the growing popularity of the protests, Russian authorities warned people not to attend them, stating they were illegal. Authorities also jailed members of Navalny’s team, including his press secretary, Kira Yarmysh, and the co-creator of “Putin’s Palace,” Georgy Alburov. Teachers were told to create alternate programs for students to participate in on Saturday, January 23, rather than attend the protests, and some universities threatened to expel students who participated in the demonstrations. The state also threatened to arrest and prosecute those who protested. However, these actions do not appear to have negatively impacted attendance at the protests.

Protests occurred in over 100 towns and cities throughout Russia. According to the OVD-Info Protesting Group, the Russian police detained over 3700 people, including Navalny’s wife Yulia, who was released hours later. According to the group, this is the largest number of detainments in their nine-year history, including 1400 detained in Moscow. While some detainees were released, others have been given jail time from a week to 15 days, or fined.

The international community has taken note of the Navalny arrest, with the United States and the European Union responding directly to the protests. White House press secretary Jen Psaki called for the immediate release of Navalny and those detained in the protests. On Twitter, a spokesman for the US state department, Ned Price, condemned the Russian police’s use of “harsh tactics against protestors,” also calling for their release. The European Union’s foreign minister also spoke out against Navalny and the protestors’ arrests, but did not indicate whether the EU would impose further sanctions on Russia.

As of January 27, Navalny’s team has called for further protests against Navalny’s arrest for the upcoming weekend. It is unclear how successful the coming protests will be, and if they will lead to Navalny’s release. However, the size of the protests on January 23 indicates the growing reach of Navalny’s protest movement, as well as the Russian people’s increasing frustration with the state’s corruption and Putin’s government.

Photo by Ludvig and obtained via Wikimedia Commons under a CC BY-NC 1.0 license.