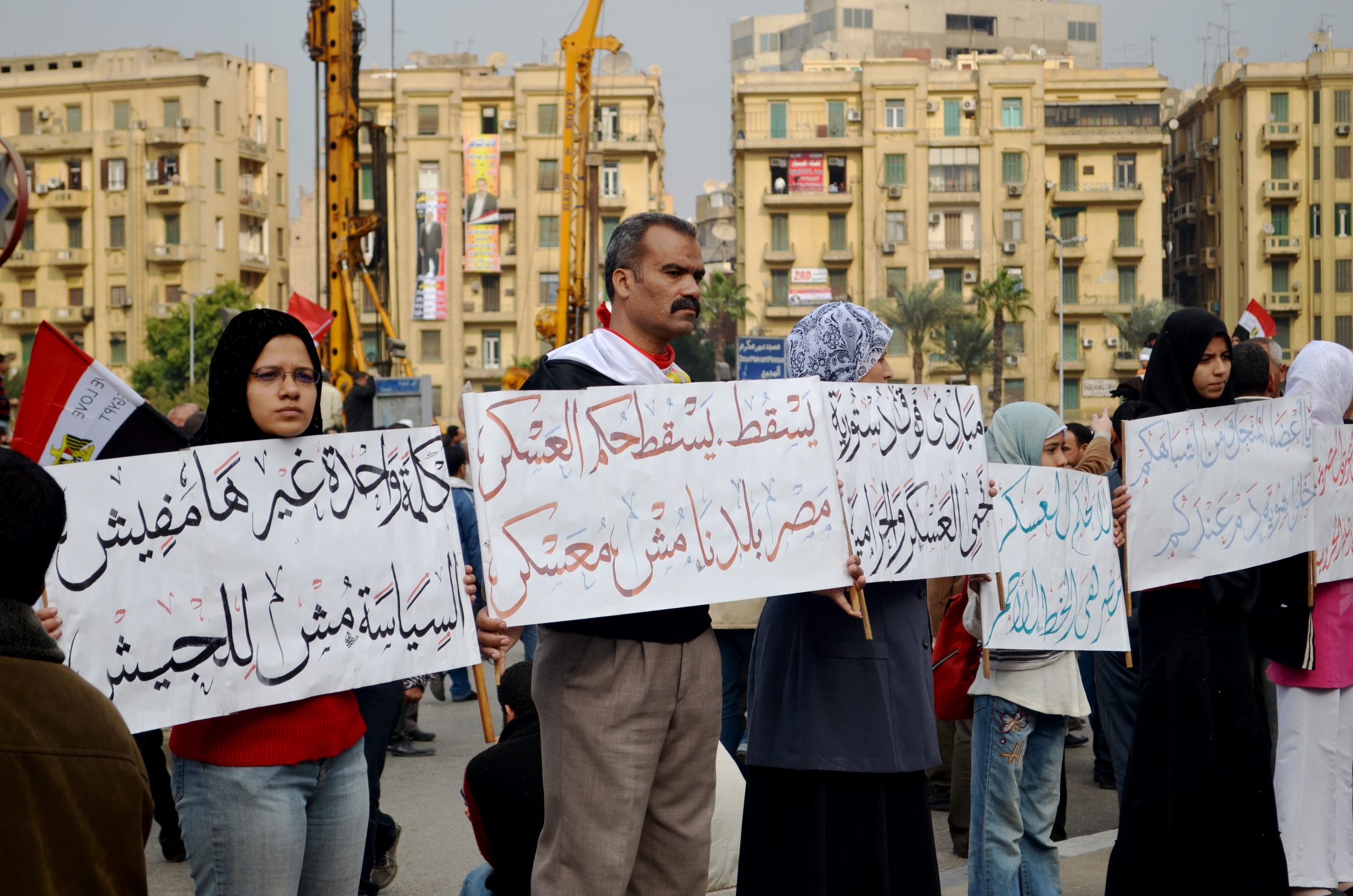 Yesterday, Egypt marked the tenth anniversary of the end of iron fisted rule under late President Hosni Mubarak. The 2008 demonstrations, known as Mahalla intifada, denounced bread price increases in El-Mahalla, a large city in the Nile Delta, and became the spark that lit the Egyptian revolutionary movement which became part of the so-called Arab Spring. In January 2011, millions of Egyptians took to the streets of Cairo and pressured Mubarak to resign after 29 years of presidency.

Looking back on ten years after the 2011 uprisings, Egypt has been embroiled in national political strife while seeking to restore its fragile economy, redesign its rural landscape, and address old grievances. Freedom and social justice, however, seem nowhere on the agenda.

The events that transpired in early 2011 led a polarized Egyptian society into elections which ushered Mohammed Morsi to power in 2012. As the first democratically elected president, Morsi gained support from members of the Muslim Brotherhood and tactical pro-revolution voters for his calls for reforms, which many feared would result in the backsliding of human and women’s rights. In 2013, the government blacklisted the Muslim Brotherhood after ousting Morsi from the presidency in a military coup accepted by pro-revolution activists. Before his death in 2019, Morsi was convicted of killing hundreds of political dissidents and inciting sectarian violence by a trial court that Amnesty International deemed unfair and lacking due process.

The 2013 coup d’etat has considerably impacted Egypt’s political landscape, placing former Egyptian Minister of Defense Abdel Fattah al-Sisi as the country’s leader. President al-Sisi has pledged to pursue a “ferocious war” against terrorism in Egypt. Corruption under Mubarak and the army’s major role in infrastructure development has propped up the image of Egyptian armed forces in the eyes of military supporters. The military’s growing involvement in politics and its economic position has earned Egypt the name “the Officer’s Republic.”

To stimulate the economy and, more importantly, legitimize itself, the al-Sisi administration is undertaking several major construction projects, including the expansion of the Suez Canal beginning in 2013. This project is set to reduce unemployment, especially among the youth population, as Egypt had a youth unemployment rate of 31 per cent in 2019. Due to rising levels of pollution in the Nile River, an essential source of fertile soil for farmers, the Egyptian government has focused its efforts on resolving this eminent water crisis by building multiple wastewater facilities across the country. In recent years, disputes over the construction of a hydroelectric dam by Ethiopia on the Blue Nile that would negatively affect Egypt’s water supply have provoked hostilities between the two countries. Recently, these geopolitical tensions have shown signs of abating as Egypt has reached an agreement with Ethiopia and Sudan that will determine their fair share of Nile waters.

Moreover, the al-Sisi administration has commissioned the construction of several megacities to reduce regional disparities and congestion in greater Cairo, which has over 20 million inhabitants. These urban development projects are part of President al-Sisi’s economic agenda to remedy the country’s ongoing housing crisis, overcrowding, and city pollution. Since construction began in 2015, the cost of the New Administrative Capital east of Cairo has totalled over CAD 300 billion as of 2020. However, dreams of a bustling, young city have turned sour as housing in the New Administrative Capital is only affordable for the rich.

Regional imbalances compounded with an increasing population have intensified water inequality and scarcity. Looming threats of food shortages and increasing unemployment rates have prompted the government to restrict water access to farmers and set up food stamps programs, especially in rural areas. As a Nile River polluted with pesticides and waste threatens the agricultural sector, farmers have turned to permaculture, which consists of farming systems that mimic organic processes such as natural water filtration, as a way to sustain themselves. The Egyptian military has also teamed up with several international non-government organizations to provide for disadvantaged groups whose living standards have seriously deteriorated over the years.

Crackdown on political dissidents and journalists has never been more intense than under the Mubarak era. A culture of impunity has remained regime after regime as rich elites and military have maintained a tight grip on the country. This powerful ruling class has infiltrated every sector that theoretically protects civil society from government abuses, such has the media, the police, and the judiciary.

Despite mass killings in broad daylight and incriminating evidence of human rights violations, privately owned media and a politicized judiciary have yet to provide checks and balances on the Al-Sisi administration. In July 2018, the Egyptian parliament ratified a law prohibiting domestic prosecution of military officers for crimes that happened between 2013 and 2016. Since Al-Sisi took power, freedom of assembly has ceased to exist. In 2019, for instance, the Al-Sisi administration arrested multiple influential political opponents who had planned to form a coalition in the 2020 parliamentary elections. As the government has silenced the few anti-government protests that have seen the day of day, little remains of Egypt’s short-lived democracy.

The political vacuum created by Mubarak’s fall has left the Egyptian population vulnerable to abuse and injustice. Resilient youth are sharing their grievances on the Internet, having inherited a repressive government and economic struggles. In September 2020, media influencer Mohammed Ali, exiled in Spain, had encouraged people through social media to organize anti-government demonstrations which escalated into violent, civil unrest with over 3,000 arrests. The gap between civil society and the military continues to widen, but younger generations are keeping alight the flame of hope for freedom and social justice.

Photo by Al Jazeera English and obtained via Flickr under a CC BY-NC 1.0 license.