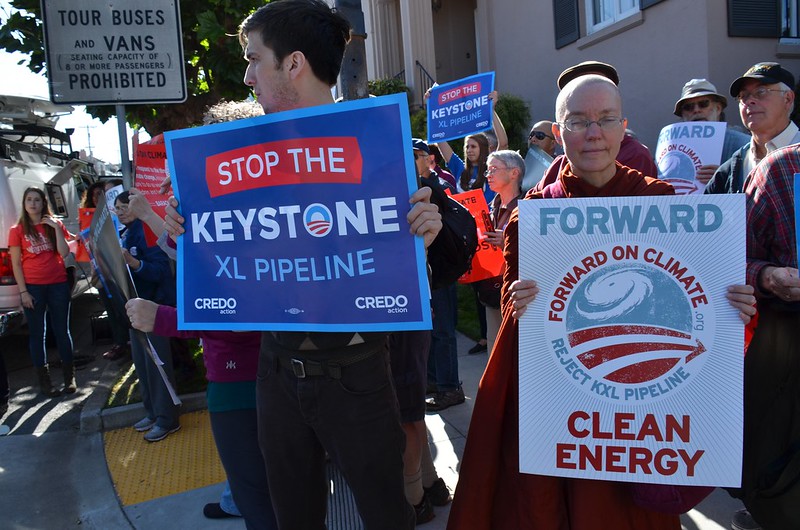 On President Joe Biden’s first day in office, he made the controversial decision to cancel the permit approving the cross-border Keystone XL pipeline project. This pipeline would have carried oil from Alberta through to the United States marketplace. Many Albertans have expressed discontent with the decision to scrap the project, calling it a “slap in the face” to Canadian trade and partnership. However, the cancellation may not be surprising, as it was previously scrapped during Obama’s presidency in 2015, only to be revamped when Donald Trump took office in 2017. The cancellation sets the tone for Biden’s presidency, illustrating a clear move toward clean energy and perhaps other climate-friendly policies. But what does this say about the future of Canadian economic planning?

TC Energy’s (previously TransCanada) Keystone XL pipeline has been politically tumultuous since its inception. An eight billion dollar project, it has gained and lost approval by legislative and executive orders many times since its original proposal in 2008. The project was set to increase fossil fuel transportation into U.S. markets to deliver over 800, 000 barrels per day of crude oil that is found in Canada’s boreal forest (northern Alberta). The project promised a cross-border economic reward that is especially desirable now, considering the COVID-19 pandemic that is bleeding the economies of both countries. However, the environmental costs of pursuing the project may be even higher by increasing greenhouse gas emissions and fossil fuel dependency. Environmental concerns may also make this project disastrous politically amidst the ongoing push from activists for governments to effectively fight climate change through policy reform.

Alberta Premier Jason Kenney has warned that he intends to seek compensation for the project’s termination under chapter 11 of the North American Free Trade Agreement (NAFTA). “This was, in my view, a clear violation of the investor protection provisions in the North American free-trade agreement” Kenney said about Biden’s decision to pull the plug on the pipeline. This illustrates the profoundness of the economic blow in the province and throughout Canada as the country remains highly dependent on the U.S. economy.

With that in mind, Biden’s decision brings into question the future of Canadian cross-border economic planning.

The American economy is about ten times larger than the Canadian economy — which results in Washington ‘calling the shots’ when it comes to the Canada-U.S. economic relationship. For example, in 2018, 75.02 per cent of Canadian exports went to U.S. markets, with oil being the most commonly exported good. More than half of Canada’s imports come from U.S. industries. On the other side of the border, U.S. exports to Canada only account for 18.0 percent of all American exports. This data demonstrates that the Canadian economy is far more reliant upon its American partner than vice versa, evidencing an unequal (but persistent) partnership.

The economic partnership, as it stands, leaves Canada under the heel of U.S. demands, which is demonstrated by the Keystone XL pipeline’s abrupt cancellation. However, this partnership is also inherently neglectful of interprovincial economic planning because the framework centers American development.

While Canada has made it a priority to establish free trade agreements with foreign partners such as the U.S., China, and other countries around the world, the free flow of goods between provinces and territories remains deficient.

In 2017, Canada established the Canadian Free Trade agreement (CFTA). The agreement aims to eliminate trade barriers between the country’s provinces and territories. Despite this agreement and its intentions, current interprovincial trade is lacking in its productivity growth rate. This is because it is easier for businesses to import goods and services from Canadian foreign partners, instead of neighbouring provinces, due to differences in rules and regulatory policies across provincial and territorial borders. Therefore, foreign companies have quicker and easier access to Canadian markets than Canadian companies do.

If U.S.-Canada relations do not progress more fairly, Canada may be forced to explore previously avoided avenues, such as “in house markets,” for the purpose of national economic development. These markets refer to a plan for better interprovincial trade in order to stimulate the economy as the country resurfaces from the COVID-19 pandemic’s economic impediments.

By liberalizing internal trade and harmonizing regulatory policies between provinces and territories, the country could see an increase in Canadian GDP per capita by about 4 per cent. This is especially possible if the current president chooses not to work with Canada to establish better trade relations in the aftermath of Trump’s tumultuous policies. The Trump administration elicited tariffs on Canadian steel and aluminium products, calling Canada a national security threat to American financial institutions. This may allow Biden to focus on simply restoring pre-Trump trade norms with Canada, rather than attempting meaningful improvement.

America’s first priority is and will continue to be its own economy. But if Canada wants to avoid being at the whim of American protectionist orders, the country might consider strengthening its internal national economy separate from the U.S.

If anything is clear, it is that the status quo of U.S.-Canadian relations cannot continue, otherwise Canada risks causing detriment to its own interests. Canadian officials may therefore need to prioritize national interests ahead of American economic relations.

Featured image by Steve Rhodes and obtained via Flickr under a CC BY-NC-ND 2.0 license.