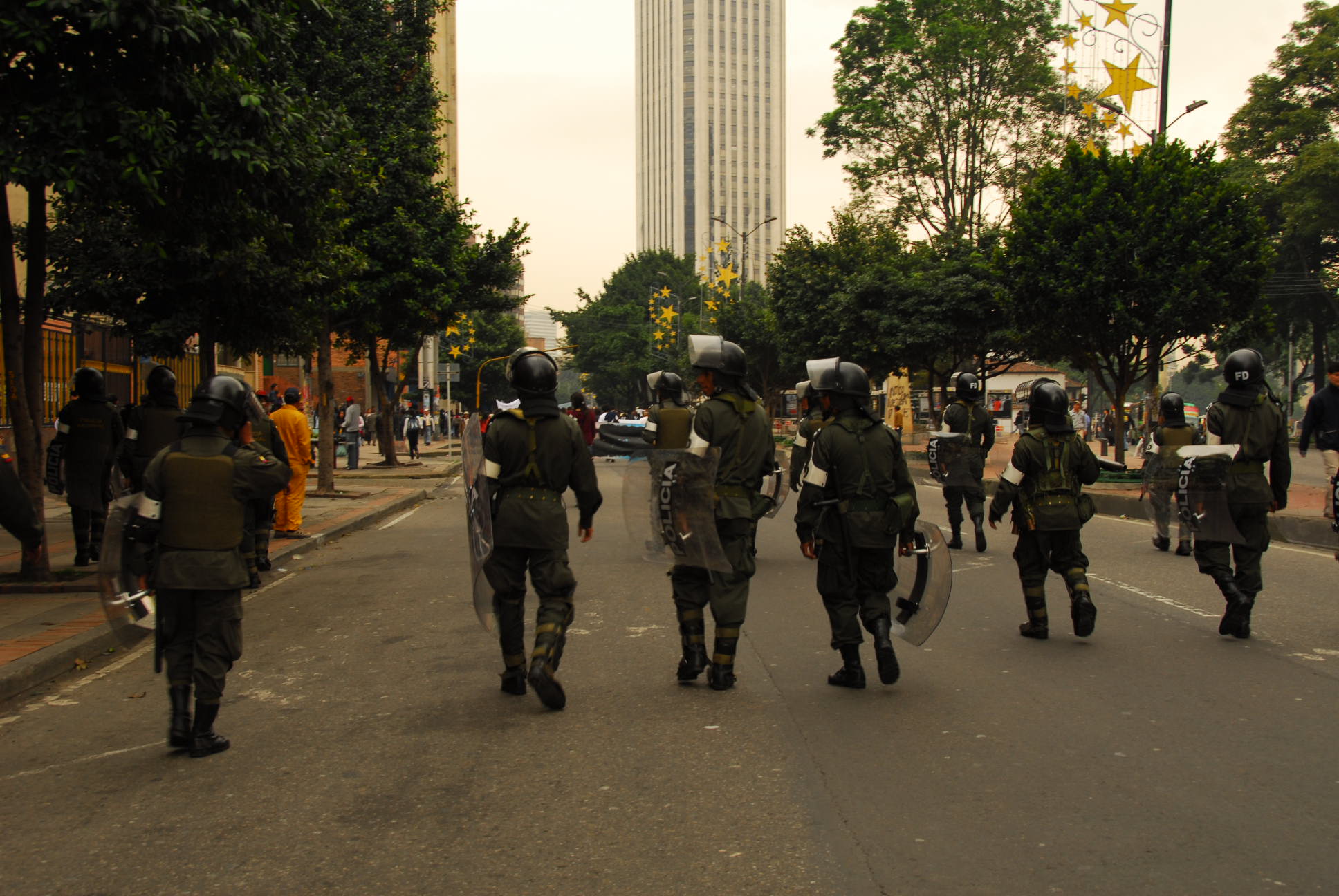 In Colombia, and many other countries in Latin America, security forces have cracked down brutally on protestors in interactions that have been captured on camera and shared widely on both social media and conventional media. These videos reveal excessive, and, in some cases, lethal force used against protestors by The National Police of Colombia, including its infamous Mobile Anti-Riot Squad (ESMAD). Police can be seen beating, shooting, detaining and even killing protesters, as well as launching tear gas canisters. These repressive approaches, which have become more prevalent during recent protests in the country, highlight serious police brutality and a need for urgent police reform.

On April 28, tens of thousands of Colombians took to the streets in several cities—including Bogotá, Medellín, Cartagena, Barranquilla, and Cali—to oppose President Iván Duque’s proposed tax reform in response to the economic crisis generated by the pandemic, which many working and middle-class Colombians say would have disproportionately impacted them while favouring the rich. Although the tax reform proposal was eventually withdrawn and the finance minister resigned, the protests continued to expand as popular anger has been fueled by police violence, widespread poverty, social inequality and political corruption.

Colombia’s national police have responded to the mostly peaceful protests with violent repression, leaving at least 68 people dead . There are additional reports by Colombia’s Human Rights ombudsman and Temblores, which is an organization that tracks police brutality of hundreds injured and arbitrarily detained. Many people have disappeared in the midst of the protests and there have been least eleven cases of sexual violence. The human rights violations committed against protestors have been condemned by the United Nations and the international community.

President Duque, and his colleagues in the right-wing Democratic Center like former President Alvaro Uribe, alleged that guerrillas and criminals “infiltrated” the protests and was said to be “glorif[ying] violence” against protestors online. These narratives and justifications of the use of force against protestors can have tremendous influence among some sectors of the police and armed forces, who admire the former president for his hard-line stance against guerrillas.

The militarization of Colombia’s national police has involved the 140,000-officer force being controlled by the defense ministry, as opposed to the interior ministry as is the case elsewhere in Latin America. Consequently, policing has become entangled with the army. Police officers wear military green and carry rifles, are grouped into military ranks, and are tried by military courts instead of civilian ones.

Police officers often fought on the front lines of Colombia’s decades-long armed conflict with guerrillas and paramilitaries. However, after the 2016 peace deal between the Colombian government of Juan Manuel Santos and the Revolutionary Armed Forces of Colombia (FARC-EP) which ended the conflict, the police remained militarized – as has been made evident by their current violent response to mostly peaceful protests. As cases of police abuses continue to grow, police have been accused of treating civilian protesters like enemies on the battlefield.

Police reform and an end to police violence are among the main demands of the protestors. Advocates of police reform are pushing to move the police force under the control of the interior ministry which would scrap the feared ESMAD riot squad, prioritize human rights training, and limit weaponry. A HRW report released on June 9 also made a series of recommendations to the Colombian government to initiate comprehensive police reform and protect human rights, including transferring the police force from the defense ministry to the interior ministry or to a new ministry.

President Duque initially denied that there is “systematic” police violence, and said he did not believe that “significant” police reforms were needed in Colombia. But under pressure from protestors and the international community, a few police reforms have been announced, such as better training on human rights, a new complaints system, and new police uniforms with incorporated body cameras. Some proposals have been criticized for being cosmetic and insufficient to prevent police abuses and to hold those accountable for their actions. They do not address the militarization of the police and ignore calls to establish a clear separation between the police and military.

Comprehensive police reform is urgently needed in Colombia to protect human rights, ensure the right of peaceful assembly, and hold those responsible for abuses to account. In particular, a civilian force that is separate from the military and that is adequately trained to respond to protestors in a way that is respectful of human rights seems crucial. A key first step, according to the HRW, would be to transfer the police from the defense ministry into the interior ministry. So far, President Duque’s government has only announced various initiatives that fall short of demilitarizing the police.

The protests in Colombia have been fueled by police abuses, but police crackdowns continue, and President Duque has since deployed the military to the city of Cali. Unless such violent repression is ended and there is significant police reform, reports and images of violence by security forces are likely to continue to fuel more protests, which in turn may be met with even more brutality.

Featured image by Brennan Paezold and obtained via Flickr under a CC BY-NC-ND 2.0 license.