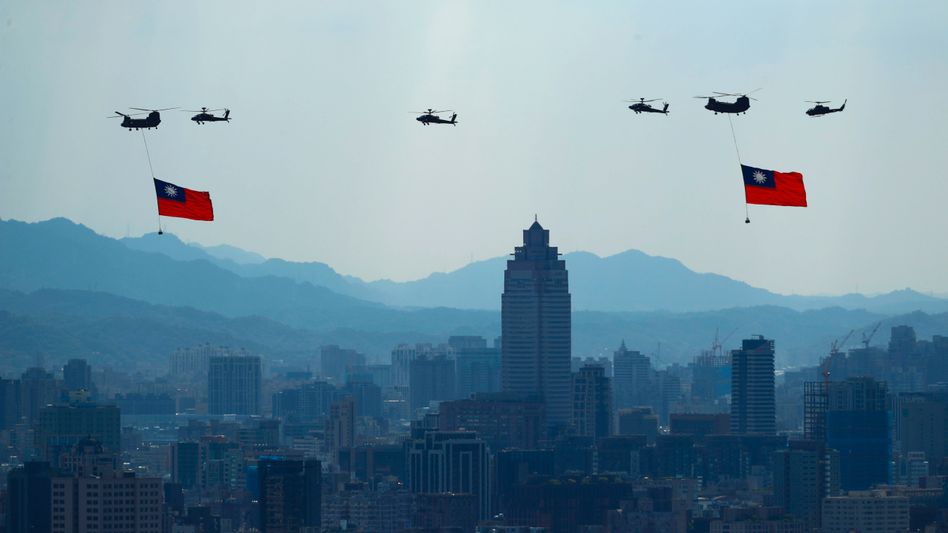 “Time to warn Taiwan secessionists and their fomenters: war is real.” So reads the headline of an editorial published in late 2021 in China’s Global Times. With the threat of a Russian invasion of Ukraine dominating news cycles, it is easy to forget that a remarkably similar situation is unfolding in the South China Sea. Many analysts warn of the possibility of a Chinese invasion of Taiwan – an island democracy of 23 million people off of China’s southeastern coast.

Just as Russian President Vladimir Putin believes Ukraine to belong to the Russian homeland, the Chinese President, Xi Jinping, has expressed an unfaltering desire to “reunify” with Taiwan – by force, if necessary. The United States, though, has rejected these assertions and reinforced Taiwan’s territorial sovereignty – by political, economic, and military means. The issue constitutes a central feature of US-China relations and is imbued with deliberately vague American security guarantees.

The U.S. has, since establishing relations with the People’s Republic of China in 1979, maintained a policy of strategic ambiguity over whether it would militarily defend Taiwan if China were to attack. This was formalized in the “Taiwan Relations Act” passed that same year. The law asserts that, while the U.S. recognizes Taiwan as a part of China and acknowledges the People’s Republic of China (RPC) as “the sole legal government of China,” it will continue unofficial relations with Taiwan, including the sale of defensive arms to the country. This soft security guarantee seeks to maximize U.S. deterrence potential while minimizing the risks of involvement in case of future conflict.

The policy works first to keep China guessing over how the U.S. will respond. Chinese decision-makers must therefore assume that America would come to Taiwan’s defence in the event of an attack, forcing restraint. This is, however, only possible provided the costs of a Chinese invasion remain unacceptably high. To that end, the U.S. has been engaging allies to support Taiwan, shoring up Taiwanese defences, and expanding the limited U.S. troop presence on the island itself.

So far, the policy has maintained a tenuous peace that has successfully protected Taiwan’s independence since its implementation. New developments, however, could indicate a shift in the status quo. China’s economic and military growth, paired with the perception of an American withdrawal from the world stage, has led it to ramp up its posturing towards Taiwan. The Chinese military is increasingly buzzing the Taiwan strait with warplanes, firing missiles into the sea south of Taiwan, and conducting amphibious-landing drills to coincide with official US visits to the island.

While China’s military spending ($252 Billion) remains outmatched by the U.S. ($778 Billion), it now boasts the world’s largest navy, an increasingly modernized military, and technology investments that might give it a short-term advantage in an invasion of Taiwan.

This doesn’t necessarily mean invasion is imminent, as Taiwanese officials have stated. Even with a military as powerful as China’s, an invasion would be complicated by efforts to maintain uninterrupted supply lines, not to mention grappling with Taiwan’s own defensive measures. The shrinking capabilities gap, however, indicates China’s desire to increase its maneuverability on the Taiwan issue by reducing the costs of a hypothetical attack and undermining threats of deterrence from the U.S.

China’s military expansion also comes at a time of great uncertainty for the U.S. The country is deeply polarized and its democratic institutions are in evident need of fortification. The U.S. is drawing down its 20-year long War on Terror with a messy withdrawal from Afghanistan, leaving the population with little appetite for prolonged overseas conflicts. Pair all that with its mishandling of the COVID-19 pandemic and it should come as no surprise why Chinese leaders assert America to be in “irreversible decline.”

Strategic ambiguity also prevents Taiwan from formally declaring independence and provoking China, which considers Taiwan a part of its territory. The policy was intended to minimize the risk of escalation. If Taiwan believed it had full U.S. military support, it might be emboldened to pursue official statehood, forcing Beijing to act or abandon its ultimate goal of reunification.

Despite functioning as a sovereign state, Taiwan is excluded from many international bodies such as the United Nations and the World Health Organization. Taiwan’s inclusion would signal that it operates independently of China – a reality China unequivocally rejects. Beijing has thus used its expanded influence within these institutions to limit or outright bar Taiwanese participation.

Some American lawmakers have advocated replacing strategic ambiguity with a more hardline approach. Recent developments suggest American political will favours this course of action. Former U.S. President Donald Trump’s unprecedented deepening of diplomatic ties with Taiwan, and President Biden’s outright declaration that the US would come to its defence, indicate a bipartisan desire for a tougher US foreign policy regarding China.

While some arguments for a tougher stance have merit, it overlooks the main appeal of strategic ambiguity: flexibility. By obfuscating its security commitment towards Taiwan, the U.S. expands its response options, opting to change support depending on the circumstances.

Any change in the U.S. position towards China is further complicated by the intertwined US-China economic relationship. This reality was evident in the Biden administration’s decision to only impose limited economic sanctions on China after the crackdown on Hong Kong. The need to deter China while maintaining close economic ties lends itself well to an open-ended foreign policy approach like that of strategic ambiguity.

As China grows as a military and economic superpower, the future of Taiwanese independence rests increasingly upon America’s ideological commitment to defend democracy rather than deliberately vague security guarantees. An attack on Taiwan would constitute an attack on the norms and authority of the American global order. Whether and to what extent the US responds will signal how it sees its role in a changing world.

Featured image by Ceng Shou Yi and obtained via Getty Images under an RF license.