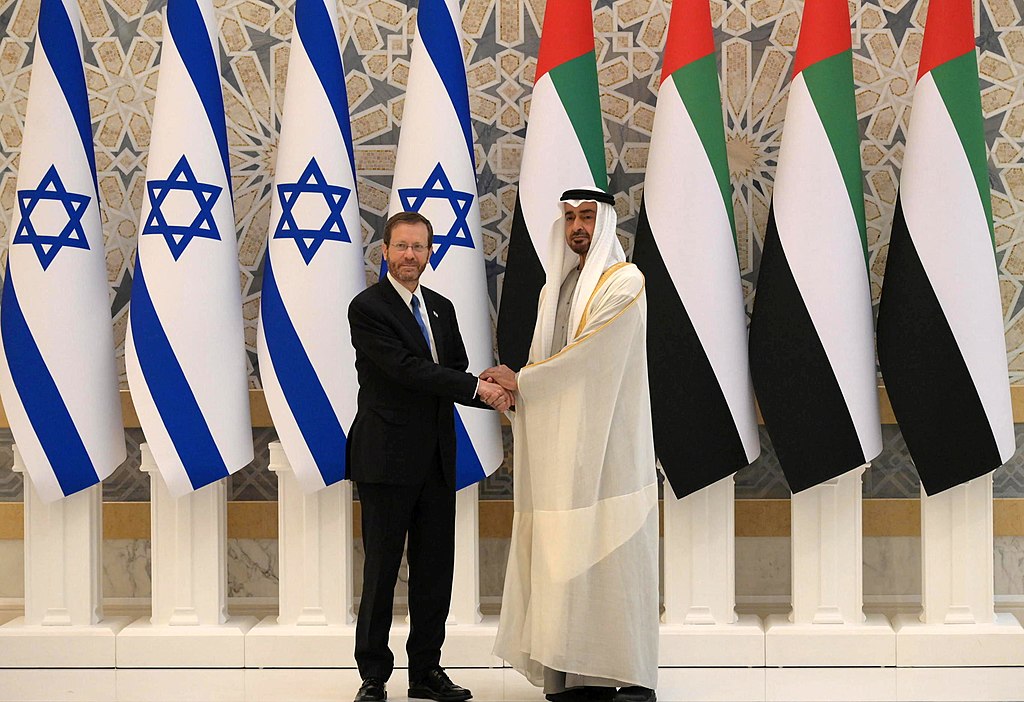 On January 30, 2022, Israeli President Issac Herzog visited the United Arab Emirates  (U.A.E.) to celebrate the Israeli national day at the Israeli Pavilion of Dubai’s Expo 2020 world fair. This is the first visit by an Israeli president to the U.A.E. and while other visits to Arab countries by Israeli officials have occurred prior, this is the first time that an Israeli presence is culturally celebrated in an Arab country. His positive welcome by the nation has been met with a backlash from Arab celebrities and influencers. The controversy has sparked questions: Why would Arab governments want to normalize relations with Israel? Could normalization put an end to the long-standing Arab-Israeli resentment? And what could this imply for Palestine?

This presidential visit comes after the U.A.E. became the first Gulf state to normalize relations with Israel under the United States-brokered Abraham Accords in 2020, followed by Bahrain and Morocco. Since the signing of the accords, economic and security ties have been forged between the two countries and about 200,000 Israelis have visited the United Arab Emirates. This wave of diplomatic normalization, following Egypt and Jordan’s signing of peace treaties with Israel after the 1973 Arab-Israeli war, broke with the Arab League’s long-standing consensus of refusing to recognize the state of Israel unless a Palestinian state is established with a capital in east Jerusalem.

Why would the U.A.E want to normalize relations with Israel? Emirati authorities sought out the assistance of Israeli companies, such as aerial data collection company Airobotics, to secure  Dubai’s Expo 2020. Various reports indicate that there is a remarkable expansion of cooperation between Emirati and Israeli authorities — not only at the political, economic and cultural levels, but also at the military level. This military cooperation could open a door for the U.A.E. to form a powerful regional alliance that could support its war efforts in Yemen alongside Saudi Arabia. The war is being waged against the Houthis, who are supported by Iran, the major regional opponent of Israel. Such an alliance comes at a critical time for the U.A.E., which declared, for the third time in January 2022, its interception of ballistic missiles fired by the Houthis.

Not only can the nation benefit from the support of a powerful regional ally such as Israel, but an expansion of diplomacy on political, economic, military and cultural levels can help to soften the international image of the U.A.E. as it aspires for leadership in the Middle East. It is possible that the U.A.E. is working to appear as a pragmatic, peace-loving state, taking on the role of the regional peace-maker, a role that, for long, was regionally assumed by Egypt since it became the first Arab country to sign a peace treaty with Israel in 1979.

Furthermore, the Emirati organization of the Expo world fair, and especially its invitation of Israel, could be understood as a strategy to divert attention from the violations of human rights by Emirati authorities. In September of 2021, the European Parliament issued a decision to boycott the event, condemning its violations of human rights and noting its worrying practice of detaining civil activists. Similarly, Human Rights Watch criticized the U.A.E. for trying to promote a progressive image of openness and tolerance while violating human rights domestically, especially the labor rights of expatriates.

Is the Arab-Israeli long-standing resentment over?

The decision by the Emirati authorities to invite Israel has revitalized the Arab-Israeli resentment in the Arab public sphere. The general animosity towards the Israeli occupation has long been integrated into a sense of national Arab identity. The Arab-Israeli hostility started in 1948, with the establishement of the state of Israel on Palestinian land, which drove Arab neigbouring countries into several conflicts against Israel. For decades, Arab youth have been socialized to stand in solidarity with the Palestinian nation and to perceive Israel as a settler state.

The development of media facilitating the transmission of art to the Arab public played a major role in the socialization of Arabs. Resentment towards Israel has been cultivated through music, cinema and literature across the Arab nations that defended the Palestinian cause, especially during periods of elevated tension between and during Arab-Israeli wars in 1956 and 1973. All of this fueled Arab-Israeli resentment through the years. This hostility has even been  exacerbated by extremist groups in the Middle East — especially the Islamic Jihad group in Egypt — to the extent that the signing of the Egyptian-Israeli peace treaty in 1979 by the Egyptian president Anwar El Sadat was one of the reasons that led to his assasination by Islamboli, a member of the Egyptian Islamic Jihad group.

Although public support for Palestine has been declining with new Arab generations that have not lived through the times of Arab-Israeli wars, grievances towards Israel resurged in May 2021 after the Israeli attacks on Gaza and on the Mosque of Al-Aqsa in Jerusalem. The forced displacement of the Palestinian residents of Al Sheikh Jarrah district by Israeli authorities also ignited public outrage in Arab nations.

A similar resentment resurfaced in reaction to the celebration of the Israeli National day at Expo Dubai. Palestinian groups called for a boycott of Expo Dubai and many pro-Palestine activists and social media influencers across the Arab world joined in to express their support for a boycott. Prominent social media figures have denounced Expo Dubai, criticizing it of celebrating the occupation and the violation of Palestinian human rights. According to Boycott, Divestment, Sanctions (BDS), one of the largest Palestinian organizations advocating for equal rights for Palestinians, the U.A.E. is helping the “apartheid” Israeli regime to “normalize and whitewash its oppression of Palestinians”.

What does the future hold for Palestine?

The situation of tension persists between Arab governments that hope to normalize relations with Israel and the Arab public that rejects these new diplomatic ties. Now that Israel has found new allies from within the Arab World that it had for long tried to penetrate, it is possible that more Arab States will join the U.A.E. in establishing political ties with Israel, ushering a new era that would leave behind the long-standing Arab-Israeli resentment.

With the persisting instability in Yemen and the uncertainty surrounding the Iranian nuclear deal, Saudi Arabia could be the next Arab state to normalize ties with Israel, increasingly reducing Palestinians’ opportunities for political support and leverage. With more Arab states recognizing the state of Israel and normalizing ties with it, the possibility of reestablishing a Palestinian state declines and is replaced by a gradual shift towards a one Israeli state solution, one in which Palestinians would live as second-class citizens.