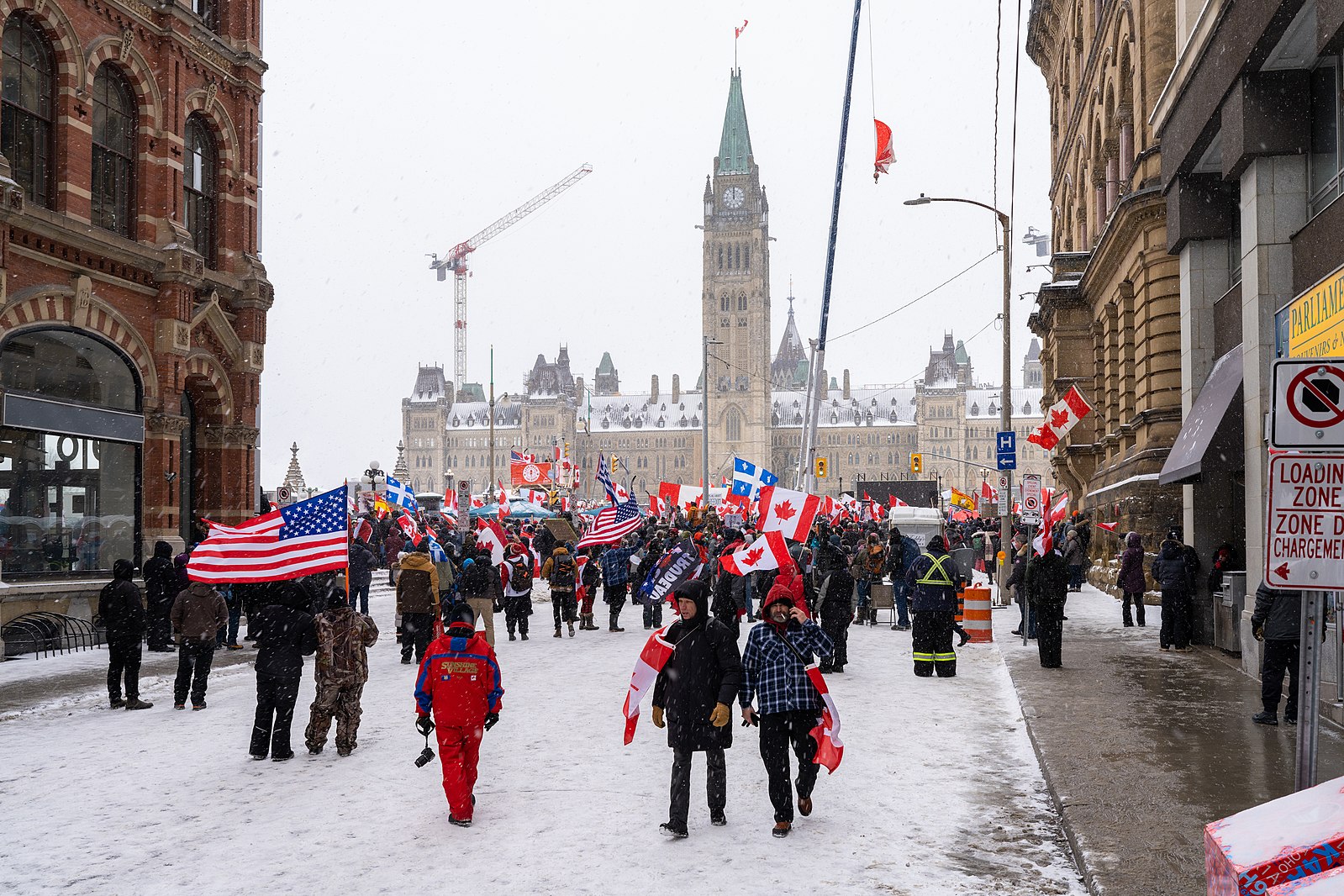 On February 14, 2022, Prime Minister Justin Trudeau invoked the Emergencies Act to end the protests that continue to afflict the city. This is the first time since the 1970 October Crisis that the Act (then “War Measures Act”) has been used. The Act is a 30-day measure that grants increased power to the federal government to assume legal jurisdiction from the provinces and municipalities across the country. In this case, the Act has only been invoked in Ottawa and other sites where protesters have set up blockades against critical infrastructure. What this means is that the federal government can now prohibit public assembly rights and require by law that trucking companies remove vehicles in the protests. However, the Canadian Civil Liberties Association (CCLA) has since announced that it will pursue a lawsuit to challenge the government’s use of the Act on the grounds that there is no legal justification and its use infringes on Canadian rights guaranteed by the Charter.

Early on, participants included conservative-leaning people, however, the convoy has since spun into a broader movement of far-right extremists from both Canada and abroad as some protestors have been spotted waiving the American Confederate flag and swastikas. However, the radical right is said to be scarce in Canada, largely lacking the ability to wreak the level of havoc exhibited in Ottawa. Some have argued that the unexpected wave of support toward the far-right demonstrated in Ottawa lends to a larger issue: that Canada is being pulled into America’s political culture of partisan war. Is this fear of Americanized polarisation a legitimate concern?

On February 13, 2022, an anonymous hacker group took down the U.S.-based GiveSendGo website that the Convoy group has been using to raise their multi-million-dollar campaign after GoFundMe canceled their page. The hack exposes an $8 million money trail at the base of the Convoy, revealing that half of their funding is coming from abroad – namely from Americans. Of the 92, 844 donations via the GiveSendGo crowdfunding platform, 56 percent came from the U.S. ($3.6 million), and 29 percent from Canada ($4.3 million). The large number of donations coming from the U.S. exhibits that foreign political interference in Canadian culture is real as Canadians march openly in the same rhythm with what has been dubbed American-style right-wing extremism.

In addition to exposing the origins of 92, 844 donations, the hackers replaced the homepage with “GiveSendGo IS NOW FROZEN” and redirected the website to GiveSendGone.wtf, where a clip from the Disney movie Frozen II pops up and reads:

“Attention GiveSendGo grifters and hatriots. You helped fund the January 6th insurrection in the U.S. You helped fund an insurrection in Ottawa. In fact, you are committed to funding anything that keeps the raging fire of misinformation going until it burns the world’s collective democracies down. On behalf of sane people worldwide who wish to continue living in a democracy, I am now telling you that GiveSendGo itself is now frozen”

GiveSendGo has become the go-to crowdfunding platform for extremists, hosting fundraisers for white supremacist groups such as the Proud Boys, anti-vaxers, and January 6th offenders.

“Up here in Canada, we kind of lied to ourselves,” says the anonymous hacktivist in an interview with the Guardian, “[but in reality] we have much more in common with our neighbors to the south than we wanted to admit to ourselves”

In addition to the wave of American money helping to fund the convoy, American-Republican politicians are also stepping into the ring. For example, one day after Trudeau invoked the Emergencies Act, Republican Rep. Dan Crenshaw of Texas tweeted to Canadian truckers to come to the U.S. to fill the trucker shortage through the work visa program. Additionally, Republican Rep. Yvette Herrell of New Mexico has promised to introduce legislation that would grant temporary asylum to convoy protestors.

“Just as we provide asylum for political prisoners, we should do the same for truckers who have been subjected to violence, had their property confiscated, and their bank accounts frozen by a government that is quickly becoming the embarrassment of the free world” says Harrell in a tweet.

Further, the U.S. Department of Homeland Security has reported threats of copycat protest demonstrations that could potentially take place in Washington D.C., near the date of President Joe Biden’s State of the Union address.

As Canada’s convoy protests continue amidst police crackdowns, Republican-American politicians add fuel to the fire from abroad. That is to say, Canada faces a legitimate concern that it is being pulled into the belly of the American culture wars.

That being said, in addition to police crackdowns on the protests, the federal government is requiring crowdfunding platforms and payment service providers to register with the Financial Transactions and Reports Analysis Centre of Canada (FINTRACT) to track money laundering to the illegal blockades. This could help to lessen the extent of American influence firing up the convoy’s activities. However, even when the convoy occupation comes to an end, Canada will find itself in an uphill battle to defend against becoming a long-term object of American polarisation.