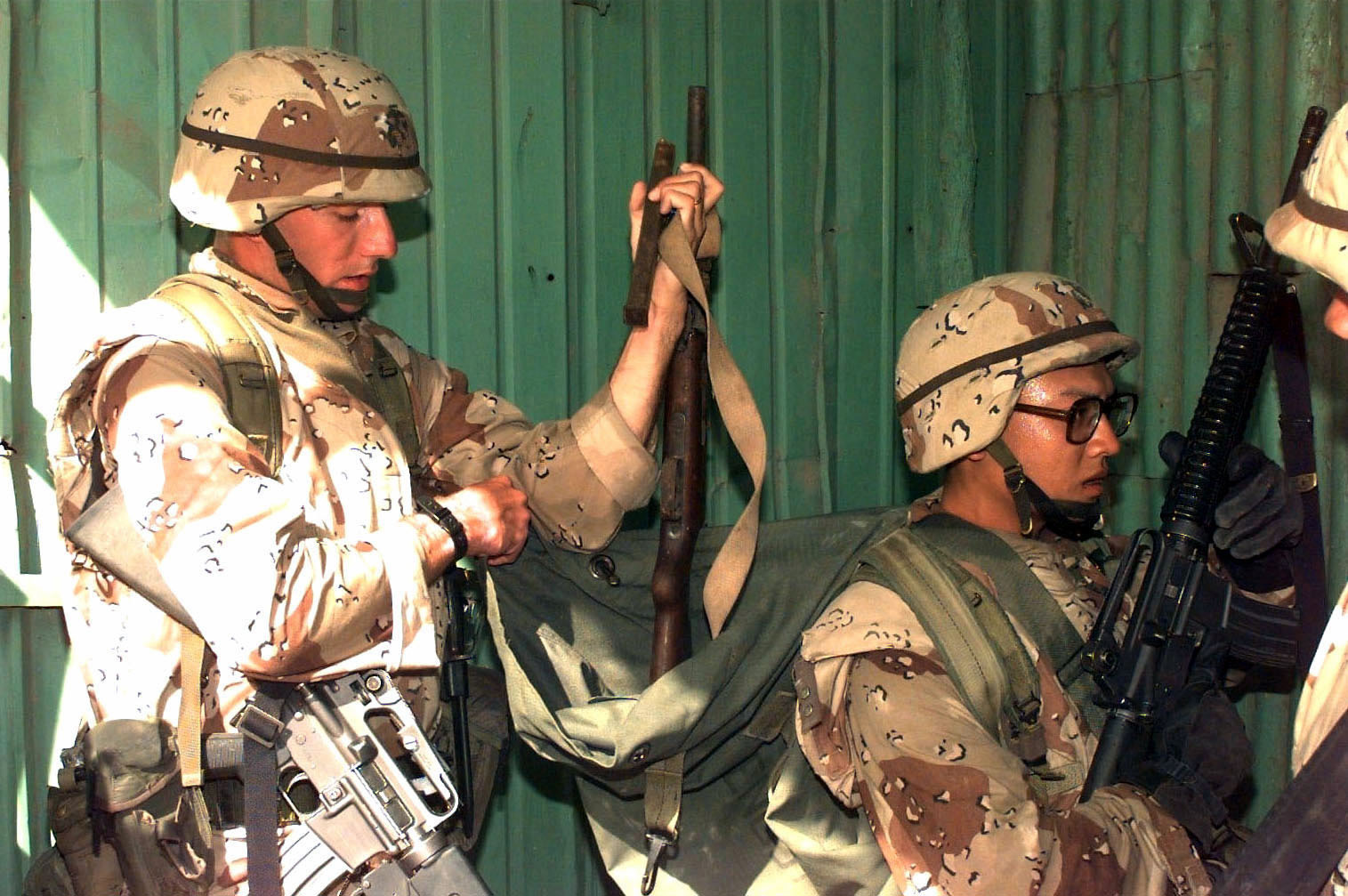 A Push to Re-Engage in Somalia:

Throughout early March, US military officials have urged both the Senate and President Biden to redeploy military forces in Somalia. The recommendation comes 14 months after a withdrawal made in order to operate Somalian initiatives from afar. Currently, the American military “commutes” to their work in Somalia, periodically engaging before returning to bases in either Kenya or Djibouti. Republican Senators have endorsed the move to redeploy in Somalia, stating that the current arrangement has resulted in a security backslide and the ability for the terrorist group al-Shabaab to surge.

The push from army officials to directly re-engage in Somalia seems to be part of a new pattern from the Biden administration to increase armed pressures against al-Shabaab forces. Drone strikes and the wish to redeploy American forces in Somalia seem to run in tandem with US sanctions against Somali delayed elections; echoing the Bush-era tendencies to draw causal connections between Somali political stability and militant Islamism.

The emergence of the War on Terror instilled within the US a fear that equated the internal dynamics of state-failure with the evaporation of an American-led post-Cold War vision of a “New World Order’’. What Dr. Harry Verhoeven, a Senior Adviser to the European Institute of Peace, has coined the “Orthodox Failed States Narrative’’ is a doctrine that represents failed states as international impurities that ought to be eradicated before liberal democracy may finally flourish. The US’ international policy became increasingly inspired by the Orthodox Failed States Narrative during the outbreak of the War on Terror. Washington’s attitudes towards the relationship between failed states and global liberal democracy was demonstrated in its growing willingness to militarily intervene within seemingly “anarchical” states with a growing Muslim influence. Today, the attitudes behind the Biden administration’s recent convictions to escalate US military presence in Somalia exemplifies the lingering compulsion to apply armed pressure on radical Muslim militias, rather than resorting to strategies focused foremost on the security of Somali people and the stability of the Somali state.

The Orthodox Failed State Narrative assumes that legitimate power derives from the nation-state; seldom exploring how local communities and non-state forms of governance may possess the potential to hold a type of authority that may be as legitimate as classical governments. Following this rationale, it is hardly surprising that many War on Terror policies implicity posit that where there is no state, political ‘‘black holes’’ are abundant and waiting to be filled with terrorists, religious zealots and organized crime. However, Washington’s determinism about the anarchy-terrorism link is deeply unhelpful in understanding Somalia’s true issues regarding state-building. Historically, the US’ particular “allergic reaction” to potential terrorist uprisings have resulted in self-fulfilling prophecies that have led to further radicalization.  In fact, American instincts to hold interventions intended to prevent a potential surge in terrorism have, in the past, resulted in escalations in Somalia’s militant Islamism.

Throughout the 20th century, Somalia had been stateless. This led the Somali capital, Mogadishu, to be de facto operated by a loose network of warlords. During the early 2000s, the warlord government was covertly hired by the CIA in order hunt down what the US it identified as radical Muslim clerics who were suspected for sheltering terrorists. As the CIA/warlord-instigated violence increased, many of the religious men who managed local Islamic Courts began to organize in order to defend themselves. In 2005-6, a broad coalition of forces in Mogadishu known as the Union of Islamic Courts (UIC) managed to uproot the warlord presence in the Somali capital, establishing political authority under the banner of Islam. Over time, these Islamic courts gained legitimacy because of their ability to create semblances of order in the midst of political chaos. It was the intent of the UIC to foster a united Somalia and garner the alliship of its geographical neighbour, Ethiopia.

Instead, fearing a potential surge in Somali militant Islamism, Washington sponsored Ethiopia to conduct an armed intervention in Somalia in 2006. However, the US’ polarizing rhetoric and policies created violent radicalism where very little existed before. The invasion radicalized many Somalis, prompting the UIC to declare an international mujahideen to join the fighting, giving rise to the present-day al-Shabaab.

“We Are Not Going to Simply Drone the Al-Shabaab Problem to Death”:

Washington’s approach to Somali state-building and “solving” the al-Shabaab problem is twofold: opting for a disciplinarian approach to both Somali terrorism and state corruption. Although the US has in the past committed to bolstering the Somali government’s state-building agenda, Washington’s employed techniques have only seemed to have accentuate the issues. The Biden administration possesses the privilege of hindsight when analyzing the potential strategic gains military redeployment in Somalia offers. Not only did the Bush administration’s sponsorship of the Ethiopian invasion of Somalia contribute to further Somali militarization, but so too did the Trump administration’s drastic increase in drone strikes. From 2016-2019, President Trump conducted 202 of the 267 US drone strikes ever operated in Somalia. The Trump administration’s intensification of drone strikes did not seem to dissuade al-Shabaab hostilities. On the contrary, attacks conducted by al-Shabaab fighters targeting Somali civilians seemed to correspond with Trump’s uptick in drone assaults.

However, it does not seem that the Biden administration has been advancing with proceedings in Somalia with state-building in mind. During the Trump era, air strikes and ground offensives prevented Somalia from establishing lasting security and legitimate governance due to the ongoing warfare. A similar case is illustrated during the Bush administration in 2006, where the desire to uproot a militant Islamist threat only produced further insecurity. The Biden administration possesses the potential to implement the lessons that Washington has learned over the past two decades into present-day policy, but current developments seem to indicate that the US has stepped away from political solutions to Somali state-building.

There have been five drone strikes issued against al-Shabaab aggressors under the Biden administration. The most recent drone strike, conducted on February 22nd, 2022, ran parallel to the announced sanctions in consequence of Somali election delays. The restrictions were announced after Somali leaders delayed national elections to March 15, stretching the current parliamentary session a year past its scheduled expiry date. In a statement issued by the US Department of State on Friday, sanctions against Somalia were placed in order “to promote accountability for their obstructionist actions.” The overlap between a political condemnation and a military engagement is timely, as it is suggestive of the current Administration’s broader approach to statelessness and terrorism in Somalia.

The Biden administration’s policies towards the war in Somalia still carry within them the deterministic link between anarchy and terrorism that Verhoeven asserts was present in American politics during the outbreak of the War on Terror. Military and political officials continue to draw relationships between Somali democratic health and a rising terrorist threat. According to Gen. Stephen Townsend, the head of the United States Africa Command (AFRICOM), “I think particularly in Somalia, al-Shabab is taking advantage of the political leadership there being distracted by a prolonged political crisis …While that’s going on, the pressure is off al-Shabab ”. These types of statements presuppose that the remedy to the situation in Somalia is one of elimination; that Somali democracy may only thrive after the erasure of both the al-Shabaab and Somali government corruption. This attitude carries within it the spirit of  the Orthodox Failed State Narrative, reinforcing the lingering American fear of African political “black holes” and resorting to antagonistic measures in hopes of solving them.

As Rep. Ilhan Omar wrote in a letter to President Biden concerning an airstrike the US carried out in July 2021 in Somalia: “It is critical that we realize we are not going to simply drone the al-Shabaab problem to death”. If the US is truly committed to bolstering Somalia’s state-building agenda, then the Biden administration must first recognize the historic ineffectiveness of inflammatory military engagement and punitive political action on Somalia. Instead, the analysis must shift in order to reinterpret the war in Somalia as an inherent political issue, where the security of Somali people and the stability of the Somali state is the primary concern.

Featured image by Expert Infantry and obtained via Flickr under a  Creative Commons Attribution 2.0 Generic license