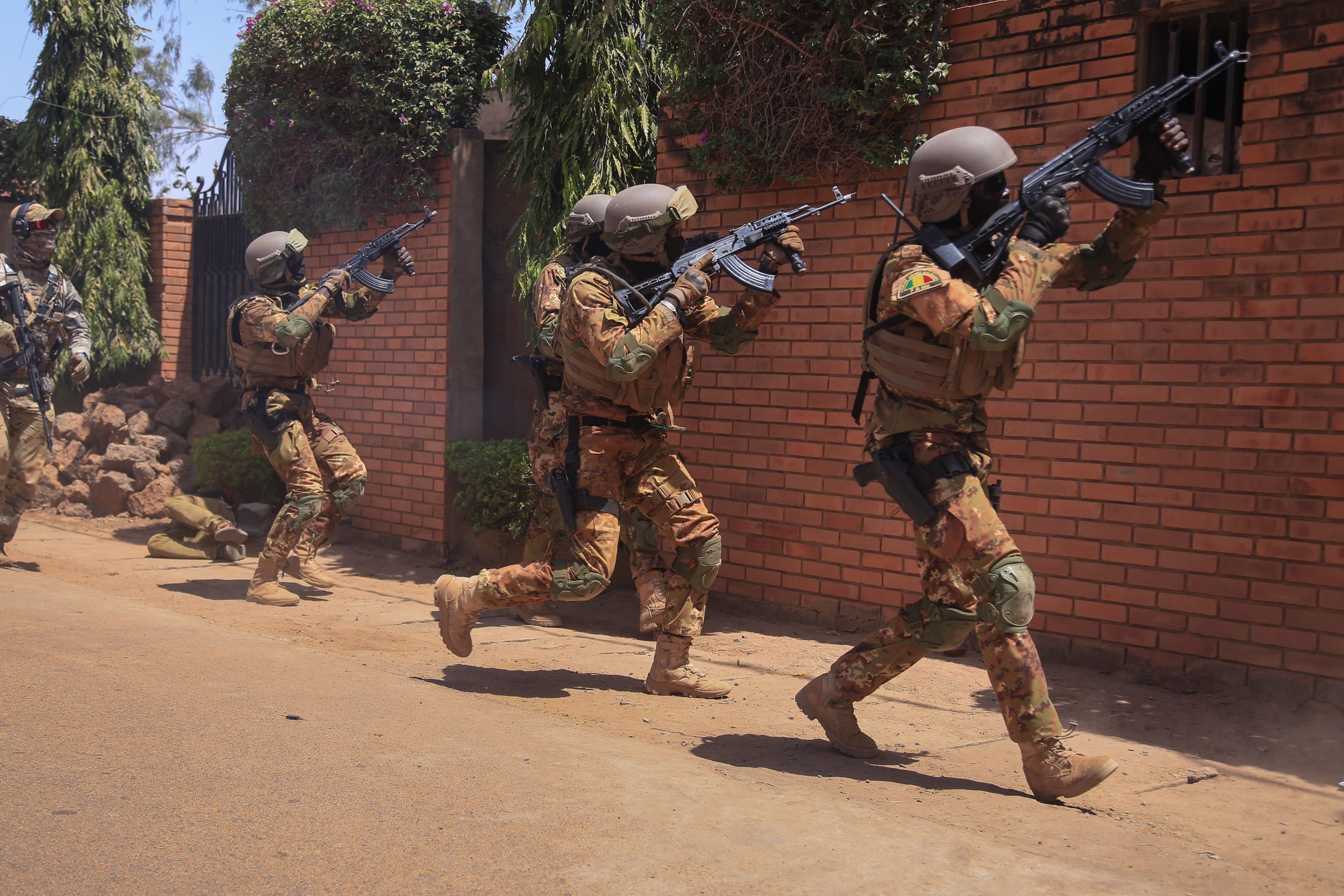 As a shocked world watches his war unfold in Ukraine, Putin has quietly been using the Wagner Group – an infamous contingent of Russian mercenaries – to penetrate Africa and assert Moscow’s presence abroad. Their expansion into the region indicates Putin’s growing reliance on irregular means in an attempt to collect allies on the continent and rebuff the West. Their newest addition: Mali.

On February 17, 2022, France and its European allies announced that they would be withdrawing their troops from Mali following the failure to contain a persistent Islamist insurgency during a nearly decade-long counterinsurgency campaign. The opening they provided was soon filled by Wagner.

A 2012 military coup followed by the loss of nearly all its northern territory to a coalition of ethnic and Islamist fighters – al-Qaeda affiliates among them – saw the Malian transitional government appeal to their former colonial rulers for intervention.

France responded by executing air strikes and deploying ground troops, soon initiating a region-wide, multi-national counterterrorism effort to prevent the spread of jihadists to neighbouring countries from where they could launch attacks in West Africa and, Western officials claimed, Europe.

Almost a decade later, “Operation Barkhane” as it was named, despite significant troop contributions from the UN, failed to halt the spread of Islamist militancy across the Sahel, further straining relations between Mali and its Western counterparts.

In the context of a worsening security crisis, growing resentment over perceived French neo-colonialism, and a desire to ‘coup-proof’ its regime, the Malian government soured on the West, expelling the country’s French ambassador – to the pleasure of local Malians – and demanding the immediate withdrawal of French troops from the country.

In steps the Wagner Group, a Russian state-backed private military company (PMC) with direct links to the Kremlin as well as a history of human rights abuses.

The group, while nominally a private organization, functions as a tool of Moscow’s foreign policy strategy and has embedded itself in conflict zones across the world, particularly in the Middle East and Africa. Their presence in Mali adds to an extensive list of foreign engagements that includes Libya, Sudan, Mozambique, Yemen, the Central African Republic, and Syria, where they have been instrumental in sustaining the embattled Assad regime.

Despite extensive deployments abroad, the Wagner group sports a mixed track record on combat performance. Hampered by poor knowledge of the local terrain and an inability to understand both the insurgents they were fighting and the local forces with whom they had to collaborate, Wagner retreated from counterinsurgency operations in Mozambique in November 2019 – a mere two months after arriving in the country.

So far, the roughly 2000 mercenaries in the Central African Republic have been unable to defeat the rebel forces trying to supplant the local regime they have been hired to protect, while about 1000 Wagner fighters operating in Libya, where they support rebel leader Khalifa Haftar, have failed to overthrow the unrecognized government.

One of the main reasons that Russia uses hired guns instead of conventional forces is plausible deniability. Not only are its fighters hard to identify since they don’t don official armed forces garb, the Wagner group’s ostensible independence from the state means any actions they take that would invite scrutiny – like attacking American troops in Syria or violating human rights in Africa – can be easily disavowed as the misadventures of an autonomous organization.

What’s more, as a group that doesn’t officially exist – Russia outlaws mercenary activities – Wagner fighters are also not reflected in government casualty reports. This is politically expedient for a country that wants to avoid domestic political upheaval over the human cost of conflict.

In a strategy reminiscent of the Cold War, Putin has sought to carve out spheres of influence in Eastern Europe, the Middle East, and Africa, trying to restore Russia’s great power status following the 1991 collapse of the Soviet Union.

By targeting weak regimes in unstable countries – often rich in natural resources – and requesting access to its airbases and ports, the Wagner Group is creating a dependence on Moscow’s military assets. The approach is strikingly similar to China’s mammoth foreign policy project, the Belt and Road initiative, which, according to the West, leverages economic might to similarly create African dependencies on Chinese state assets.

Wagner embodies Putin’s opposition to conventional statecraft approaches in Africa – e.g. economic investment and trade – and demonstrates a clear preference for asymmetric means of spreading Russia’s influence. Furthermore, despite a string of military failures, the strategy seems to be working.

Just 28 of Africa’s 54 countries voted to condemn Putin’s invasion of Ukraine, with nearly all of those, besides Eritrea, either abstaining or not submitting a vote altogether. This may be explainable along traditional ideological fault lines – the majority of states that did not vote or abstained were authoritarian or hybrid regimes. However, at least three countries – Mali, Mozambique, and the Central African Republic – share close military ties to Russia and currently host, or have hosted, Wagner mercenaries.

How the West should respond

Fundamentally, Wagner’s operations indicate that Moscow is interested in undermining post-colonial relations between Africa and the West.

Western countermeasures should thus include promoting transparency over Wagner’s abuses and poor performance at combating insurgency in Africa. Additionally, Western countries should strengthen diplomatic ties to the region and forge closer relations with civil society groups in a manner that benefits all parties involved  – not just the West.

Simultaneously, the West must continue to promote democracy and fight against Islamist violence as buffers to conditions of insecurity and authoritarianism – a deadly combination that Russia has exploited – to the disadvantage of African civilians.

Featured image by​​ US Africa Command and obtained via Flickr under a CC BY 2.0 licence.