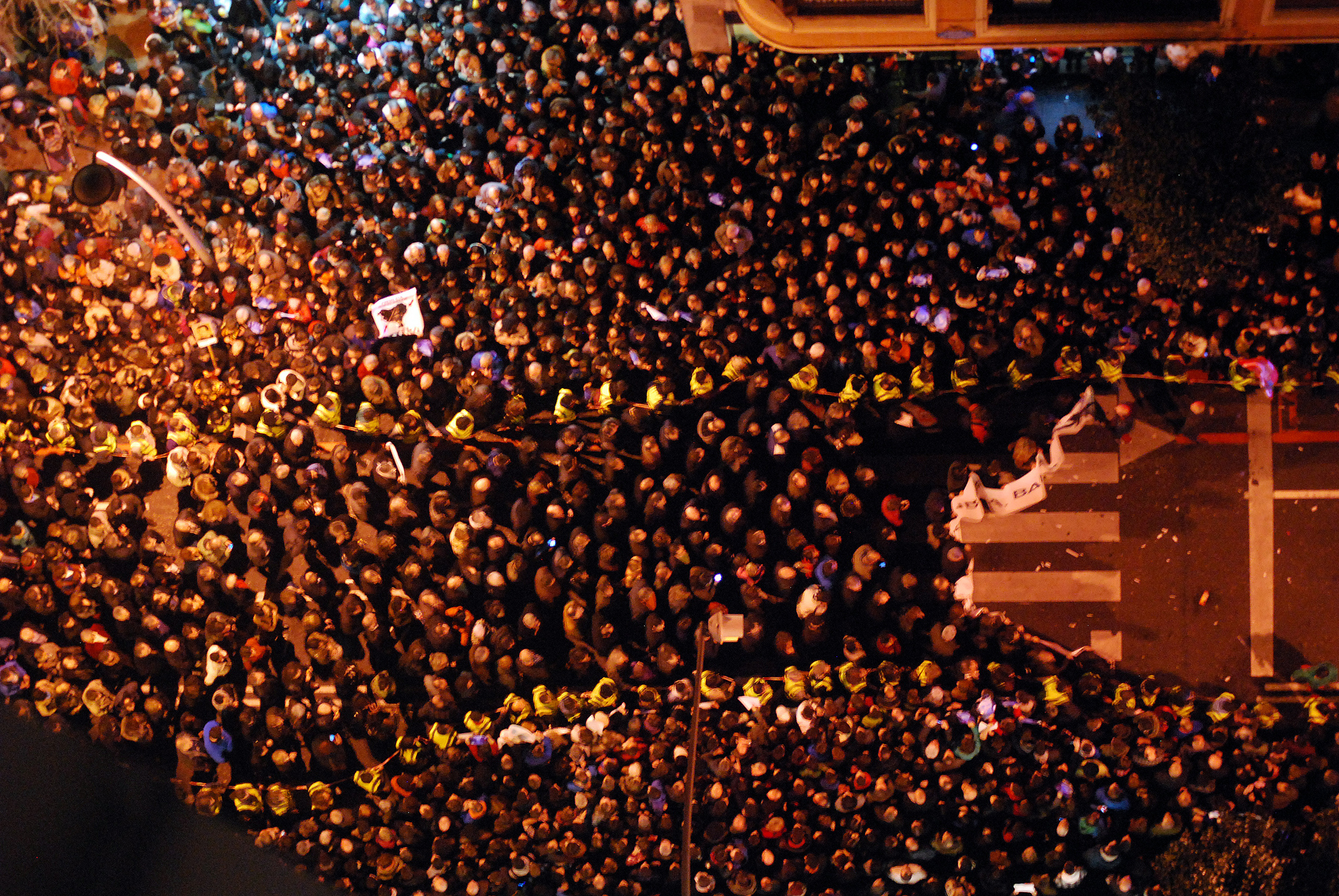 The first undesirable aspect in the creation of a world state is articulated by Jean-Jacques Rousseau in his article A Lasting Peace through the Federation of Europe, in which he speaks to the unsavoury process that the creation of a world state would entail. Rousseau proposes that, even if a world state would be beneficial at its end product, the path needed to establish this system would produce so much harm that it would outweigh any potential positive aspects of its achievement. [1] Rousseau suggests that the creation of a world state would necessarily involve a single state violently conquering all other states in order to force them into subjugation.  Similarly, Immanuel Kant outlines the undesirable product of a world state. Kant presents the argument that a world state would quickly descend into an inescapable global tyranny, hindering the securing of human rights and autonomy rather than facilitating it. [2] John Rawls further supports this claim, stating firmly “here I follow Kant’s lead in Perpetual Peace (1795) in thinking that a world government…would either be a global despotism or else would rule over a fragile empire torn by frequent civil strife as various regions and peoples tried to gain their political freedom and autonomy.” [3]

The aforementioned thinkers have an emphatically negative view of a world state. I would contend, however, that these negative views are all due to a misconception of the nature and scope of a potential world state. Rousseau’s critique involves him making a sweeping assumption that the establishment of a world state would necessarily involve violent measures, with one unitary state dominating all others. Yet it need not occur in this manner. Rather, for a world state to be considered even somewhat legitimate, it would have to be founded on the consent of all states, or at the very least, decided upon by a representative form of democracy. This is the closest we can achieve to true legitimacy in a domestic political setting, and this ideal remains true at the international level. The legitimacy of governing institutions lies with the governed. The decision to establish a world state would thus need to be unanimous.

While this consensus may at first seem impossible, this error is due to the second misconception of a world state – that it would be universal in scope. This common yet erroneous conception holds that a world state would have ultimate authority over all states, in every conceivable way. This would not necessarily be the case. Rather, the actual enforceable powers of a world state, in response to both the critiques of Rawls and Kant, would be better utilized as restricted to certain domains of collective of action that is global by nature. These domains would include, for example, security (such as in the limitations or elimination of Weapons of Mass Destruction) and environmental security (combating climate change). There would thus still be high degrees of internal autonomy and sovereignty within states for domestic matters, and this condition would be what allows states to even consider the creation of a world state. As discussed in the second article of this series, states already concede some sovereignty in the international system. It would, therefore, appear quite plausible that they would concede some more to an international body.  In this formulation, the proposed flaws explained by the above thinkers no longer apply.

In terms of the potential benefits in creating a world state, this article will discuss two of the central ideas as well as the relevant proponents of the arguments in order to demonstrate the desirable nature of the project: the human rights component, and the economic protection component.

First, a well-established world state has the capacity to be the ultimate champion and keeper of human rights. As it currently stands, the international system remains caught between two competing, foundational norms: the protection of human rights and the respecting of state sovereignty. While the human rights regime has become much more expansive and normatively accepted since the end of the Second World War, state sovereignty remains a crucial barrier to the legitimate capacity of the international community in preventing human rights abuses. This is because some states maintain that what occurs inside their borders is purely their own concern, and at no point should other states have the right to intervene – a contentious proposition, to say the least. Does this mean that the international community can never have a legitimate basis in acting to protect human rights within state boundaries?

As a response to this dilemma, Charles Beitz, in his article, Human Rights as a Common Concern, proposes that we should consider the protection of human rights a ‘common concern’ internationally, so that, accordingly, there may be certain measures that can be legitimately taken to ensure of their protection. The most important feature of Beitz’s theory is that it is a two-level model, stating that: 1. states are primarily responsible for ensuring the protection of human rights within their borders, but that, 2. if the state fails in providing human rights, the international community has the legitimate right to intervene, thereby overruling the norm of state sovereignty. [4] While this may seem like an adequate system, a pertinent issue is that this requires a commitment to a state-centric approach in maintaining human rights, as states would be its primary providers. This poses an issue as, in many cases, such as when a state system lacks the appropriate reach to ensure of this, a grey zone of domestic governance is created in which human rights violations often go overlooked. Although it may seem that in these situations other states would have the capacity to legitimately intervene, this is not the case, as Beitz’s model only applies when a state is unwilling to ensure of the provision of human rights to its citizens, not when they cannot. This type of scenario begs the question of upon whom the burden of responsibility falls. The question then becomes: does the project of protecting human rights require unitary state action?

I would argue that no, unitary state action is not a necessary part of protecting human rights. Instead, the existing problems with competing norms can be solved by the creation of a world state. Under the oversight of a world state with ultimate arbiter authority, individual states would immediately cede some of their sovereignty to ensure the protection of human rights within their territories. This would immediately solve the problem of inaction in human rights violations due to lack of state capacity or willingness to act. The authority to intervene would come in the form of a “stamp of approval,” determined on a case-by-case basis by the international community. This would effectively circumvent the aforementioned issue of competing norms. Thus, the protection of human rights would be facilitated by the creation of a world state due to the creation of a legitimate overarching body to legitimate international action.

The second significant potential benefit of a world state would be the economic protection of all states, one that is evidently more pragmatic and less ideologically-driven than the first. This argument is best illustrated in Philip Petit’s article, A Republican Law of Peoples. Petit notes that International Institutions (IIs) and International Organizations (IOs) such as the IMF, WTO, and the World Bank often abuse their positions of authority relative to weaker states. As he states, “one of the ways that powerful states dominate weak states is by ‘entrenching and institutionalizing’ their dominant position through unfair international social structures in areas such as trade.” [5] Some have suggested, as a solution to this problem, that states simply not participate in such institutions. Unfortunately, as is articulated by Kokaz, non-participation is often not an option for states. [6] Some states have no other choice but to consent in order to benefit at all from these institutions, a phenomenon known as a ‘Suasion Game’. In short, a Suasion Game normally involves two players: one stronger player with little interest in cooperating and one weaker with significant interest in cooperating, and a few other choices. Typically, the outcome of this situation is that the weaker actor must take what is on offer, or else it risks injuring its own interests even more. [7]

As is apparent by the above analysis of the scholarship, the current state system is one that propagates the exploitation of weaker states by stronger states. This is an issue that could quite easily be solved with the creation of a world state. As the liberal capitalist economic system encourages states to exploit local communities, smaller states that do not have the capacity to participate as intensely in the international economy often lose out. A supervisory body such as a world state could step in where necessary to protect local communities from being strong-armed by states with more financial sway, assuming that it treats all states equally. In this way, a world state has the potential to act as a protector of the weak states in a system, rather than one that dominates all states. Thus, a world state can help eliminate the exploitative power dynamic that exists between economically strong and weak states.

We can, therefore, see that, in addition to the arguments for the undesirability of a world state being insubstantial, the potential benefits of such a system, such as the protection of human rights and economically weak states, greatly outweigh the potential downfalls.

To speak more broadly regarding the topic, and as an overarching concluding note to this trilogy on the consideration of a world state, I would like to note that the goal of this series has not simply been to criticize and dismiss the individual arguments against the creation of a world state purely for the sake of being controversial. Rather, the broader ambition was to demonstrate that there are feasible, attractive alternatives to existing methods of global governance. In an era where many of the problems that plague the world are ones that transcend state boundaries, global governance is needed more than ever. However, it is important to remember that global governance need not be how it is today. In analyzing the international system, we must be careful to not normatively validate it. After all, the way that the international state system looks currently is not necessarily how it ought to look. In other words, to propose a derivative on Hume’s Law: the ‘is’ should not limit the ‘ought’. We must constantly be on the lookout for better, more effective ways of addressing the problems that plague humanity. These solutions often come in packages that may surprise us but are indeed worth entertaining. A world state could very well be one of those packages.

1. Saint-Pierre, Charles Irénée Castel De, and Jean-Jacques Rousseau. A Lasting Peace through the Federation of Europe: And, the State of War. Translated by Charles Edwyn Vaughan. London: Constable and Company Limited, 1917.