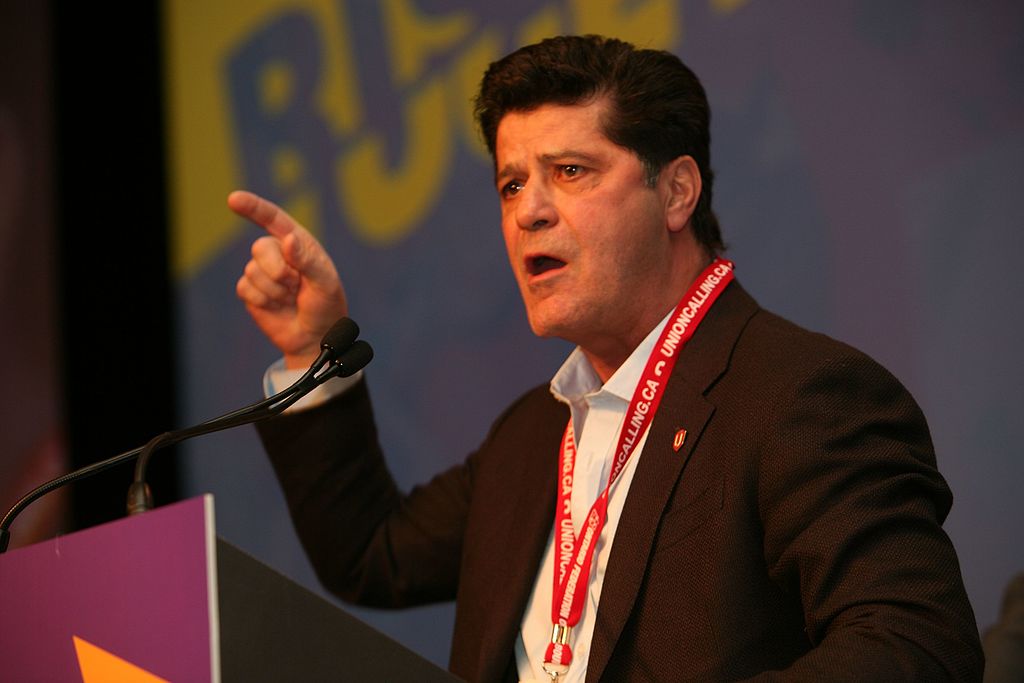 Unifor, which formed in 2013 through the merging of the Canadian Auto Workers (CAW) and the Communications, Energy, and Paperworkers (CEP), is the largest private-sector union in Canada with a membership of over 300,000.

During his speech Trudeau highlighted the differences between his party and the Conservatives, reminding the audience of Stephen Harper’s record and reassuring them that he stands on the side of workers. Despite his pitch, Trudeau’s relationship with the labour movement has not been stellar, causing some to criticize the decision to give this platform and present himself as an ally.

Christo Availis, an expert on Canadian Labour History, argues this move demonstrates the unwillingness of Unifor’s leadership to act in solidarity with other unions. He notes that Unifor was accused and ordered to stop raiding the memberships of other unions belonging to the Canadian Labour Congress (CLC), but instead chose to leave the CLC.

Unifor’s exit from the CLC combined with their invitation and warm reception of Trudeau, a Prime Minister who is widely perceived to have attacked workers’ charter right to strike, could leave a sour taste in the mouth of other unions.

Trudeau started on good terms with labour promising improved relations, a seat at the bargaining table during NAFTA renegotiations, and repealing anti-union legislation passed by the Conservatives including Bills C-377 and C-525. Throughout his term, however, their relationship has had some rough patches.

In November of 2018 Trudeau’s government passed Bill C-89, back-to-work legislation ending Canada Post’s rotating strikes across the country. This was seen in the labour movement as a heavy-handed and even unconstitutional move. In 2015, the Supreme Court ruled that the right to strike is protected by the constitution.

This was a low point in their relationship, as the right to strike is considered valuable to the success of the labour movement and it sparked a number of actions across the country in support of the CUPW members who had been ordered back to work.

Deal with the Devil?

Trudeau’s decision to attend and speak at Unifor’s conference makes sense on multiple fronts for his reelection effort.

Recently the media has been dominated by stories regarding the SNC-Lavalin scandal, with much speculation regarding the political repercussions of the story. At the conference, Unifor’s President Jerry Dias downplayed the criticisms aimed at Trudeau, and Trudeau himself used the opportunity to support a  counter-narrative that his misconduct came from a genuine desire to save Canadian jobs, rather than corruption.

Further, this campaign stop has allowed Trudeau to present a new image of himself to the labour movement. Rather than the Prime Minister who broke CUPW’s strike, he got the chance to rebrand himself, proclaiming on Twitter that “together with @UniforCanada, we’ll keep defending workers’ rights, helping families, & respecting the important work they do.”

While this rhetoric may ring hollow to many, Trudeau’s courting of the labour movement could be successful given his party’s failure to remove the first-past-the-post (FPTP) electoral system.

Both Unifor and the Liberals share a common goal in this election cycle. Like Trudeau, Unifor’s leadership is hoping the Prime Minister is re-elected, keeping Scheer’s Conservatives out of power and avoiding a party that Dias called “disastrous for working-class people in Canada.”

Strategic voting is a feature of the first-past-the-post (FPTP) system, where voters abstain from voting for their preferred candidate and opt instead to vote for the candidate most likely to prevent their least favourite from winning.

Before merging with CEP to form Unifor, CAW endorsed Paul Martin in 2006 in an ill-fated attempt to prevent a Harper government. For the 2015 federal election, Unifor urged its members to vote strategically, supporting either NDP or Liberal candidates depending on which had the best chance of winning.

Dias acknowledged that the NDP are labour’s best ally among the 3 main parties, but that “if my choice is Stephen Harper or Justin Trudeau, then that’s a no-brainer.”  Unions that stood firm behind the NDP included the United Steelworkers (USW), United Food and Commercial Workers (UFCW), and the International Association of Machinists and Aerospace Workers (IAMAW).

Recently, Trudeau’s relationship with Unifor has been under scrutiny due to their presence on a panel involved with the process of allocating government funding to various media companies.

Scheer took issue with Unifor’s involvement as Unifor President Jerry Dias has made comments about working to make sure Andrew Scheer and the Conservative Party are kept out of power, going as far as calling the union Scheer’s “worst nightmare.”

While Trudeau may have been trying to move attention away from the SNC-Lavalin affair, cozying up to Unifor could be used as ammunition by the Conservative Party to prove the partisan nature of their presence on the media funding panel.

Considering the Prime Minister so recently legislated CUPW members back to work and other controversies such as Hamilton Liberal MP Bob Bratina shouting obscenities at USW members, it seems unlikely that Trudeau’s message at the conference will be enough to convince the labour movement that he is a real ally. That stated, due to the nature of FPTP and the prospect of having a Conservative government, it might not matter.