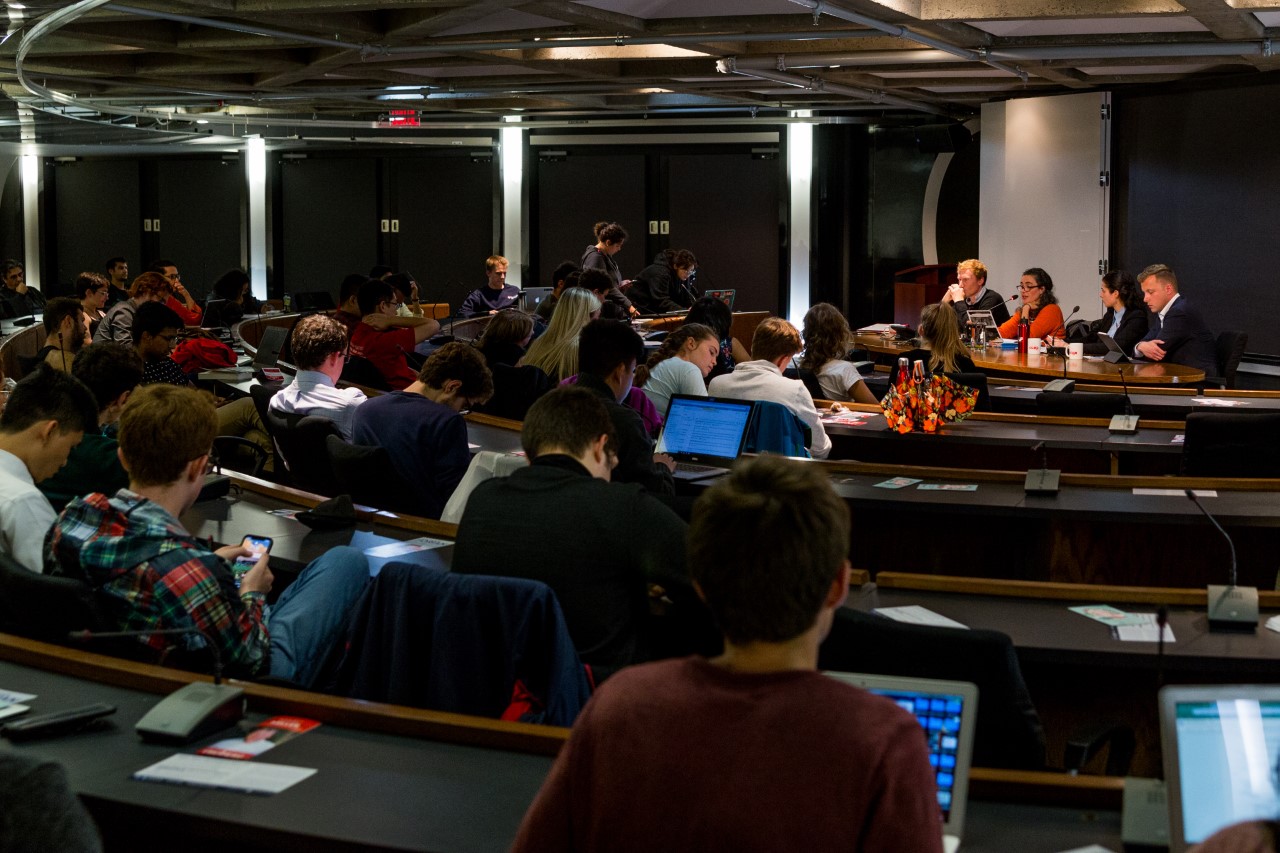 SSMU External Affairs did reach out to Bloc Québécois candidate Nadia Bourque, but did not get a response. SSMU External Affairs comments, “In general, it’s great that we were able to get all these candidates from the same riding. It’s so important to focus not just on the party leader, but also on how those larger orientations will affect our own communities. I think the attendees really understood that, judging by all the targeted questions we received and the general interest in this event!”

In opening statements, incumbent Liberal MP Marc Miller highlighted the increased salience of climate change as an election issue, stating that “the question four years ago was not about the environment, but it is now.” Miller alluded to the climate strike Friday, and commended the community for marching to demand better.

Miller acknowledged that the environment is a “very complex issue, and there is no one-stop solution.” Miller highlighted the Liberal’s $70 billion plan, multi-pronged in approach, which includes investing $1.8 million towards increasing McGill’s energy efficiency. Marc Miller also emphasized that putting a price on carbon is one of the most efficient ways to address climate change.

Liana Canton Cusmano, running for the Green Party, emphasized the environment as a priority, but “only because it is so intimately and intrinsically related to everything else.” Canton Cusmano squashed the narrative of the Greens as a single-issue party by stating, “The Green Party has a plan for everything, from revitalizing transport to agriculture to banning pipelines to reconciliation with Indigenous peoples, guaranteed livable income, lowering tuition, and transitioning away from fossil fuels.”

They emphasized the importance of voting beyond the two traditional choices of Liberal and Conservative, because “we are not going to find new solutions to problems we have always had by electing the same people who keep using the same strategies.”

Finally, Michael Forian, candidate for the Conservative Party, illustrated what has occurred over the past four years with Justin Trudeau, including “more debt, more deficit, and unfortunately, recently, dark makeup.” Forian highlighted the apparent lack of motivation during this election period, which the candidate attributes to the disappointment of the broken promises of Justin Trudeau over the past four years. Forian believes these broken promises contribute to the general cynicism Canadians feel over politics.

Forian stated that the Conservatives are championing low taxes and the ability to protect our environment. In a riding that is right on the St. Lawrence River, Forian cited concern over the Liberal’s dumping of raw sewage into the river – something the candidate claims will never happen under the Conservative government.

Q: Solving the climate crisis must be done at all levels, from national to local. In this riding, what environmental policies or values do you intend on implementing?

Sophie Thiébaut began the environmental topic by stating that the NDP declares a climate emergency and recognizes the greenhouse gas emission targets recommended by scientists with the goal of stabilizing the temperature. In addition, Thiébaut attempted to establish the NDP as the best party to enact the Green New Deal.

Conservatives “believe in the plan put forward to Canadians… in terms of being able to afford investments into green technology, carbon capture technology, technology that is actually going to [save money] to be invested into Canadians’ pockets at the end of the day,” alluding to the Liberals carbon tax, which the Conservatives openly criticize.

Along with local green initiatives, Canton Cusmano iterated that “concrete change starts with legislation and local initiatives to make these changes.”

Marc Miller justified the Liberal policy, stating, “there is no one-stop solution.” Miller also defended against Conservative jabs at the carbon tax, saying “The price on carbon is one element, but there are many more, like regulating methane, protecting oceans, doubling the national land we protect in this country, investments into green infrastructure, a public transit plan which includes electric buses, a low carbon fund.”

When asked about the Liberal government’s approval and purchase of the Trans Mountain Pipeline, Miller explained that “in a country as large as Canada, we cannot deny what the extraction industry contributes to the economy… we cannot leave our brothers and sisters in Alberta behind.” At the same time, pointed out the effect of petroleum extraction on emissions, which is why the party is investing all proceeds into green initiatives.

When asked about the potential of amending the Constitution to allow for Senate reform, Forian answered that “the Conservatives do have a desire for reform,” but that courts have already ruled on the difficulty of this issue, and many Canadians do not find Senate reform a priority.

Liberal Marc Miller rebutted, stating, “the Senate plays an extremely important role in a pluralist democracy…it acts as a chamber for sober-second thought.” Though the Senators were not elected, they are “great representatives of the people,” and all went through a “rigorous process” as the appointment process was meant to remove partisanship from the Senate.

Q: What is your stance on selling weapons to Saudi Arabia? What will your government do on this issue?

Following issues surrounding human rights in the Kingdom, such as the murder of Saudi journalist Jamal Khashoggi, Canadians have been hesitant to sell arms to Saudi Arabia. When asked, only two candidates chose to answer this question.

Liana Canton Cusmano stated directly, “the Green Party is opposed to selling weapons to Saudi Arabia.” Marc Miller, on the other hand, explains the Saudi weapons contract “was a contract that was negotiated directly by Stephen Harper. It is a contract that this government has respected. It is not something that necessarily makes us happy…. It is not an area without complexity.”

Following the release of multiple photos of Prime Minister Justin Trudeau wearing black and brown face, audience members questioned Miller about his knowledge of the incidents.

Miller began by apologizing to anyone who has seen the picture. Miller continues to reflect, saying, “if anything, I was guilty of silence, which, I think a lot of us are… It is a reflection for a lot of people in my generation”

“We’ve moved to an area where people doing the act do not get to judge whether it is racist or not or what was going on in his mind – it may be a demonstration of goodwill or good faith – but it is certainly not the test of who gets hurt, who gets injured, who suffers the effects of it.” Miller continues, “I do acknowledge the Prime Minister’s apology, but it is not up to me to forgive him.”

Conservative Forian is “running for the people who can’t get by. It’s the people who are doing everything right – going to school, working hard, paying their bills on time – but they still can’t get ahead in life.” The Conservative candidate stated that Canadians deserve a new government that “uses its citizens as drivers of prosperity, not sources of revenue.”

Liana Canton Cusmano emphasized that “we’re not going to solve problems that have come out of existing establishments by using the same old strategies and electing the same old people. We need something entirely new.”

Sophie Thiébaut said that the party believes in “working for our communities,” stating, “we have so many needs, we need someone to take leadership, to work for us.”

Finally, Marc Miller reflected on the Liberal’s previous term’s initiatives to close the widening income gap, such as the introduction of the Enhanced Canada Child Benefit, raising taxes on the one per cent, and cutting taxes on the middle class.

In the end, all four candidates drove home the importance of getting out to vote, regardless of which candidate or party you chose. On Monday, October 21st, remember to get out and vote!