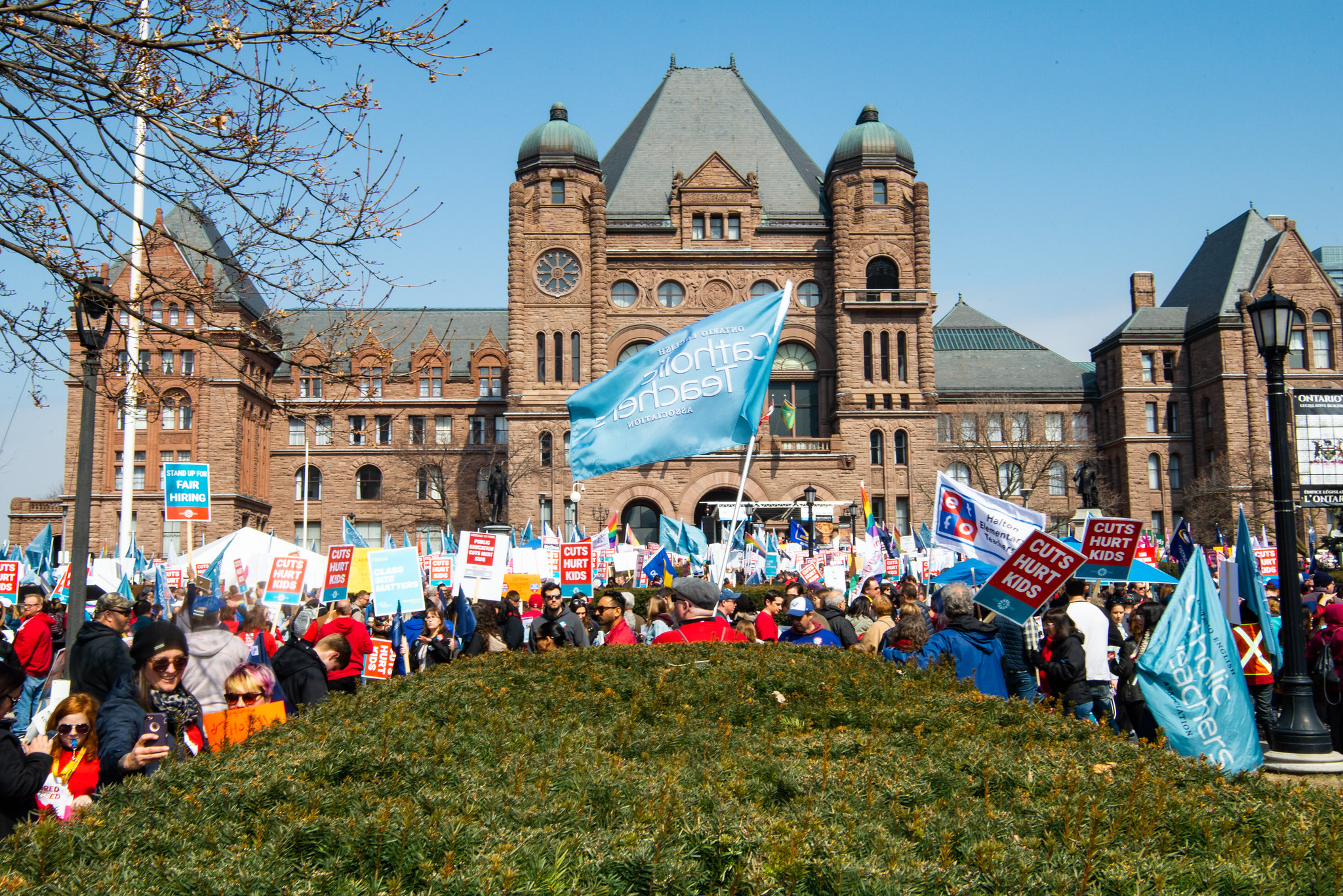 As COVID-19 has gripped the nation’s attention, Ontario’s tumultuous education landscape has seemingly drifted into the background. But behind the scenes of the pandemic, deals have been reached with every major teacher union. With COVID-19 as its primary focus, the government seems to be shifting to a calmer and more open-minded tone at the bargaining table.

Since the beginning of the 2019-20 school year, Ontario’s teacher unions have been at odds with the government, with strikes and withdrawals of service starting last November. In 2019, the Progressive Conservatives promised to increase the average class size from 22 to 28 and make four e-learning credits mandatory in secondary schools. Among other changes and cuts, these policies were the basis of the backlash faced by the government from the teacher unions, education advocacy groups, and students.

Following a successful negotiation with CUPE preceding the 2019 federal election, the Ontario government did not back down in negotiations with OSSTF, ETFO, OECTA, or AEFO, the four main federations representing teachers in the province.

Consequently, between November 2019 and March 2020, while many strikes occurred, including the first-ever provincial strike including all four major unions, very little ground was covered in negotiations.

How A Pandemic Has Changed Negotiations

While the public eye has been focused on the novel coronavirus, these deals have largely flown under the radar. Though the government has been persistent that their policies will not hurt students, it is important to note that they have made significant alterations to their initial plans. For instance, average secondary class sizes have moved from their initial target of 28 down to 23, only up by one from the previous Liberal government’s plan.

The Elementary Teachers’ Federation of Ontario also secured a four per cent benefit increase and settled with a continued one per cent salary raise per year. The government was previously unwilling to budge on this issue. While all of the details have not been released from each negotiation’s outcome, the Catholic teachers’ federation has revealed that they secured opt-out options for e-learning courses. They also confirmed a shift in the language of the government’s controversial change to Regulation 274: the hiring practice policy.

One reason for this sudden end to the gridlock between the government and unions may be the relieved pressure coming from the public.

Negotiations of this nature are heavily contentious and see both sides falling under great scrutiny. With the public distracted by COVID-19, the government is freer to make concessions without critique from their supporters, while unions are able to accept a deal without as much scrutiny from theirs.

This may be a testament to the traditional style of bargaining that the government committed to in October 2019. The public secondary union published each of their requests in an act of transparency, but the hyper-politicized nature of these negotiations may have had a part in plaguing the talks until March. With the public aware of what unions are asking for and the government defending its own policies, neither group had much incentive to budge from their positions.

With a recent poll finding that 83 per cent of Ontarians support Premier Ford’s handling of the pandemic response, these deals with teachers’ unions may fare well for the government come the next election. But Ontario’s teachers and their supporters will not soon forget the largest education strikes in Ontario’s history and the reasons behind them.