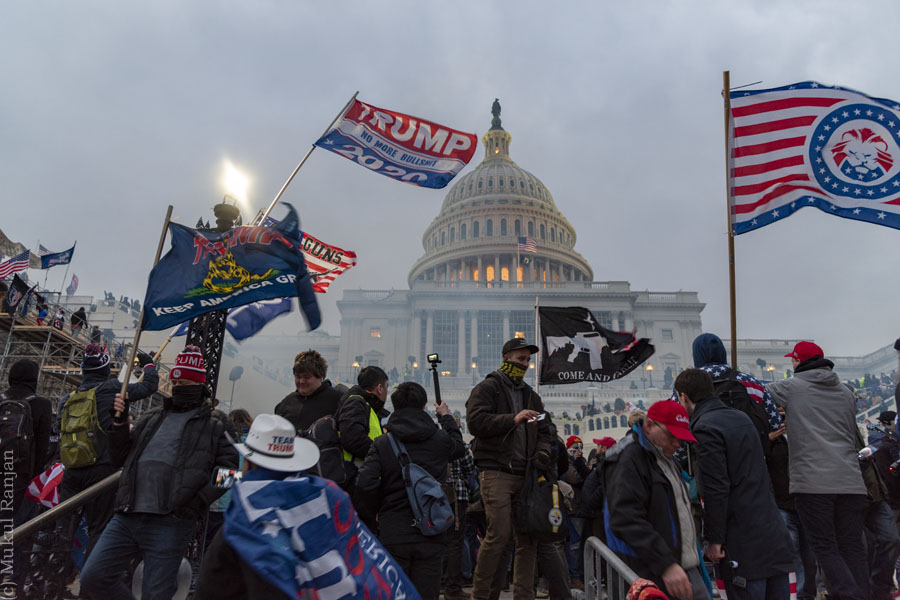 On January 6, 2021, a mob of insurrectionists, radicalized by years of lies, conspiracy theories, and inflammatory rhetoric, stormed the U.S. Capitol in an attempt to prevent the certification of the 2020 presidential election results.

In order to understand this spasm of political rage, one must consider the response of mainstream political culture. More specifically, the manner in which condemnations of the Capitol riot have been framed, and the rioters’ own justifications, reveal a deeper flaw in traditional American vernacular and political ideology.

Media outlets condemned the Capitol insurrection as an assault upon the institutions of American democracy. Their cries were echoed by many politicians, including then President-elect Biden who tweeted: “I call on President Trump to go on national television now to fulfill his oath and defend the Constitution by demanding an end to this siege.” His message is clear: these insurrectionists threaten America’s political institutions, and by extension, American democracy.

Other analysts have argued that this riot was a clash between those who believe in America’s institutions and those who do not. While the Capitol insurrectionists lack faith in the functionality of American institutions, the rioters continue to justify their actions as a defence of the Constitution, and express a desire for American institutions to function ‘correctly.’ Similarly, President Trump’s address to the rioters appealed to the notion of free elections as a value they were upholding. We have reason enough to doubt Trump’s sincerity, but the language which his supporters use reveal that they have not, at least in their own eyes, abandoned America’s institutions of their own accord. Rather, they feel their country has been stolen from them.

It is abundantly clear that the 2020 presidential election was not stolen. So it is then true that the Capitol insurrectionists were not defending the Constitution. Rather, they were in open defiance of this most fundamental American law. Yet the justification for such actions was an ostensible allegiance to the very institutions they were working to undermine. How did Trump supporters find themselves so deep in this delusion?

The United States was founded on a particular vision of liberalism. The fundamental values of individualism, limited government, and the defense of property became founding doctrines of ‘Americanism’. [1] These values were married to a mythos, a fetishization, of the American founding that conflated the Constitution with democracy itself. Even when the Constitution transgresses liberal democratic values, many Americans have come to accept these flaws as the grand plans of masterful political figures. [2]

When a nation defines legitimacy so narrowly, it cannot accept other ideological foundations as validly democratic and must view them as a threat. Most recently, some Americans have felt democracy is under attack by a legitimate election or a misguided MAGA mob. The Capitol insurrectionists have been labelled un-American, but their fear is similar to that of mainstream political culture. This obsession with constitutional legitimacy in American political culture has driven individuals to revolt against the Constitution, while basing their stance on the very process they seek to overturn.

Moreover, the more legally legitimate attempts to overturn the election results were also defended by Trump’s allies as a reasonable interpretation of the Constitution. In turn, those who condemn them cannot do so without reference to tired institutions and a 234-year-old quasi-democratic document. As if the fact that the majority of Americans voted for Biden was a mere afterthought. Of course, Americans do recognize the democratic value of the popular vote, but only when it complies with constitutional mandates. The outcome of the 2000 election, which saw Al Gore win the popular vote and lose the election after accepting an undemocratic ruling by the Supreme Court, demonstrates this. [3] This time, Americans could appeal to the Constitution without swimming against the current of a popular vote, but that will not always be the case.

Consider the following hypothetical. The year is 2017, thousands of people have descended on the Capitol demanding the dismissal of  Donald Trump’s election victory. Would this mob have a democratically legitimate claim? We certainly can think that their desire to see Hillary Clinton become President is the view of the majority of voters, even if we cannot know what those voters might think about their methods. How then do we weigh the democratic legitimacy of this claim against that of the Constitution, according to which Donald Trump is the victor? If American political discourse has become so deeply rooted in the existent, outdated Constitution that — even in times of open rebellion — it is appealed to by those who defy it, what hope is there for meaningful change in America? And will American democracy ever transcend the Constitution to become rooted in something more meaningful?

Photo obtained via Flickr under a CC BY-NC 2.0 license.