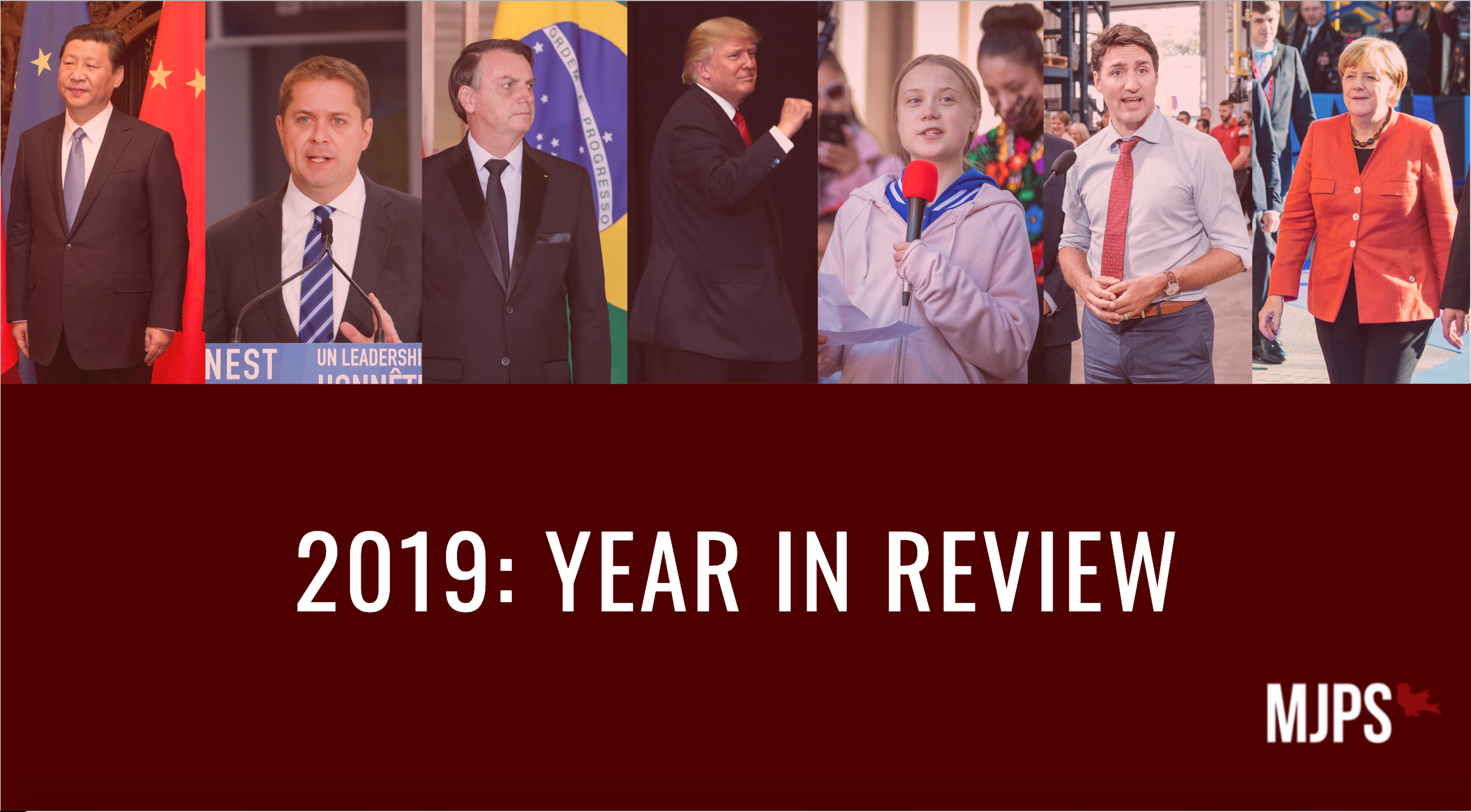 As the 2010s come to a close, MJPS has rounded up some of the most important political developments of 2019. This year, writers from McGill and beyond published four hundred articles on international relations, Canadian politics, comparative politics, and political theory.

The year kicked off with Canada’s key parliamentary symbol, Centre Block, closing for at least a decade. The building, which has housed the House of Commons and Senate since 1921, won’t open its doors to parliamentarians and the public again until at least the next decade. Perhaps mirroring the symbolic closing of this symbol of democracy, January brought continued global trending away from democracy and toward authoritarianism and populism.

January also saw the continuation of Yellow Vests protests in Canada, which were loosely inspired by the Gilets Jaunes movement which challenged Macron’s rising taxation in France. While the nationalist iteration of the Yellow Vest Movement raged on in Canada and nationalism took flight elsewhere around the world, US Senator and Presidential candidate Bernie Sanders teamed up with Greek intellectual and parliamentarian Yanis Varoufakis and others to create a “Progressive International” to combat right-wing nationalism around the world. In another move opposed to increasing inward nationalism. Germany and France signed the Treaty of Aachen, a commitment to deepen cooperation between the two countries as well as across Europe.

February was a big month in Canadian politics, with the launch of the SNC-Lavalin affair following revelations that Prime Minister Justin Trudeau’s office attempted to pressure then-Attorney General and Minister of Justice Jody Wilson-Raybould to stop the corruption prosecution of Montreal company SNC-Lavalin Group. The Liberals suffered a dip in support following this reveal, benefitting other parties. In particular, the Green Party saw a substantial rise in support early in 2019. The Liberals also indicated that they were considering providing pardons for minor marijuana convictions. In general, cannabis legalization and related policies continued to be a hot topic throughout the year, prompting both practical and philosophical debate.

Russian international relations figured prominently in political conversations throughout the year, with Vladimir Putin causing controversy by continuing to support Nicolas Maduro’s presidency of Venezuela, despite other countries recognizing opposition leader Juan Guaido as interim president. Meanwhile, others were left uneasy by the United States’ rapid recognition of Guaido, given a history of American intervention in Latin America. On February 1st, the United States pulled out of the Intermediate-Range Nuclear Forces Treaty (INF), a nuclear weapons pact between Russia and the United States. In Peru, Operation Mercury 2019 was launched to combat illegal mining in the Amazonian region of Madre de Dios, which borders Brazil and Bolivia.

In March, historical debates on religious neutrality were heightened with the CAQ’s tabling of Bill 21: An Act respecting the laicity of the State. This led to increased discussion of multiculturalism and the principle of reasonable accommodation.

The month also marked five years since Russia’s widely condemned annexation of the Ukrainian Crimean peninsula. While the international community continues to condemn Russia’s annexation, world leaders have also moved on to voicing concerns over other situations around the world. Facing threats of EU sanctions and pressure from other leaders, Barbados slashed its corporate levy from 30 per cent to less than 6 per cent in an effort to increase private sector investment and comply with international requirements.

In a more anticlimactic event, March 29th, the scheduled day of Brexit, went by without any major development.

The Canadian drama spurred by the SNC-Lavalin controversy reached new heights in April, when former Liberal ministers Jody Wilson-Raybould and Jane Philpott were removed from the Liberal caucus, forcing them to sit as independent members of parliament. This led to interesting debates over Canadian parliamentary conventions, including the strictness of party discipline and the centralization of power in the Prime Minister.

Political drama unfolded south of the border as well, as the long-awaited Mueller report was released.

In May, India held its election in the world’s largest display of democracy. Despite facing several challenges, Prime Minister Narendra Modi was re-elected. This was the first time in almost fifty years that Indian voters re-elected an incumbent candidate. In another major democratic demonstration, European voters elected their European Parliament.

Back in Canada, May was an active month for the labour movement, with Winnipeg bus drivers taking on an unusual form of collective action: they showed up to work, but didn’t enforce transit fares from passengers all day on May 14. In another move that benefitted Canadian labour, the United States lifted its protectionist tariffs on Canadian steel and aluminum.

In June, the controversial Trans-Mountain Pipeline expansion which will increase the volume of crude oil carried from Alberta to the BC coast was approved yet again by the Trudeau cabinet.

Further, in July, Prime Minister Trudeau requested an examination of “a full ban on handguns and assault weapons in Canada.” This move came largely in response to a recent upsurge in gun violence in Canada, most recently in the 2018 Danforth shooting, 2018 Quebec City mosque attack, and the 2019 Raptors parade shooting.

Meanwhile, Japan increased restrictions on exports to South Korea of chemicals and electrical hardware used in the production of high-tech devices. While the Japanese government claimed that this move was made due to security concerns, experts generally agreed that the export restrictions were more likely linked to domestic politics and unresolved historical grievances between the two countries.

Elsewhere, on July 21st, President Rodrigo Duterto of the Philippines commented that preventing Chinese nationals from fishing in the Philippines’ exclusive economic zone of the South China Sea was virtually impossible. Domestic and international criticism ensued, accusing Duterto of calibrated subservience to Chinese interests in the region.

Throughout July and August, protestors took to the streets in Moscow in reaction to the Moscow election authorities’ decision to block opposition candidates for the September Moscow City Duma Elections. More broadly, however, these protests – some of the largest Russia has seen in recent years – reflect a general growing discontent with Putin’s governance of the country, in particular in regards to the wavering economy and institutionalized corruption.

On the international stage, at the 45th G7 Summit, world leaders agreed to pledge $22 million of emergency aid to help Brazil battle wildfires in the Amazon rainforest, which had been raging since January. Brazil’s President Jair Bolsanaro rejected the offer, decrying it as a colonialist pretense engineered by French President Emmanuel Macron.

Global tensions continued in September. For one, September 1st saw the first exchange of fire across the Israeli-Lebanese border since 2006, raising concerns regarding stability in the region, in particular amidst increasing tensions between Iran and Israel.

Meanwhile, in North America, September was a month of domestic political controversy. On the 24th, House Speaker Nancy Pelosi announced that House Democrats would launch a formal impeachment inquiry against U.S. President Donald Trump over the Ukraine scandal.

Canadian Prime Minister Justin Trudeau, too, found himself in hot water when TIME magazine published photos of him in brownface. These photos threatened to undermine Trudeau’s “positive politics” image only several days after the official launch of the 2019 federal election campaign.

October was a big month for Canadian politics, as the 2019 federal election, to be held on the 21st, dominated the discourse. Parties competed on various platforms concerning issues such as the economy, environment, Indigenous policy, social policy, foreign policy, and immigration. As the MJPS series “MJPS Opinion: My Vote” demonstrated, each party was able to display strengths that appealed to voters. On election day, Canadians elected the Liberal Party to a minority government, securing a second term for Prime Minister Trudeau. October 21st marked not only the end of the Liberal Party’s majority in parliament, but it also concluded MJPS’ year-long election outlook series.

In the United States, the Democratic House passed a resolution 232-196 setting procedure for Trump’s impeachment process. Only two Democrats voted against the resolution, and no Republican backed it, raising concerns that impeachment proceedings would be derailed by political partisanship.

Meanwhile, Singapore began enforcing the Protection From Online Falsehoods and Manipulation Act, following a trend in Southeast Asia in which governments have been doubling down on fake news. While some praise these laws as protecting citizens from false information, others have criticized them as government censorship. In less controversial news, environmental activist Greta Thunberg continued to make waves during her tour of North America, although the exact means to tackle climate action remain disputed.

November 9th marked the 30th anniversary of the fall of the Berlin wall and the end of the Cold War. But protests in Hong Kong and Chile throughout the latter half of 2019, 30 years later, suggest that discontent with rigid and unresponsive governments did not disappear with the fall of Soviet-style communism.

In Canada, November was dominated by the aftermath of the October federal election. Most prominently, on November 20th, Justin Trudeau revealed the new Liberal cabinet, which included several positions seemingly aimed at appeasing Western voters.This move had good cause, considering the Liberal Party’s poor showing in the West which raised concerns that Canada is not only ideologically but also geographically divided.

Meanwhile, the Conservative Party’s failure to obtain a majority increased scrutiny for Andrew Scheer, whose continued leadership of the party was increasingly called into question. The Green Party, too, grappled with its relative underperformance, with Elizabeth May stepping down as party leader in early November. At a more fundamental level, the glaring disparity between the popular vote and the number of seats obtained in government created contention regarding the first-past-the-post voting system.

With the election in Canada concluded, a new one emerged in Britain, when Prime Minister Johnson announced the dissolution of Parliament and the launch of the Conservative election campaign, with a general election to be held on December 12th.

In further election news, MJPS launched its US election outlook for the 2020 presidential election, and interesting developments were already at hand. In November, Democrats scored big wins in Kentucky and Virginia, indicating a nationwide demographic shift in Democratic party support. This cause for Democratic optimism was further bolstered by the continued backlash against President Trump’s decision to withdraw troops from north-eastern Syria, which he had announced the previous month.

Australian politicians, in particular Prime Minister Scott Morrison, too, faced backlash in regards to their political decisions. The government’s relative inaction regarding the catastrophic bushfires which raged throughout November re-ignited criticism concerning Australia’s reluctance to take a clear stance on climate change.

2019 ended on a politically eventful note: in December, Andrew Scheer resigned as leader of the Conservative party. Boris Johnson, the leader of the British Conservative Party fared better than his Canadian counterpart, winning a large majority in the British parliament. This majority likely secures the path to Brexit which is currently scheduled for January 2020. Finally, in the United States, the House passed two articles of impeachment against Trump , making him only the third president to be impeached. The Senate trial is expected to begin in early January, ensuring, along with a possible January Brexit, that 2020 will begin on a political “high.”

2019 was an eventful year that gave us a lot to write about. In just 12 months, MJPS staff published four hundred articles. Covering a range of topics in international relations, Canadian politics, comparative politics, and political theory, MJPS demonstrated its steadfast commitment to Getting the Insight Out.

Thank you to the MJPS Editorial Board and all staff writers and contributors for making 2019 a year to remember. To our readers, thanks for joining us. See you next year!